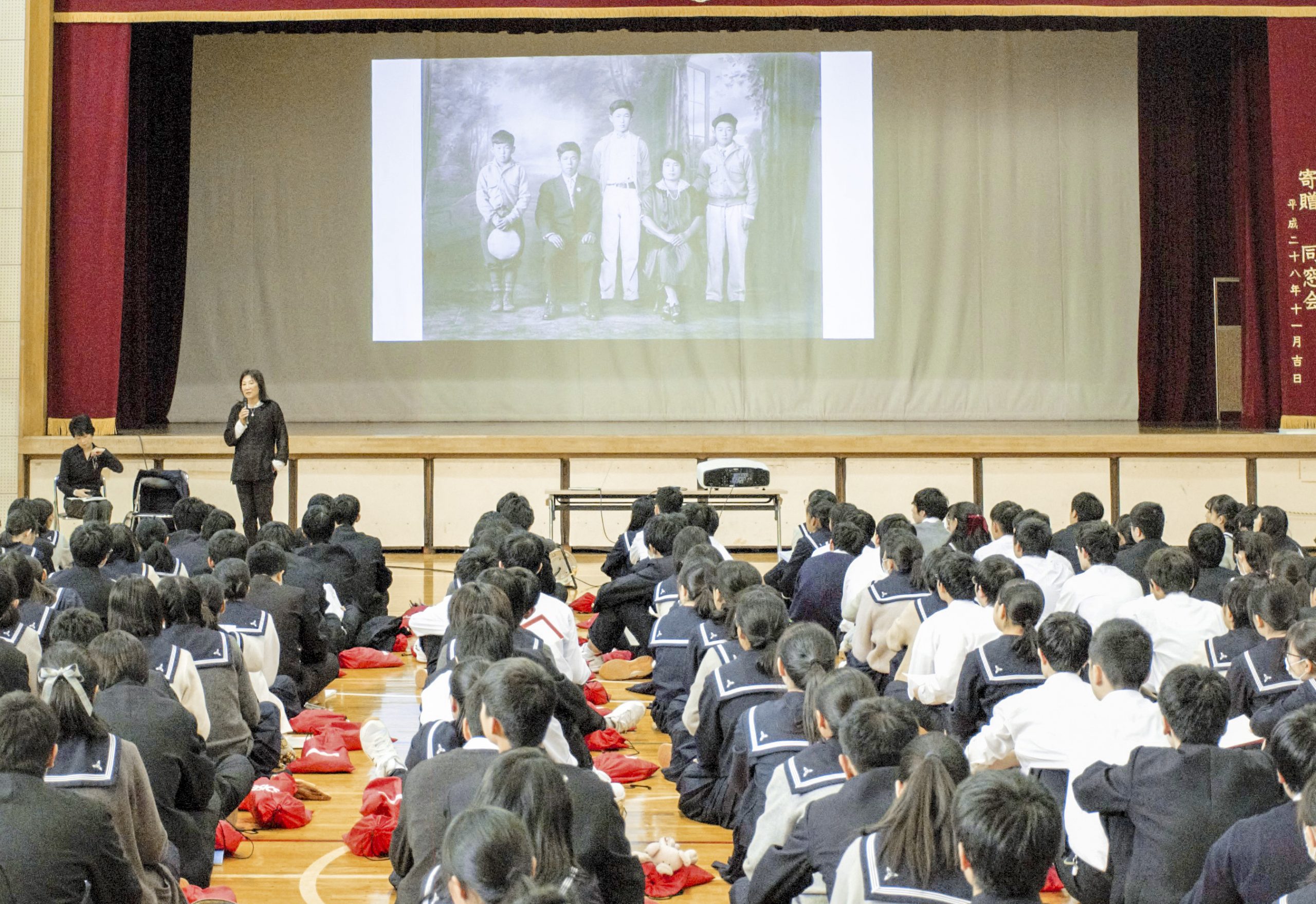 Shirley Ann Higuchi speaks to students at Komatsugawa High School in Tokyo during her recent trip to Japan as part of the Japan Up Close program. (Photo: Ray Locker)

The Japan Up Close Program brings Japanese American scholars and storytellers closer to their ancestral roots and teaches Japan more about its American counterparts.

TAKEO CITY, Japan — Sumiko Aikawa remembered the day her aunt, Chiye Higuchi, returned to her hometown in Japan’s Saga Prefecture in 1957 with dire accounts of her family’s suffering during World War II when they were forced to sell their farm at a major loss before being incarcerated at Heart Mountain, Wyo.

Aikawa, 89, wept while recounting her memories from that night 62 years ago in a meeting last month with Shirley Ann Higuchi, the granddaughter of Chiye Higuchi and the chair of the Heart Mountain Wyoming Foundation.

“Chiye visited me over in Saga, and she told me a lot about her life in the United States and the hardships,” Aikawa said through a skilled interpreter. “She talked about all of the harvests from the farm and how they and everything else was taken away from her.”

Higuchi visited Aikawa as part of the Japan Up Close program of the Japanese Ministry of Foreign Affairs. Along with Higuchi, three other Japanese American scholars and storytellers visited Tokyo for meetings with high-level Japanese government officials, talks to student groups and visits to their family’s ancestral homes in Japan.

For Higuchi, that meant Saga Prefecture on Kyushu, the southernmost of the four Japanese home islands. Chiye and her husband, Iyekichi, left Saga in 1915 for California, where they settled in San Jose. There, they started farming and eventually circumvented California’s Alien Land Law by buying a 14.25-acre raspberry farm in the names of their teenage sons.

They had to sell that farm in April 1942 before they were forced from California. They first went to an assembly center at the Santa Anita racetrack in Arcadia, Calif., and then to Heart Mountain, which is now home to a world-class museum at the site of the camp that once held close to 11,000 people. 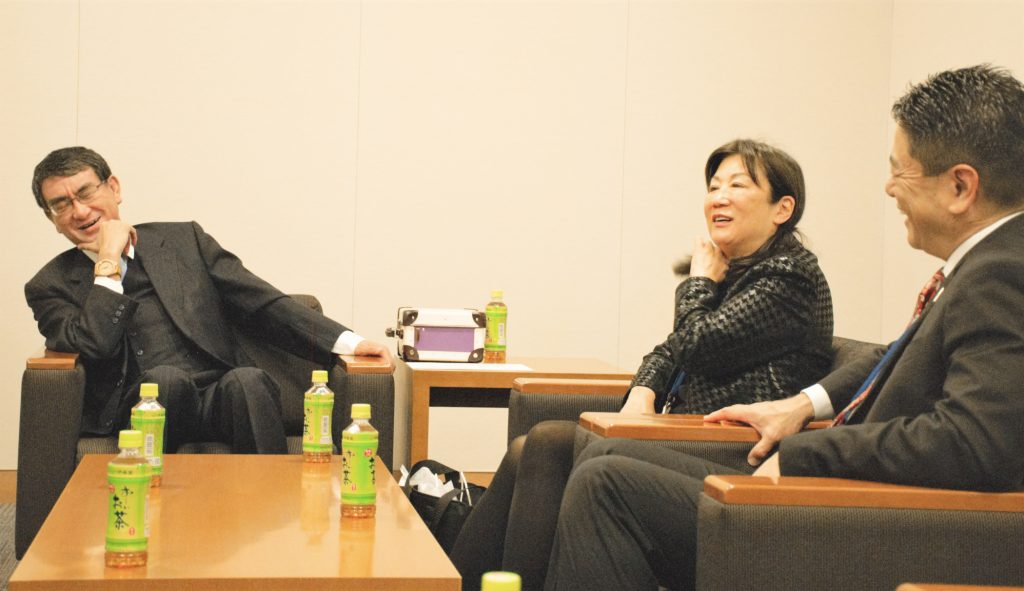 The Japanese American experience was a key element of the discussions that Higuchi and the three other participants — Go For Broke National Education Center President and CEO Mitchell Maki, University of Hawaii American Studies Professor Dennis Ogawa and Chicago-based storyteller Anne Shimojima — had with students at schools throughout greater Tokyo.

Higuchi, Maki, Ogawa and Shimojima traveled to multiple high schools across the Tokyo region, speaking to students who had heard little about the Japanese American incarceration. Many of the students asked questions that were similar to those from students in the United States – how did the people feel about losing their land? Did they talk about it later? Were they compensated for their losses?

A Need to Embrace

Japan needs to get closer to Japanese Americans and their experience, several Japanese government officials told the four storytellers.

“When I look back at my high school days, I knew nothing about the Nikkei (the Japanese Americans),” said Taro Kono, the minister of defense and previously Japan’s foreign minister in the government of Prime Minister Shinzo Abe. “Once in a while, a TV station would make something about the Nikkei,” but that was basically it.

Kono said his father, Yohei Kono, the former speaker of Japan’s House of Representatives, once made a speech in the Japanese House that “we need to know more about the Nikkei and to be much more involved in Nikkei affairs.”

It has taken 20 years, but the Japanese government seems to be picking up on the elder Kono’s lesson.

The Japan Up Close program is another step in the Japanese government’s growing outreach to the Japanese American community, which also included Ambassador Shinsuke Sugiyama’s appearance at the July Heart Mountain Pilgrimage with his wife and a team of Japanese diplomats. There, Sugiyama said all Japanese needed to learn more about the Japanese American incarceration during WWII.

Japan’s renewed cultivation of the Japanese American experience comes as the country faces the challenges of a shrinking population and risks posed by the economic growth of its neighbors, China and South Korea. Those two countries, as well as India, have strong ties to their diaspora communities in the United States.

This type of connection between the home country and its overseas community helps both communities, as it increases the flow of money and people from one country to another. Modi, in particular, has used it to bolster his standing with voters in India.

The ties between Japan and the Japanese American community have been damaged by the legacy of WWII, which separated the Nikkei from their ancestors’ native land, and the changing nature of Japan itself.

As an undergraduate at Georgetown University in Washington, D.C., Kono said he immersed himself in U.S. politics and history. He worked as a staff member and campaign aide for then-Rep. Richard Shelby, a Democrat from Alabama, during Shelby’s 1986 race for the Senate. Shelby won that race and later became a Republican. He is in his sixth term in the Senate.

But when he was preparing to graduate and look for a job in Japan, Kono said he was told by many Japanese companies that his U.S. degree counted for little with them. That is finally changing, he said, as Japan realizes it needs to embrace the rest of the world.

The group also met with State Minister Keisuke Suzuki of the Ministry of Foreign Affairs and Yutaka Arima, head of the North American branch of the ministry. They, along with Kono, asked the delegation whether the inward-looking policies of the Trump administration reflected a long-term change by many Americans or were a temporary phase in U.S. policy.

Suzuki, who is 42, echoed Yohei Kono’s call for a deeper relationship with the Nikkei community in the United States. “Many of the next generation of politicians in Japan have an interest and attention for Japanese American society.

“The reason is not just because the United States in an ally,” Suzuki continued. “Our Japanese American community is the sister community of Japanese society.”

Maki, whose group commemorates and educates the public about the valor of Japanese American soldiers during WWII and their contributions to society, told Suzuki that he and others in the group appreciated the chance to visit Japan and its key leaders.

“We would welcome any opportunities for you and the ministry to know how we can be of support,” Maki said.

Suzuki asked if the current administration of President Donald Trump, which seems to be turning inward from engagement with many foreign governments, represented just a blip on the radar or a long-term trend in U.S. affairs.

“Many think the United States will close its society and be tough on immigrants,” Suzuki said.

Shimojima called that trend “unfortunate,” while Maki said it was too early to tell if it would be a long-term trend, which would have serious ramifications to the U.S.-Japan relationship.

She cited the success of former Commerce and Transportation Secretary Norman Mineta, a former Heart Mountain incarceree, as an example of how to take adversity and turn it into a record of caring for others. “It’s a good lesson for the future,” Higuchi said.

Ogawa has an immediate connection to the Japanese American incarceration. He was born in the concentration camp in Manzanar, Calif., while his parents, Frank and Alice, were incarcerated. The Ogawas lived in Santa Monica, Calif., before and after the war.

Ogawa said his research into Hawaii’s Japanese American community has shown its contributions to not just that state but also the nation as a whole. He said Sen. Daniel Inouye and Sen. Spark Matsunaga were “great citizens of America, not just Hawaii.”

The ties between both countries is strong for many prominent Japanese Americans, Ogawa said. He mentioned the late astronaut Ellison Onizuka, who died in the 1986 space shuttle Challenger explosion, as someone who made a special effort to visit his ancestral areas in Fukuoka on the island of Kyushu to find closure.

It was through the Japanese government’s help that Ogawa and the three other participants in the program were able to connect with family members living in the areas their parents and grandparents left for the United States.

Shimojima said she found a name of her great uncle in her late mother’s address book, and the government was able to locate him at his home in Matsumoto Prefecture, which is in the mountains west of Tokyo. Its capital city, Nagano, was the host of the 1998 Winter Olympics.

“I thought our family had lost touch,” she said. “I’m so surprised and grateful” that they were able to re-establish the connection.

For Higuchi, the trip to Saga exposed her to part of her family’s history that she knew little about. For example, she did not know about her grandmother’s meeting with Aikawa. She also did not know if her Japanese relatives had heard anything about the incarceration.

The new information was particularly relevant for Higuchi, whose memoir and history of the incarceration will be released next spring by the University of Wisconsin Press. “Setsuko’s Secret: Heart Mountain and the Legacy of the Japanese American Incarceration” explores the effects of the mass imprisonment of 120,000 Japanese Americans on not just her family but also the country as a whole.

Higuchi also saw the place where her grandfather, Iyekichi Higuchi, was born in Saga and the temple where members of his family were buried nearby. It was a connection to a part of her history that she had missed before and was only highlighted by her work on behalf of Heart Mountain and research into the incarceration.

“If the Japanese government had not invited me to Japan, I would have lost this chance to connect with this vital part of my history,” Higuchi said.