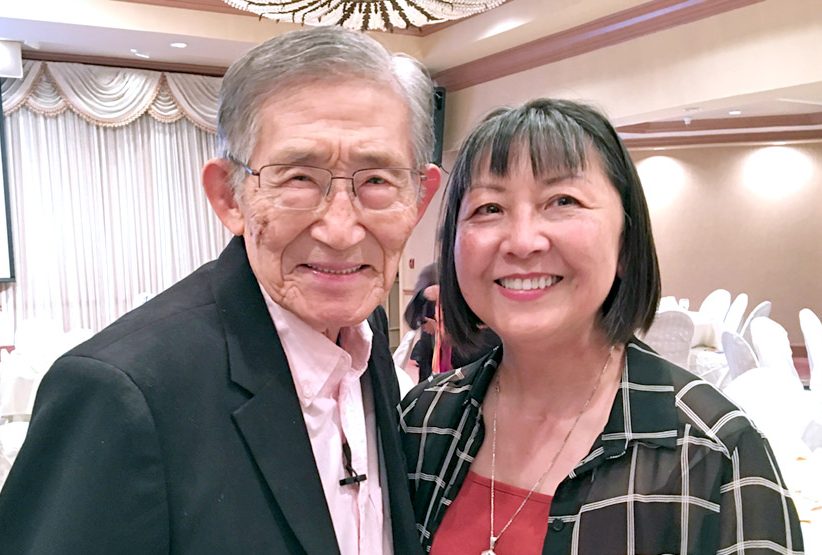 13 a Good Omen for K.W. Lee Center for Leadership

Journalist K.W. Lee and Ranko Yamada are reunited for the first time in some 40 years. (Photo: George Toshio Johnston)

When the K.W. Lee Center for Leadership held its 13th annual fundraising dinner at Koreatown’s Oxford Palace Hotel on June 8 in Los Angeles, the nonprofit decided to find future inspiration by looking back.

Part of that entailed celebrating the nearly five-year run of Koreatown Weekly, which was founded by K.W. Lee, dubbed the “godfather of Korean American journalism,” whose career achievements inspired the center’s name. The dinner also reunited members of the Koreatown Weekly’s staff and marked Lee’s 90th birthday.

Why revisit the Koreatown Weekly in 2018, which folded in 1984? Looking back on the newspaper, California State University, Northridge, journalism professor Taehyun Kim said Koreatown Weekly’s mission was “to raise community consciousness” and noted how in 2018 a proposal by the City of Los Angeles to convert a city-owned parking lot in Koreatown into a homeless shelter came about without any input from local residents and business owners, implying that the existence of a news outlet like Koreatown Weekly might have precluded such a unilateral act by the city.

As an investigative journalist working for the Sacramento Union, Lee is best known for a series of articles about Chol Soo Lee, a young Korean immigrant with a record of petty crimes who was improperly convicted and imprisoned for a brazen 1973 gang-related slaying in San Francisco’s Chinatown. (See related story here.)

In July 1979, K.W. Lee launched Koreatown Weekly, an English-language newspaper for the Korean American community that proved to be an enterprise ahead of its time. 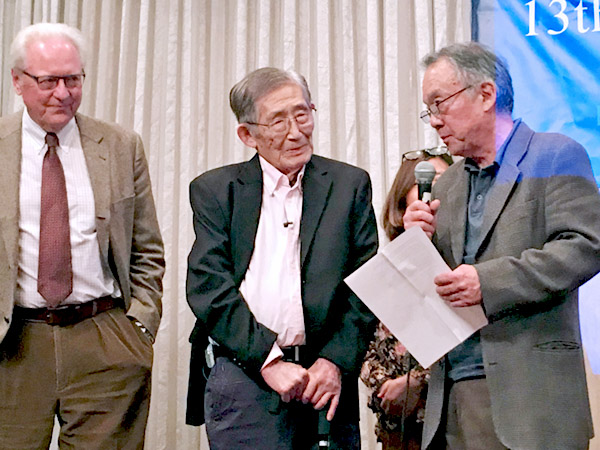 On a weekly basis, Lee and Chanecka drove nearly 800 miles from Los Angeles to Sacramento and back to produce Koreatown Weekly, doing prepress in Los Angeles and composing and printing the paper in Sacramento. But for that first issue, Lee and Chanecka used the equipment graciously provided by the Pacific Citizen and its then-editor Harry Honda.

The evening reunited Lee, Chanecka, Hagihara and staffers Sophia Kim and David S. Kim, with each sharing memories of the Koreatown Weekly era. Chanecka started the traipse down memory lane, recalling how over lunch at the China Moon restaurant in Sacramento, Lee said he wanted to start an English-language newspaper for Korean Americans across the nation. 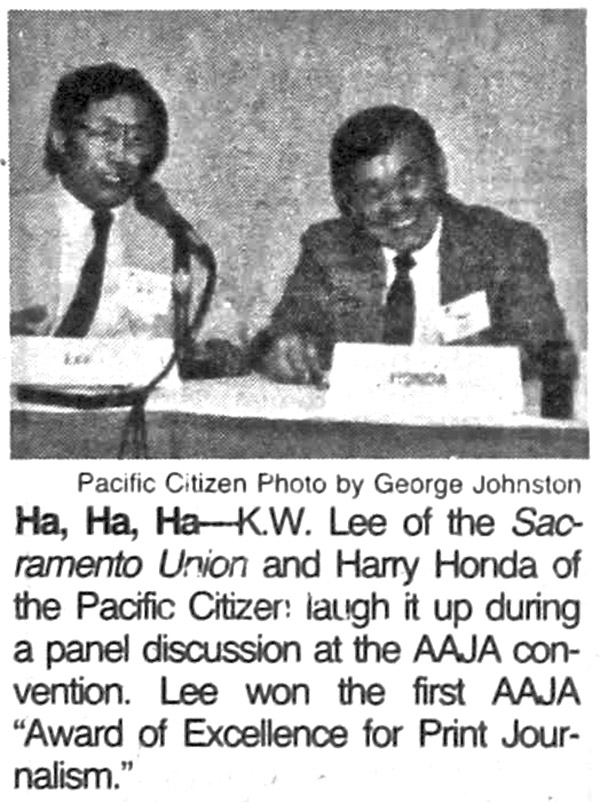 This reproduction of a photo appearing in an October 1987 issue of Pacific Citizen shows K.W. Lee and Harry Honda at the first AAJA convention.

Chanecka related the first night of production at the Pacific Citizen with “Harry Honda guiding us on a single Compugraphic” (computer photo typesetter) and how they didn’t finish until about 3 a.m. After that, they realized they would have to change how they produced the paper.

Hagihara, who would later work for the Los Angeles Times, looked back fondly at his experience, remembering details like trapping more than 30 mice over the years at the Koreatown Weekly’s office space near Los Angeles’ Koreatown, as well as the numerous trips made in the company car — a Ford Pinto station wagon — used to trek back and forth between L.A. and Sacramento.

“To me, working with Lee and Chanecka was the most fun I ever had in journalism, and I was lucky enough to realize it at the time,” Hagihara said.

Sophia Kim remembered meeting Hagihara when he came to report on the Center for the Pacific Asian Family, where she was working at the time, for Koreatown Weekly. Intrigued, she got the address for the office. She drew laughs when she said, “I just knocked on that door the next day — and I got hired because he [K.W. Lee] hires anybody off the street!” 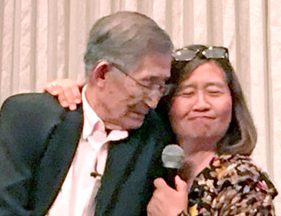 David S. Kim noted that while he didn’t continue to pursue journalism, Lee “instilled in me his passion for activism and public service and community service.”

Lee, Chanecka, Hagihara, Sophia Kim and David S. Kim were presented appreciation plaques by the K.W. Lee Center for Leadership for their work on Koreatown Weekly. They also each received a collection of all the issues of the newspaper hardbound into one book.

Preceding the reunion was a spoken word performance by Natalie Castaneda and David Contreras. The reunion was followed by In Khang Hyun Jeong Shim singing “Arirang,” Korea’s unofficial national anthem and the presentation of a birthday cake for K.W. Lee. Hanah Lee Cook then led a toast to her grandfather and shared her childhood recollections of him.

The closing remarks were made by K.W. Lee, who remembered the man he helped free.

“Do you know why Koreatown [Weekly] was born? Because I spent two years as a reporter at the Sacramento Union to bring out the Chol Soo Lee murder case in Sacramento. … My management said, ‘K.W., we can’t let you do anymore because nobody will give a damn to Chol Soo Lee,” said Lee. “‘We cannot afford to cover Chol Soo Lee.’ I said, ‘All right, dammit. I’m going to start my own newspaper.’ That’s how Koreatown was born.”