This year’s theme was “Advocacy. Inclusion. Action.” The theme reminds us that the fight for civil rights is real and ongoing. Diversity in America is acknowledged and encouraged. It will take our continued advocacy, inclusion and action to help make a better nation and world.

Serving as convention hosts were the three Utah JACL chapters and their presidents: Mount Olympus, Dick Mano; Salt Lake, Michael Iwasaki and Devon Matsumoto; and Wasatch Front North, Sandra Grant. The co-chairs for the convention were Lynne Aoyama, Sandra Grant, Sherrie Hayashi and Floyd Mori. Janet Komoto, IDC Governor, was on the committee. Marissa Kitazawa, VP for General Operations on the JACL National Board, worked closely with the local committee, as did National President Jeffrey Moy, Executive Director David Inoue and other members of the JACL staff.

Wat Misaka, a Utah legend who was the first nonwhite person to play in what is now called the National Basketball Assn. after being drafted by the New York Knicks, was honored by the organization with a President’s Award. Also receiving the President’s Award was Arlene Inouye, an activist and educational leader from Los Angeles. U.S. Sen. Mazie Hirono of Hawaii was given the Ralph Carr Award.

The Japanese American experience of incarceration and subsequent redress, which was achieved with the passage of HR 442 and the Civil Liberties Act of 1988, was one of the main topics of the convention.

The egregious act against Americans and immigrants of Japanese heritage during World War II of being imprisoned in concentration camps was a matter of discussion in plenary sessions, workshops, business sessions and films.

With the participation of the  Japanese American Confinement Sites Consortium, there was also an emphasis on camp preservation. The JACL and other organizations have partnered with the JACSC to ensure that funding will continue for the preservation of the camps to teach and educate others. 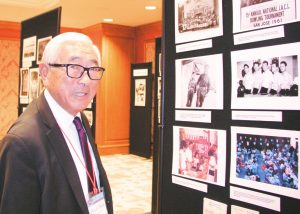 Throughout convention, attendees enjoyed Open Mic night with the youth, a golf tournament, visits to the Family History Library and the Tabernacle Choir, a hike and films. The convention ended with an optional trip to the site of the Topaz camp and the new Topaz Museum in Delta, Utah. The bus ride started early on Aug. 4 with more than two busloads filled with participants.

In addition, many others donated, purchased tables of 10 for the banquet and placed ads in the program booklet. Thanks to all who contributed, including the exhibitors, vendors, committee members, speakers, filmmakers, color guard, volunteers and hotel staff.

It is always great to have Sec. Norman Mineta and his wife, Deni, participate in the conventions, as well as former Congressman Mike Honda. Dr. Brian Shiozawa, who is a regional director for the U.S. Department of Health and Human Services in the current administration and a former Utah State Senator, and his wife, Joye, attended the Sayonara Banquet.

In keeping with the spirit of diversity, Virgil Johnson, a Goshute Native American, presented a blessing at the Sayonara Banquet. Elder Gary Stevenson of the Quorum of the Twelve Apostles of the Church of Jesus Christ of Latter-day Saints gave remarks. The Honorable Midori Takeuchi, Consul General of Japan in Denver, spoke at the banquet and went on the Topaz tour.

Utah Attorney General Sean Reyes and Mayor Jenny Wilson of Salt Lake County spoke at the Opening Welcome Reception, as did Utah State Sen. Jani Iwamoto, who introduced other senators and representatives from the State of Utah.

Former JACL staff members Ron Ikejiri, John Tateishi and Ron Wakabayashi, as well as past National President Frank Sato were on hand to share their experiences on redress. Other former JACL staff and fellows who attended the convention were Kenzie Hirai, Paul Igasaki, Brandon Mita (currently general counsel on the JACL National Board), Debra Nakatomi, Jean Shiraki and Amy Watanabe.

Past National Presidents of the JACL who were in attendance were Ken Inouye, David Kawamoto, Mori, Larry Oda, Sato, Floyd Shimomura and Judge Raymond Uno.

In addition to the past national presidents and their spouses, it was good to see some of the stalwarts who have been supporting JACL conventions for years, including some current and former members of the National Board of the JACL: Toshi Abe, Michelle Amano, Sheldon Arakaki, Jim and Thaya Craig, Jim Duff, Larry Grant, Mas and Marcia Hashimoto, Marion Hori, Paul and Lou Igasaki, Judge Dale and Debbie Ikeda, Nicole Inouye, Jeff and Linda Itami, Miyako Kadogawa, Don Kajioka, Stanley Kanzaki, Mark and Lisa Kobayashi, Tom Kometani, Chip and Setsy Larouche, Greg Marutani (who very deservedly received the Ruby pin), Ted and Yeiko Nagata, Terry and Leah Nagata, Travis Nishi, Tom Nishikawa, Walt Sato, Marielle Tsukamoto, Kai Uno, Paul Uyehara, Valerie Yasukochi, Sadie Yoshimura (who provided the gifts for the Opening Reception) and many others.

Mary Kawakami, a 106-year-old member of the Mount Olympus Chapter, was recognized. We miss Shea Aoki, who had attended every JACL convention ever held until she could no longer attend in her 90s. Shea is now 104 and still lives in Seattle.

Notably missing was Richard Amano, a longtime supporter of the JACL who was “always” at the conventions with his daughter, Michelle, and his mother-in-law, Etsu Mineta Masaoka, until her passing. Our sympathies to Michelle for the loss of her father in January 2019. Our condolences to the families of other JACLers who have passed on since the convention in Philadelphia one year ago.