Food is the Foundation of JA Culture 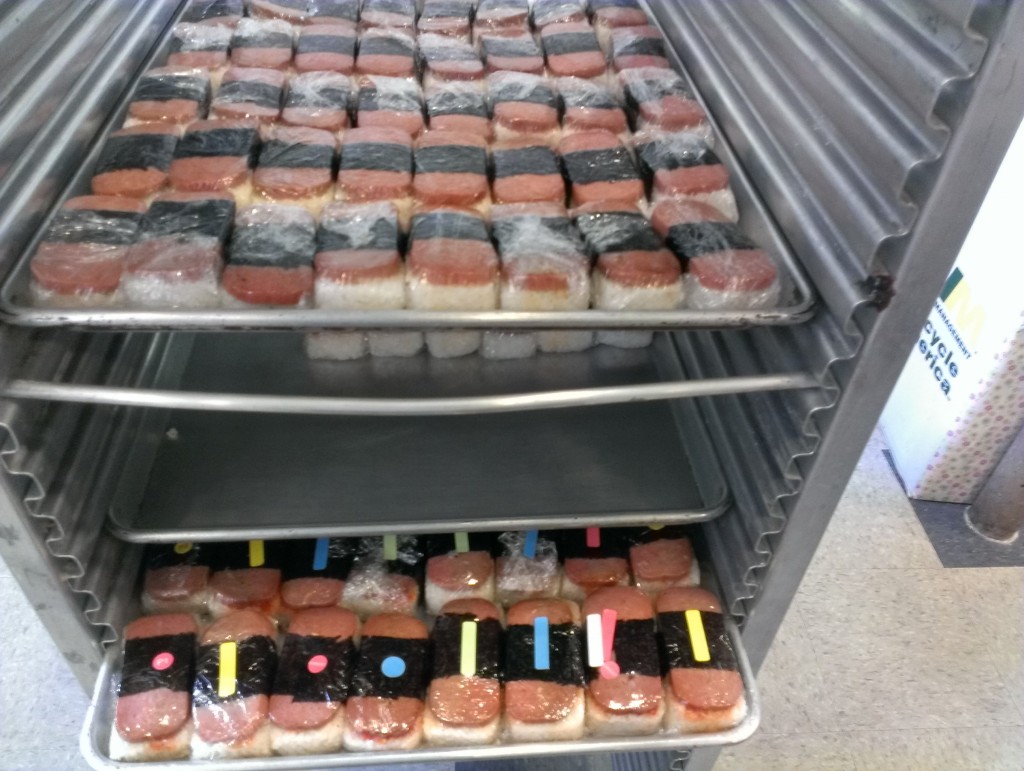 Spam musubi made for Sakura Matsuri by the ladies at the Denver Tri-State Buddhist Temple. Photo by Gil Asakawa

My friends — and my “friends” on social media — know that I’m a foodie. I love food: good food, fast food, ethnic food, cheap eats, greasy diner food, fine dining and, most of all, Japanese food. And I post photos of food online to prove how much I love it.

Especially for ethnic communities, cuisine is a cultural gateway and an archive for our shared identity, stored in taste buds. I love the range of Japanese food most of all because of the culture the cuisine encompasses, from the most artisan “Washoku” — the traditional style of Japanese food that was recently named by UNESCO to the “List of the Intangible Cultural Heritage of Humanity” — to Japanese American street treats like Spam musubi.

I submit that the strongest link between Japanese and Japanese Americans is rice. We seem genetically imprinted with the knowledge of cooking rice (many of us still use the knuckle rule to measure how much water goes in the cooker) and, of course, we all eat rice. And not to be prejudiced, but we prefer white rice over brown, jasmine or other more exotic strains.

We complain (“monku”) if we’re served rice that doesn’t have the right clumpy texture so we can pick it up with chopsticks. None of this Uncle Ben’s crap. My mom used to make a face and call that stuff “porro-porro” rice because it wasn’t sticky and needed a fork — or gasp! a spoon — to eat it.

We love the crunchy, burned bits of rice at the bottom of the cooker, and we love using leftovers to make comfort-food fried rice with bacon, frozen vegetables, eggs, soy sauce and whatever else is lying around.

We eat rice with ketchup — my mom adds small bits of chicken and some veggies and calls it chicken rice. We mix a raw egg with soy sauce and drizzle it over hot rice. OK, maybe in today’s health-conscious era I’m the only one I know who still does that once in a while, but then again, I also love natto over rice.

And rice isn’t the only gastronomic tie that binds Japanese Americans together.

JA culture is a fascinating cross-cultural mash-up. We get some of these crazy ideas from the fertile minds of multiple ethnicities in Hawaii. Spam musubi, one such invention, combines the U.S. military’s canned meat with rice and nori seaweed to make an Americanized cousin to sushi. A favorite dish at many Hawaiian restaurants and some stateside JA diners is Loco Moco, which is a hamburger patty draped with a fried egg or two, served atop a mound of rice and covered with brown gravy.

To add to the cultural diversity, I make an addicting snack that coats Mexican corn chips with soy sauce and sugar, and people at parties call them “crack chips.”

Chop Suey, a Chinese American invention, is etched on a historic sign in Los Angeles’ Little Tokyo. It’s an apt and accurate reflection of how Japanese Americans have dined at Chinese restaurants for more than a century as our community’s “going out” food of choice. While other Americans think first of Chinese for takeout, we head to Chinese restaurants to eat in, for banquets and family get-togethers like after funerals.

So, chop suey and chow mein, not necessarily authentic Chinese food, but traditional in America, are part of our cultural DNA as much as inari sushi (which JAs call “footballs” and Japanese go “huh?”).

Teriyaki chicken or beef are big parts of our community. What JA organization or church hasn’t cooked up hundreds of pounds of teriyaki chicken for a fundraiser? And our idea of sushi is more the “footballs” and futomaki, the fat rolls with six or seven ingredients, not the upscale sushi with expensive sashimi. Sure, we love to eat fancy sushi when we can afford it. But we cook and eat so much more than the stuff most people imagine when they think of Japanese food.

What are some of your favorite Japanese American family or community foods? Send me an email with your dishes of choice, and your family stories about food: gil@nikkeiview.com. Send me photos, because if you’re like me, you can’t help but shoot a picture before you eat!