442 Vet Yamamoto Passed Over by Palo Alto School Board

Opponents of Naming a School After the Nisei Prove Victorious 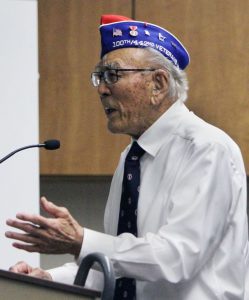 Lawson Sakai, who served in the 442nd RCT, speaks March 27 in favor of renaming one of two Palo Alto, Calif., middle schools in honor of Palo Altan and fellow 442 vet Fred Yamamoto, who was killed in combat during WWII. (Photo: Brad Shirakawa)

The vote appears to have ended the bid to name one of the middle schools after Palo Altan Fred Yamamoto, who volunteered from a concentration camp for Japanese Americans to serve in the Army during WWII. He was  killed in action as a member of the 100th Battalion/442nd Regimental Combat Team.

Although Yamamoto had at one point in the process been said to be the No. 1 contender among the six finalists and two place names, vocal opposition by some local residents that appeared to be comprised mostly of recent immigrants from the People’s Republic of China apparently succeeded in blocking the bid to rename the school after Yamamoto.

The reason given was that he shared the same last name as Isoroku Yamamoto, the Japanese admiral who planned the attack on Pearl Harbor in the then-U.S. territory of Hawaii. Opponents claim the Yamamoto surname was anathema to Asians from China, Korea and Southeast Asia.