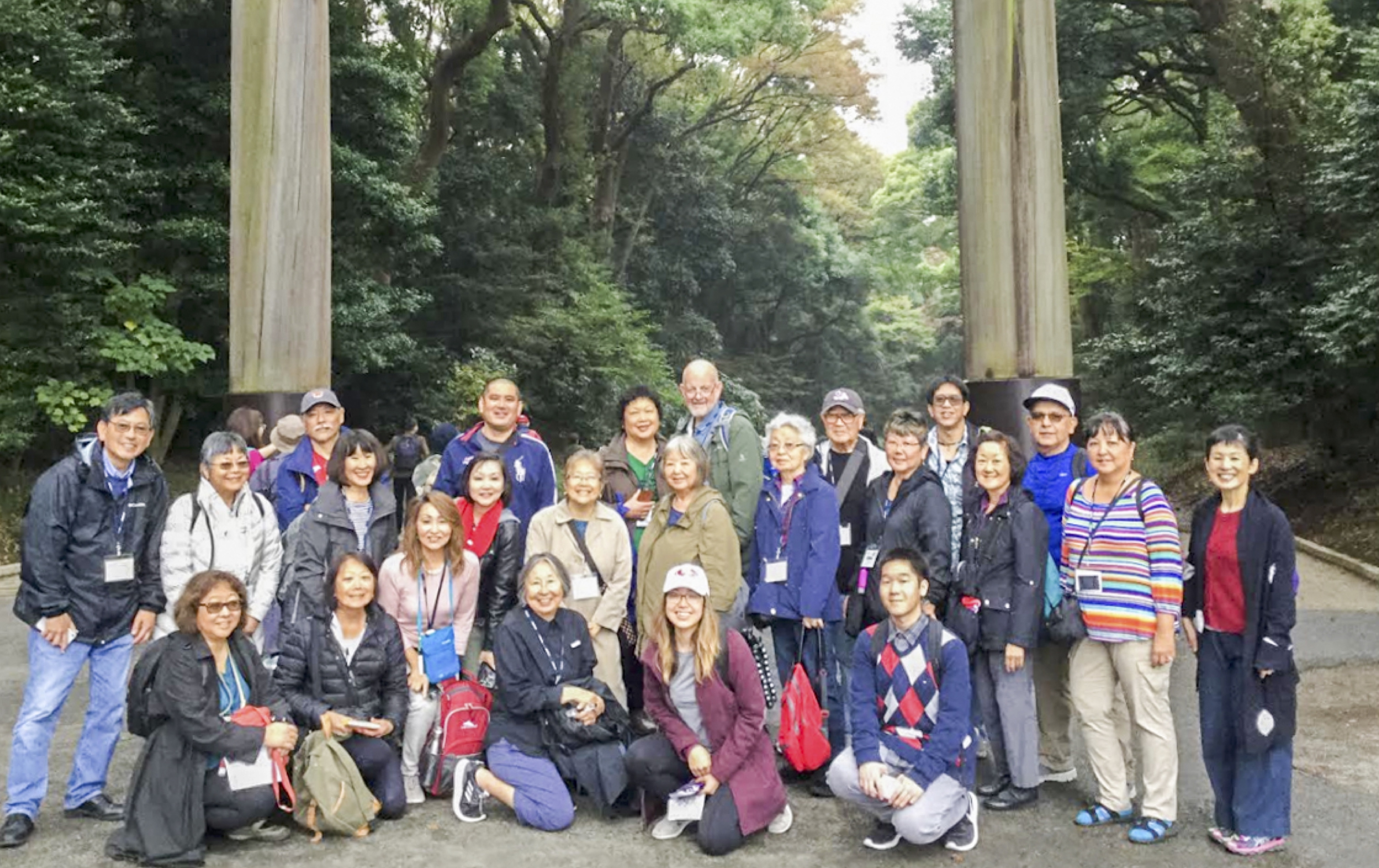 A Bridging Opportunity: Featuring the Best of the Best in Japan

JACLers fron the NCWNP recently traveled to Japan, a visit that was for some a trip of a lifetime.

Twenty-two JACL travelers from the NCWNP District recently embarked on a unique trip that created special memories to last a lifetime.

‘There are so many opportunities for youth to travel to Japan … what about adults and older Sanseis?” “Are there Sanseis still affected by the World War II incarceration of being taught that it was not good to be ‘too Japanese?’” “Are there a lot of Sansei who have never been to Japan? Why?”

These questions posed by JACLers led to a Northern California-Western Nevada-Pacific District JACL trip to Japan, one that was specifically designed for the first-time Japan traveler, but with enough flexibility in the itinerary to attract even the most-frequent Japan traveler.

While there are other tours with a similar itinerary (Tokyo, Yokohama, Kamakura, Hakone, Kyoto, Hiroshima, Miyajima Island), the concept of “bridging” can’t be found in a commercially coordinated trip. This “bridging” opportunity is something that was unique, special and memorable for the 22 JACL travelers who attended the recent 2018 NCWNP District JACL trip to Japan from Nov. 6-17, 2018.

Pam Yoshida and Meg Mizutani, NCWNP representatives to National JACL’s United States-Japan Relations (US-JR) committee, created this concept more than two years ago in order to provide an opportunity to visit Japan for Sansei who have never traveled there. The intent of the trip was to provide the seasoned Japan traveler with flexibility to plan his/her own itinerary on “open” days on an otherwise “best of the best” Japan tour. The result was a fast-paced tour that included every mode of transportation (ferry boat, shinkansen train, streetcar, subway and taxi) and some of the most popular shrines, temples and castles in Japan.

“I knew this was going to be a great group when we got to our first escalator and as we rode up, I yelled out, ‘Left side,’ and everyone shifted over to the left,” said Yoshida, who made her fifth trip to Japan with the group. “One goal was to show that Japan is easy to navigate, and at the end of the trip, several first-timers indicated that they would like to go back again — by themselves (the NCWNP had the welcome assistance of several tour guides and local friends)! I didn’t have any expectations other than to return everyone back to the U.S. safely!”

On the first full day in Japan, the NCWNP group planned a guided tour of the Edo Museum, Asakusa (Sensoji Temple and shopped along Nakamise), then to Kappabashi (Tokyo’s kitchen district) to create wax-replica food followed by a Chanko Nabe dinner in the Ryogoku area famous for its history of sumo wrestling.

“The Japan JACL chapter were gracious and generous with their time and commitment to this trip, and it was wonderful to see so many of them attend our joint activities,” said Yoshida.

Following a day of visiting Senkakuji (the shrine of the 47 Ronin), Meiji Jingu, Harajuku, Omotedando and Shibuya, the group joined the Japan JACL chapter in the evening, with one of their monthly activities, an ESS (English Speaking Society) session with native Japanese speakers.

Several groups of three to six persons combined with NCWNP and Japan JACL members to discuss their Japanese American history, which also soon deviated to conversations of common interests. Great food and snacks coordinated by the Japan JACL chapter

followed the activity, and presentations of omiage from the Japan chapter and NCWNP members were presented by Debbie Yano (Japan JACL) and Yoshida (NCWNP).

The following day, there was a choice of three planned tours: The Tokyo National Museum in Ueno Park (led by Japan chapter member Takamichi Go, a Japan history instructor), the Samurai Museum (led by Gordon Koo, West Valley JACL), Odaiba Mega-Web Museum (led by John Ino and Debbie Yano of the Japan JACL chapter) and an afternoon of Kabuki theater at Kabuki-za (led by Joyce Iwasaki, San Jose JACL). The day ended with a fabulous Enkai-style dinner in Ginza led by Kristy Ishii, where Japan JACL chapter members and NCWNP District members ate, drank and exchanged lively discussions about identity, among other topics.

After three full days in Tokyo, the group traveled to JOMM (Japanese Overseas Migration Museum) in Yokohama with a tour by museum curator Shigeru Kojima. This museum is a highlight of the JACL youth Kakehashi trips and is often the “starting point” of understanding the sojourn of the Issei to the Americas.

The day continued to Kamakura and ended in Hakone for an evening of ryokan-style accommodations, with several travelers visiting the onsen at least three times before departure the next morning! The group’s Hakone stay was enriched with a short cruise across Lake Ashinoko, then to local craft learning: Yosegi Zaiku (wooden puzzle box making), fried kamaboko making at the famed Suzuhiro kamaboko factory and sampling and touring of a small eighth-generation family owned sake brewery, Inoue Shuzo Hakoneyama.

The next destination was Kyoto. The NCWNP JACL group was among thousands of visitors in Kyoto, as fall is a popular time of year to visit Japan.

“Chisa Matsunaga, who is a student in Osaka, spent the entire time with us in Kyoto to help us tour since all the activities there were optional,” said Yoshida.

Among the first destination points was the famed Golden Pavilion. Arriving before busloads of school children, the group was first in line at Kinkakuji temple.

After a spectacular early-morning view of the temple and surrounding grounds, an excursion to Arashiyama followed, where the group opted to see the bamboo forest and monkeys on the mountain. They then took a trip to Nijo Castle.

The next day, the trip participants went to Kiyomizu-Dera, Nishiki Market and then chose between an afternoon at Fushimi Inari or lantern making with a family who is known for its hand-crafted lanterns throughout Japan: Kobishiya Chube: Kojima Shoten.

Traveling by shinkansen the next day, the breathtaking Himeji Castle was on the itinerary while enroute to Hiroshima. Here, the group toured one of the best-preserved military castles in Japan in the beautiful town of Himeji. It was late afternoon by the time the group arrived in Hiroshima.

The late afternoon stroll to the Hiroshima Peace Memorial was sobering. In some ways, the visit at the end of the day was an appropriate time to visit this memorial, as this was a turning point of how the world and many of the group’s lives were changed forever. The devastation of the atomic bomb is unimaginable and the urgency of peace was a common theme, along with resilience.

The next day was an open day to tour Miyajima Island. The opportunity to walk up to the beautiful red torii gate at low tide was rare. Many enjoyed a relaxing day touring the island and its many delicacies of street food, grilled oysters and visits to the many temples on the island. By the time the group left, high tide surrounded the island, immersing the famous torii gate in water.

In the meantime, others planned adventures on the final day in Hiroshima, which included connecting with their family and heritage. Gilroy JACLers Lily Kawafuchi and June Otaguro reconnected with cousins whom they had only met once before. Teruko Takemoto of the Selma JACL, accompanied by two nieces and a nephew, visited her mother’s gravesite in Hiroshima. Unexpectedly, she was reconnected with an aunt by a local police officer. And Stockton JACLer Karen Sakamoto ventured to an area in Hiroshima where she was raised to find that progress and development had displaced her neighborhood. This continuation of “bridging” was a memorable way to end the trip, and these amazing experiences became a part of all of the group’s experiences.

The Japanese tradition of omiyage also became a common practice, with trip participants sharing gifts among themselves and others throughout the trip. While many are new JACL members, perhaps this can be a common bond of a shared experience that was not obvious until the trip began.

“Favorite memories included seeing our group members interact with our tour operators by giving omiage or taking pictures with them,” Yoshida said. “Nearly two-thirds of the group had never been to Japan and were very overwhelmed in the beginning, but felt very comfortable at the end of the trip.”

Many thanks to the NCWNP District and NCWNP District Governor Carol Kawase for their support and encouragement in planning this memorable trip to Japan. Special thanks to the Japan JACL chapter and Japan chapter Co-Presidents John Ino and Kristy Ishii, and to Debbie Yano for suggestions and providing the “bridging” component of this trip. It was a great pleasure to make the connections with you and meet members of the Japan chapter! Thank you, too, to Kintetsu International, who handled the travel arrangements (local General Manager Maki Hoshino assisted the group on the trip). This trip would not have been possible without all of you.

“I’ve gotten inquiries from several people about this trip from other (JACL) districts, and while I LOVE the cities that we went to, there is so much more of Japan to explore,” said Yoshida. “Japan is so diverse and regional. So, if NCWNP plans another trip, the itinerary might be different, but this would be more challenging since the places we went to were easy to navigate. I’ll be evaluating this in the next few weeks with the Japan JACL chapter members, NCWNP District Council and our trip participants will be meeting for a trip reunion this month — we’ll evaluate all of this.”

For some attending this trip, Japan had never been a travel plan before. But for all, it is hoped that this will be one of many trips to Japan. While the destinations the group traveled to were among the most-popular and most-frequented places to visit in Japan, the experience to travel as a JACL group was unique.

“My favorite memories,” Yoshida recalled, “are all the times that I saw members of our group ‘connect.’ ”