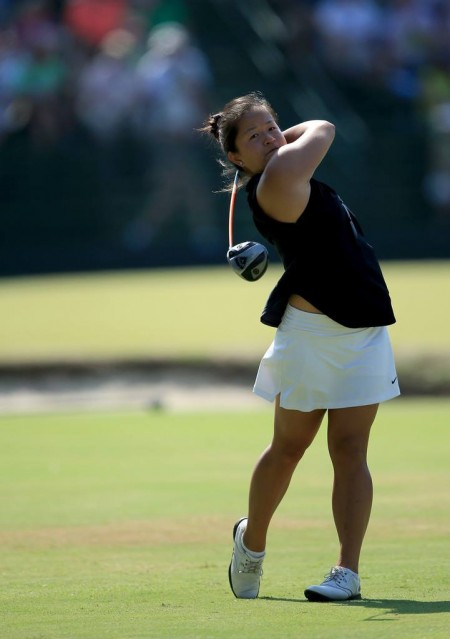 Study abroad plans were canceled on short notice. Marissa Chow traded a month in Pepperdine University’s Lausanne, Switzerland, house for a week in Pinehurst, N.C., to compete recently in the U.S. Women’s Open.

Chow won the sectional qualifier by three strokes at the Oak Valley Golf Course in Beaumont, Calif., on May 14. “I was shocked,” said the Iolani High School graduate. Although her Pepperdine golf coach, Laurie Gibbs, said she wasn’t surprised at all: “She definitely has a game that could qualify … . Her game has matured, she’s an excellent ball striker.”

The U.S. Open is one of the major championships in professional golf. Competing in the tournament pitted Chow up against the best in the world — the likes of No. 1 Stacy Lewis and the eventual 2014 champ, fellow Honolulu native Michelle Wie.

Chow described stepping into the hospitality tent upon arrival as “surreal” and “humbling,” as the pros, collegiate players and younger qualifiers mingled.

Rather than bow down to the initial pressure, Chow stepped up and swung for the fences. Playing at arguably the most challenging pro golf course, Pinehurst No. 2, she birdied the first hole of Round 1.

And Chow didn’t stop there. She birdied the second, fifth and sixth holes. Then, at the seventh, she marked 1-under on a par-3 to steal the lead from Lewis.

“When she tied for the lead and went ahead, I think that really strengthened her self belief . . . I had tears in my eyes,” said Hunter. He added that “seeing her smile” in that moment “was just heartwarming. I’ll never forget that.”

Their group rounded out the last tee time, so without taking a glance at the leaderboard, Chow knew the score to beat: 3-under. “I hit every shot as if it was my last,” said Chow.

Chow’s mother (Rittenhouse’s sister) died of breast cancer before Chow started high school. Rittenhouse said that on the course, to keep things light, she made comments like, “Thanks, mom,” and, “Mom must have been watching on that hole.”

Despite the calming tactics, nerves inevitably got a hold of Chow in her first crack at the U.S. Open.

“I used to look at the leaderboard, and I would fall off because your heart beats a little faster, and you try to protect something you don’t have,” said Rittenhouse. “I know the process that can happen and did happen. It’s something you can’t teach.”

On top of the leaderboard pressure, Chow also faced another type of distraction she had never encountered before: media frenzy.

Anyone threatening the lead of the No. 1 golfer in the world — be it an amateur Pepperdine junior — is going to garner attention. Rittenhouse said at about the sixth hole, the cameras began to flock around their group.

Chow said she could feel herself tensing up as the ESPN2 cameras and high shutter speed DSLRs began following her every move.

Then, the cameras cleared, and, as Rittenhouse puts it, Chow “got back to herself.” She finished the first round 6-over, the second round 10-over and missed the cut.

However, Chow left the course undaunted. Rittenhouse said that once they were back at home, settled on the couch, the first thing Chow asked was, “What do I need to work on?”

“I never walk away from a tournament not learning something,” said Chow. She said that overall she felt the U.S. Open gave her a new perspective. Holding the lead for that moment in time opened her eyes to the fact that she has the skills to compete with the best in her sport.

At around 8 years old, Chow started playing golf thanks to Rittenhouse, who introduced Chow’s mom to the game. The two became members at the Oahu Country Club. Hunter works at the club and said Chow and her mother enjoyed going out on the course together.

Additionally, Chow was involved in gymnastics, volleyball and basketball, but chose to focus on golf.

Physically, Rittenhouse recalls being amazed at how coordinated Chow was and how she had incredible upper body strength combined with a lengthy stature.

One major differentiating factor that separates Chow from the bulk of youth athletes is that her parents didn’t force her to practice.

“It’s always been on me,” said Chow. “I think that’s why I still really, really thoroughly enjoy it.”

Aside from following the old adage of “practice makes perfect” to improve her game, Hunter noted she has an innate talent.

“She’s a natural. Golf comes very easily for her,” said Hunter. “She works hard, but she can take a break of a month and come back just where she left off. She can maintain that tempo. I think it’s a gift— her ability to focus.”

In high school, she hit the ground running, winning the Interscholastic League of Honolulu (ILH) title as a freshman. As a senior, she led the girls’ golf team to the league championship, and she was named ILH’s Player of the Year.

Riding on that success, Chow chose to attend Pepperdine University in Malibu, Calif. Her reasoning was that she wanted to be in the Southern California area, she liked the school’s values and enjoyed the university’s coach.

She entered the collegiate level with a splash, earning All-West Coast Conference First Team honors in her first two years. This year, she was also selected as an All-American, and along with that, the Pepperdine women’s golf team claimed its 13th consecutive WCC league title.

Considering the undeniable success, Hunter said he doesn’t believe Chow has been given the media recognition she deserves. “She has always been under the radar, even in Hawaii,” said Hunter. He explained how stars such as Michelle Wie and UCLA All-American Stephanie Kono often leave Chow overlooked. “I always thought she was best in the group. I bet one day people are going to see that. This is just the beginning.”

Perhaps part of the reason why Chow doesn’t typically dominate the headlines is her coy personality and her tendency to underestimate her own talents.

“She is very humble,” said Hunter. “She will not talk about herself or what she’s accomplished.”

For instance, when Rittenhouse got the call from Chow asking her to caddy, Rittenhouse said she was excited but totally caught off guard. She said Chow had never mentioned trying to qualify for the U.S. Open.

Rittenhouse said she had told Chow earlier in the season that she “has all the tools necessary to compete” at the pro level.

“My coaches would tell me, ‘You’re really good, you have so much talent. You can be one of the great players,’” said Chow. “I never really believed them. I thought they were just saying that to make me feel good.”

As Chow has advanced and accomplished increasingly greater feats, she admits that she has a heightened sense of confidence. She says she wants to try qualifying for the U.S. Open again, and that she’ll work toward going pro after graduation as well, depending on how her next two years playing at the collegiate level work out.

According to Gibbs, her future at Pepperdine looks extremely bright on the course: “Each year she believes more in herself . . . . Marissa is someone that we will look to to be one of our top players.”

And off the course. “She’s very warm and loves to laugh and doesn’t take things too seriously,” added Gibbs. “She has a wonderful way of looking at life.”

Chow said that after missing out on studying abroad this summer, she hopes to apply again to go to Switzerland next year. But with all the success that keeps meeting her, traveling the world might have to wait for now.

“Marissa definitely has a game that can qualify and go back there and compete,” said Gibbs. “She has many U.S. Opens in her future.”