A Mother’s Take: A Buddhist Mother Finds Her Light

An example of this is the Buddhist community. As Aiden and I began to share our stories in the faith community, I didn’t know any Buddhist churches or temples that were visibly talking about the LGBTQ+ community.

So, the story I made up in my head was that they were not supportive of me and my family. Later on, I heard different perspectives.

One ally from a Buddhist temple said she was shocked that I did not think her temple was supportive. Nothing in their theology condemns LGBTQ+, so she thought there was nothing to talk about. It is a nonissue she explained. But to me, it wasn’t a nonissue. Their silence was a sign that we were not welcome.

I would like to feature one mother who is courageously bringing visibility and voice to this issue. When I talked with Janet Umezu, she expressed her reluctance to become an advocate initially, but slowly, she has stepped into the light and is sharing her story.

She has three children: one who identifies as lesbian, one transgender and a third is what  I call a straight ally. She and her family have had to navigate their path as visible leaders in the Buddhist community, since her husband, Bishop Kodo Umezu, is a leader of the Buddhist Churches of America, which oversees more than 60 temples around the United States. And so, their journey has been deciding how visible they could and would be.

Like Aiden, their middle child was assigned female at birth. And like Aiden, Norio first came out as lesbian, but later transitioned to be male. In many ways, when I talked with Janet, our journeys were similar, especially the guilt that we were not there for our children and the sinking feeling we did something so terribly wrong as mothers.

Also, in the beginning, we both questioned whether our children had been unduly influenced and were making a wrong choice. Of course, today, we know our children do not have a choice. We were the ones who had to choose. 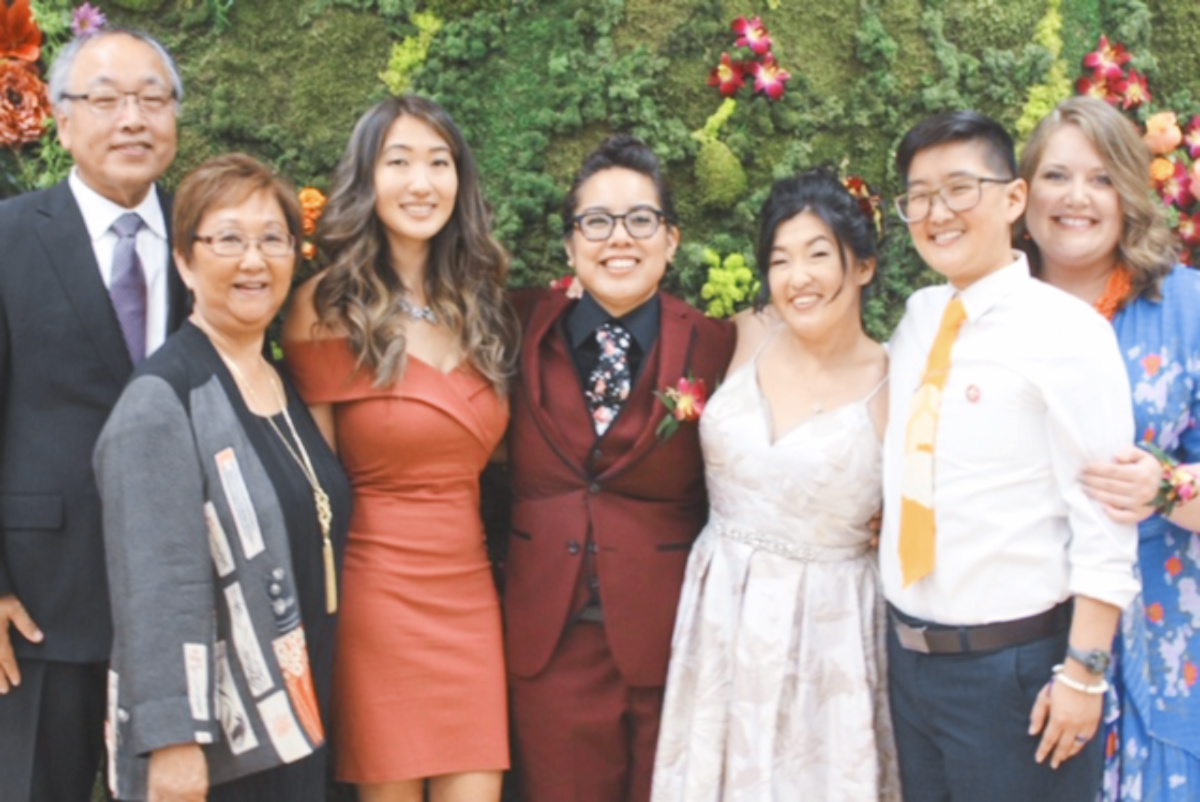 Where our stories diverge is that my husband and I were not highly visible members of a community, like the Umezu family. The bishop had taken his position as head of the Jodo Shinshu temples in the United States in 2012, and so their challenges were magnified.

Two years later in 2014, Norio, who at the time still identified as lesbian, married Liz. It was a challenging moment for the family. Janet questioned how would their family be perceived? How would this affect her husband’s position as a bishop?

Norio’s wedding propelled Janet down a road that she may not have been ready for, but felt she had to face. Cautiously, Janet began to talk to others. She started with her friends and family. Most responded that it was OK. Then she talked with an 80-year-old member of a sangha, and this elderly woman’s response was, “Is your child happy? That’s all that should count.” That conversation was one of the turning points in Janet’s thinking. If an 80 year old can accept my child, then why can’t I?

Other pivotal moments came when Janet heard the heartbreaking story of another transgender Buddhist individual. “Listening to her story, I did not want my children to feel like her,” she said. Ironically, she also saw a video that I made sharing my journey. Watching that made Janet feel like she was not alone, and she also realized that sharing her story might help others.

So, with trepidation, Janet went before a camera in 2018 and shared her story for Okaeri, a biennial gathering of LGBTQ+ Nikkeis. At that filming, she met two other Nikkei families … one with a young transgender daughter and a father and mother with two gay sons. The parents of the two gay sons were in town for the wedding of their oldest son to his partner. “It was so freeing talking to Janet Uradomo and Glenn and Karen Murakami,” Janet said.

The filming of her story changed Janet’s thoughts dramatically. “I was still in my shell until then. I didn’t think that what I had to say was worthy,” she said. Now that she has “come out,” there are others in the Buddhist community who have been telling her how important it was for them to see a Buddhist mother who has struggled and often still does, but is making her way and courageously sharing her journey for others to hear. She is helping others feel not so alone.

Janet admits that it was easier to accept her daughter being lesbian. Last year, Amy got married in a Buddhist church. My husband and I were honored to be invited to their wedding, and I was so moved by the images and love that filled the day, as well as the joy that was a part of so many moments. It is the kind of day every mother wishes for her child when they find their life partner.

Norio eventually transitioned to be Janet’s son shortly after his marriage in 2014. Accepting her transgender son has been a more difficult process. For a time, they were not close because Norio was living in Iowa, and the distance made it difficult to feel connected.

In the end, Janet said, “On this journey, there are ups and downs . . . some days I feel it is too much, then other days I have to remind myself that it’s OK. You’re watching your children grow up to be happy individuals and being their authentic self.”

Presently, exciting things are happening for their family. Norio and Liz are expecting their first child, and Janet is excited to be a grandmother for the first time. Persevering through all their discomfort has brought them closer together. In fact, Norio and Liz have now moved back to California to be closer to family.