Like many of you, Zoom has become a way to stay connected, not only at work, but also personally as well. I was on one such call when a special moment happened.

It was Seiko’s birthday, and we were all asked to share a special moment, a special wish or just how the birthday girl had touched our lives. We laughed at some thoughts and nodded in agreement of others.  Then, Seiko’s baby brother, Arnold, started to relay a moment when his big sister made a birthday cake and Kool-Aid popsicles to celebrate his 7th or 8th birthday.

He said that his parents worked really hard and they had very little money, so he was sad that his birthday would go unnoticed. But Seiko, who was 10 years older, told him, “I can bake you a cake!”

This could have been just another moment that one of us shared, but as Arnold spoke, his voice shook with emotion, and tears began to well up in his eyes. This memory was still in his heart even over 55 years later. 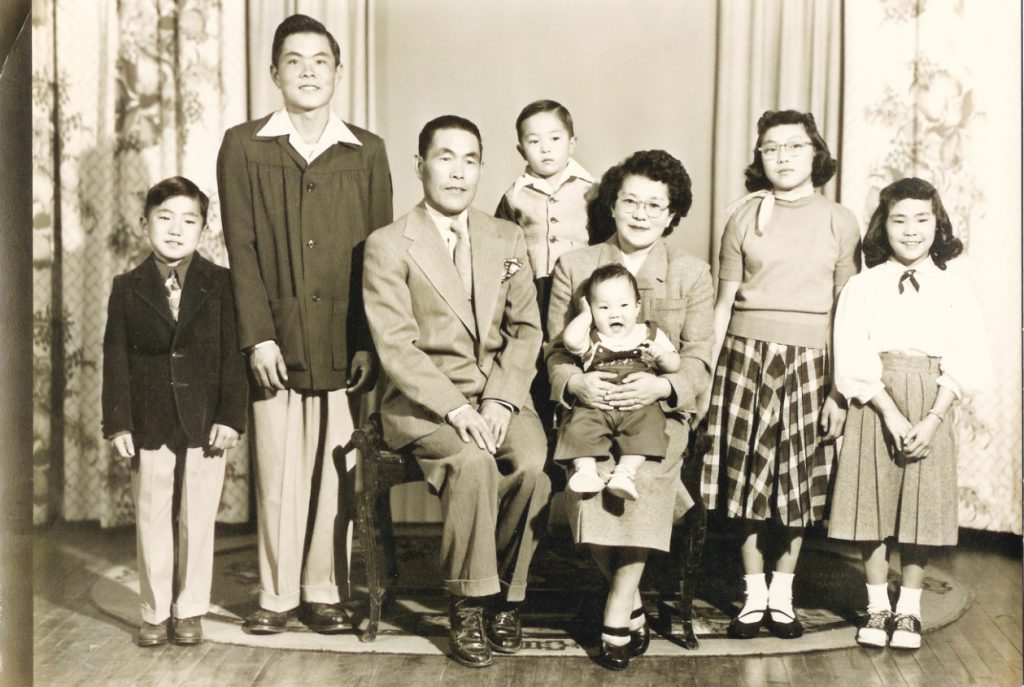 Arnold sits on his mother’s lap while Seiko is standing at far right. Their oldest brother was away in the Army and requested the family take this photo.

I was intrigued by this memory, so I asked if I could interview the two of them to understand more deeply this emotion that came out of his birthday sharing. Seiko and Arnold both agreed, and so we set a date to talk on Zoom again.

What started off to be a discussion about the birthday cake for Arnold and how Seiko’s gesture was “because I love my brother” ended up going in a different direction.

Seiko and Arnold began to talk about their life in Colorado, as a poor family of nine. Their mother especially struggled because she woke up early to make breakfast for the family, worked in the fields, returned home to make lunch, went back into the fields and then came back to make dinner. She also handled the books for the farm, so she was busy all the time and exhausted as a result.

Arnold said that his mother was often in a bad mood and would lash out at the children. And Arnold further explained, “The smallest things might set her off, but Seiko protected me and was my savior.” Even at the age of 10, Seiko was asked to watch her two younger brothers and baby, Arnold, because she was too young to work in the fields. She became a surrogate mother to her younger siblings.

One thing I noticed when I spoke with Arnold and Seiko was that they weren’t angry or bitter about the life they had growing up. Neither of them had an ounce of resentment in their voice. They seemed to see things from an empathetic and grateful perspective.

Arnold said, “When you don’t have much money, the little things count.” Seiko said more than one time, “Mom, worked so hard” with such compassion in her voice.

Both agreed that when they were young, they didn’t understand why their mom was always so unhappy and mad. But as they grew up, they understood what the pressures of having so little money, working from dawn to dusk in the fields, handling the bookkeeping and taking care of seven children did to their mother.

It was constant pressure, endless worry, and her list of things to do was never-ending.

And then I heard words that just broke my heart. They said their grandmother in Japan used to say to their mom, “You’re so ugly, why would any man want to marry you.”

That was so cruel, I told them maybe I should not write those thoughts, but they both said their mom used to tell everyone, and so it was common knowledge. On top of working so hard, their mom had to live with these words from her own mother.

When I asked Arnold what he would like to say to his mother, even though she is no longer with us for Mother’s Day, he shared these poetic words: “Like the Sakura or cherry blossoms, our earthly life is brief and fleeting … I am grateful that I was able to witness rare moments when you were joyous and in full bloom. I know you loved us deeply, as we do you, and you continue to live on within us and all our children.”

Seiko shared these thoughts as a tribute to her mother: “You had such a rough life and worked so hard in the field. I really didn’t appreciate all the hardships you endured until I got older.  The only regret I have is that I did not tell you how much I loved you and really acknowledged how much you meant to me. I love you, Mom.”

This article started off to be about a sister and brother who love each other so much and I wanted to understand that love. But in the end, it’s more than that. It’s about understanding, empathy, gratitude, forgiveness, as well as love. Both Arnold and Seiko have warm and caring spirits, so the attitude they have chosen toward their mother has made them the wonderful human beings they are today.

For all the mothers out in the world who have worked so hard for their families and loved the best that they knew how, I hope you had a wonderful Mother’s Day. And for my mother, Jean Nobuye Asamoto Ogino, your light continues to shine brightly in my life. Happy Heavenly Mother’s Day. I feel your spirit around me in all that I do.