More than 10 years ago, Aiden was asked to leave a local Lutheran church we were attending. In the kindest voice, a visiting minister told my child that he could return when he found himself … in other words, when he was not gay. Those words pierced my son’s heart.

Aiden loved God, but on that day, he believed that God no longer loved him. He left the church and has not returned.

I left the church as well, never feeling completely safe. I was afraid for Aiden, and I was not brave enough to stay and try to change the way this church viewed the LGBTQ community.

Today, I am stronger and more determined to transform the way the faith community sees LGBTQ individuals and their families. I believe the greatest hurt to this group has come from the faith community, and I feel the world will never be safe for Aiden if churches, temples and mosques condemn those in the LGBTQ community and call them abominations.

So, in May, we were able to bring more than 40 people from churches and temples to learn about LGBTQ individuals and dialogue on what could be done to provide greater pastoral care. We called it “Creating Safe Faith Communities.”

Clergy developed the program, which included input from Christian and Buddhist perspectives. The most impactful part of the program to me was hearing from Buddhist and Christian LGBTQ individuals and their families … stories of rejection, invisibility and suffering.

Tears flowed openly from the panelists, who emotionally shared their deep pain. And tears came in response from the clergy and faith leaders when they realized the hurt that had been brought to those attending churches and temples.

Before our eyes, we saw people being transformed by the tears and people being healed by the love that seemed to fill the room. It was one of the most moving three hours I have ever spent, and I believe hearts were changed that night. 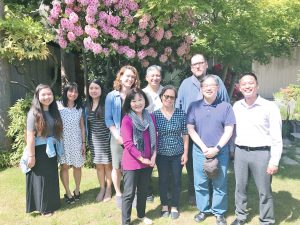 Recently, a member of Blaine had come out in front of the congregation as transgender, and so the church thought it would be helpful to raise awareness by having me share our family’s journey.

I met so many wonderful people who came up to me to share words of support and gratitude following my presentation. I also met many who said they enjoyed my column in the Pacific Citizen. I have always hoped that my reflections would touch the hearts of those who read “A Mother’s Take,” and in Seattle, I felt that my words did make a difference.

Finally, in June, Gardena Buddhist Temple presented “Ichi-Mi,” which means “being one in flavor.” The organizers had hoped to draw 30 people. To their surprise, 50 people came. The most startling moment was when we moved into a meeting room to listen to a LGBTQ panel. However, we were astounded to face an empty panel table.

We were told that a number of LGBTQ Buddhist individuals were asked to speak from Gardena Buddhist Temple and other temples — but all declined. There was an audible reaction from many in the room. They couldn’t believe that LGBTQ people were so afraid to speak. What could have been a very awkward moment turned into a robust discussion of why LGBTQ individuals fear sharing their story in public and how we as individual allies can show greater support.

Although I believe the faith community as a whole needs to be more accepting and loving toward the LGBTQ community, I am also heartened to see churches and temples doing work to be more inclusive.

And so this is what I ask: If your place of worship wants to learn more about the LGBTQ community and how to support them, please contact me (maizumi8888@gmail.com). I will do the best that I can to provide resources for you, or perhaps we may be able to create a panel event.

As a result of a Facebook post I made about no Buddhist LGBTQ individuals wanting to be on a panel, I have received numerous messages from people who would be willing to speak.

Let us help to create inclusive faith communities so that more individuals will feel safe, respected and loved. I want that for Aiden, and I want that for all those in the LGBTQ community.