Like so many of us, I unplugged from the television on election night, unable to hear another word about the votes being cast. It was disheartening to think that we might have another four years of a person who didn’t care about my son and so many other families and communities. But then each passing day brought more news seeming to signal a positive trajectory for the Biden/Harris ticket. Cautiously, I began to have hope again.

Since I am an educator, lessons have always been a part of my life. Whether faced with joy or sorrow, I believe that learning something for my future self could be gleaned from any experience, and so here are just a few lessons that touched me as I moved through the Biden/Harris campaign and election.

I learned from Stacey Abrams that even in the midst of defeat, perhaps there is a greater plan — I just have to look for it.

Stacey worked so hard in Georgia to fight the voter suppression that I believe caused her loss for governor in 2018. She registered 800,000 voters for 2020! She also took her knowledge and taught other states how to organize and get out the vote. Thank you, Stacey Abrams, for being a ray of hope and voice for Georgia and eventually to so many others, like me. We still have work to do … let’s take back the senate on Jan. 5, 2021.

I learned from now-President-Elect Joe Biden that age is just a number. By listening to his heart, he overcame two failed presidential attempts and multiples losses in the 2020 Democratic primary for president. Sometimes, timing is everything. 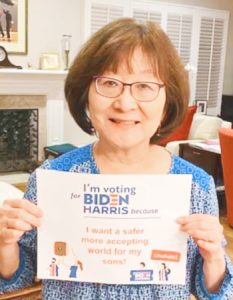 Biden/Harris creating a safer world for my sons (Photo: Courtesy of Marsha Aizumi)

In Biden, I saw that being there for your children, whether it be by their hospital bedside, tucking them in at night or saying on national television that I am proud of my son who has recovered from drugs, can give them the best chance to find success and know they will always have a place to belong. A father is not determined by biology, but by being there when your children need you.

President-Elect Biden also taught me that the ability to forgive might be one of the most courageous and unselfish things I can do. Even after Sen. Kamala Harris criticized him at one of the presidential debates, he still chose her to be his running mate because she would be the best person to lead the country with him. Wisdom comes in many forms.

I understand that leadership often means taking a stand, even if I don’t think it will make a difference. Rep. Jim Clyborn (D-S.C.) took a stand after a woman told him, “We need to hear from you,” and the Black voters were the turning point for Joe Biden’s campaign. One voice CAN make a difference.

I believe that coming from humble backgrounds, raised by a single parent, does not define who you are. Only YOU can define who you are. And what we see today is the first mixed-race, Black and Southeast Asian woman, vice president-elect of the United States. How many little girls are now dreaming bigger because of Harris?

Finally, I believe you can be scared and brave at the same time. Whenever I picked up the phone to make a call for Japanese Americans for Biden/Harris, I felt scared. And then when I hung up the phone, I felt brave. We can all be courageous in small ways.

On the day Joe Biden was declared the new leader of our country, I saw cities around the world gather to rejoice, a country toll bells, world leaders say, “Welcome back, America.” A political commentator named Van Jones expressed his relief through tears as he shared, “It’s easier being a parent this morning … easier to tell your kids character matters, telling the truth matters, being a good person matters.”

On the day Joe Biden was elected, I also received a message from my cousin who has children and grandchildren who are both Japanese and Black, a text from a mother who has lesbian and transgender children and a Facebook friend who messaged me that we were a beacon of light for the world.