There is a new book out by Glennon Doyle called “Untamed.” In the book, the author says, “The thing that breaks your heart is the very thing you were born to heal. Every world changer’s work begins with a broken heart.” I think this quote is so apropos to two people I interviewed for this month’s column.

Harold and Ellen Kameya are two trailblazers in the Nikkei LGBTQ+ community. Because of them, I am the activist I am today. Their daughter, Valerie, came out as a lesbian in 1988. I told them that was the year Aiden was born, so we have this very special connection.

In the 1980s, there were no visible Nikkei parents of LGBTQ+ children. Harold remembers:

“In February of 1988, I was on my computer and read what Valerie had written about a fearful visit to the L.A. Gay and Lesbian Center seeking help. I sat there so devastated that I wept. But it wasn’t until later that summer that I sat down to talk to Valerie and Ellen. I waited because Valerie was away at college, and I didn’t want to worry Ellen. Ellen’s first reaction when Valerie shared that she might be gay or bisexual was, ‘You can’t be gay! There are no gay people in the Japanese community.’ We both wanted her to have the best life possible. How was happiness going to be in Valerie’s future now? Our hearts were broken.” 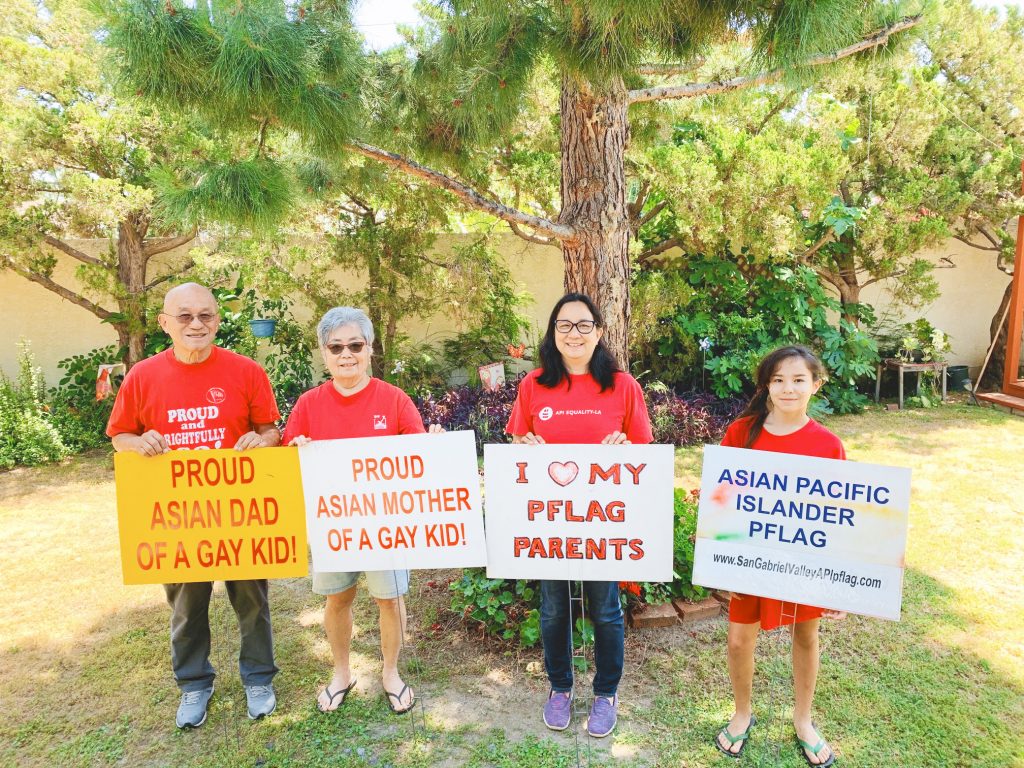 But Harold and Ellen’s love for Valerie started them on a journey that they did not anticipate. They felt that they would not be accepted at their church any longer, so they found a new church. They learned later that Valerie’s experience in the church hurt her the most. Their church was a foundational piece in their life for eight years, and now that was gone. … Another heartbreak.

Listening to Ellen choked me up when she said, “Harold must have really loved Valerie because he was willing to speak in public.”

Speaking in public is one of most people’s greatest fears, but for Harold, it was even harder. He was a severe stutterer. He had enrolled in Toastmasters and began attending a self-help stuttering group in 1988 for his job. Little did he know this step to be a better speaker would help him in his future activism, so he could stand up for Valerie and speak out in public about his love and support of her. Harold also shared “being a stutterer made me more empathetic toward LGBTQ+ individuals.”

In 1990, the Kameyas were asked to speak on a panel as parents of a lesbian daughter at an Asian AIDS conference. After they spoke, an Asian gay man came up to them with tears of gratitude streaming down his face. He vulnerably showed the extreme emotional pain that LGBTQ+ individuals were going through.

Harold and Ellen’s visibility and their voices were helping him heal because he knew that there were parents who loved their LGBTQ+ children. And this man made the Kameyas realize their stories could make a difference in the lives of the LGBTQ+ community. That is what has fueled the Kameyas’ activism for over 30 years and helped create the path that so many of us have been able to follow.

Harold talked about how Ellen and he became more visible in the Nikkei and LGBTQ+ Community:

“In 1997, we read articles about the Nakatani family of San Jose, who tragically lost all three of their sons, two through AIDS and one through an act of gun violence. Their book, ‘Honor Thy Children,’ described their family’s journey, and they were coming to Los Angeles on a book tour. We eagerly awaited their appearance, only to be asked to appear on a panel with the Nakatanis. The thought of being ‘out’ in public was uncomfortable. … However, we both felt it was time.

“It so happened that the panel with the Nakatanis coincided with our parents being in town for our sons’ graduations from college and law school. The panel also meant that we had to inform our parents about Valerie. When my (Harold’s) parents first arrived from Hawaii, I gave them a quick ‘Homosexuality 101’ talk and invited them to attend the panel. My mother was initially unsure, but after additional sessions on human sexuality, she decided to attend. My mother’s main reaction from the panel was simply her immense relief and pleasure that her son was now able to speak in public.

“Coming out to our parents was a freeing experience. We no longer were hesitant to march in the huge Los Angeles Gay Pride Parade!

During our 20-plus years of marching in pride parades, we experimented with various messages on the signs that we carried.

“One year, Ellen held a sign that read ‘PROUD ASIAN MOM OF A GAY KID.’ Because of the debilitating effect of Asian shame that we felt when Valerie first came out, the words proud and Asian were important words for Ellen to proclaim. The reaction that Ellen received could only be described as ‘electric.’ Many young women ran up to her with tears in their eyes, hugging and thanking her for her message. Others came up to pose for photos alongside her.

As we walked by, loud cheers were a common reaction from people lining the street. The following year, I carried a matching sign and received similar reactions from the crowd.”

Harold and Ellen reflect that “the greatest reward on this journey has been the respect of our three children.”

In 2018, at PFLAG San Gabriel Valley’s five-year anniversary celebration, PFLAG SGV surprised Harold and Ellen with an award for all their years of unselfish service. In the audience, their whole family and so many friends sat proudly witnessing them being honored.

What touched me the most was how their children and grandchildren were watching their parents and grandparents being recognized for not only their years of standing up for what they believed in, but also their courage to be a visible light of hope to Asian and LGBTQ+ individuals. What role models Harold and Ellen have been to their family, friends and our community.

In the end, as I listened to the stories of Harold and Ellen Kameya, all I could think about was how they have helped to heal the world with their courage at a time when no one else was speaking up, how experiences in their lives have brought them to a place of greater compassion and empathy, but most of all of how they have shown that unwavering love can heal heartbreak and not only change their lives, but ours as well. …

“We all want purpose and connection, Tell me what breaks Your heart and I’ll point you toward both.”