A Mother’s Take: Looking Back with Gratitude, Looking Forward with Hope

As I sit down to my computer, ready to write my hopes and dreams for 2014, I want to take a few moments to share some of the highlights of 2013 that have stayed in my heart. Last year was one of my most memorable years in my life and here is why:

In early 2013, I met some wonderful JACL members and community leaders in Seattle. I connected them to PFLAG Bellevue/Seattle, a local chapter of a national organization that supports, educates and advocates for lesbian, gay, bisexual and transgender individuals and their families. A few months later, the two organizations marched together in the Seattle LGBT Pride parade, showing their support of Asian Pacific Islander LGBT families in Seattle. 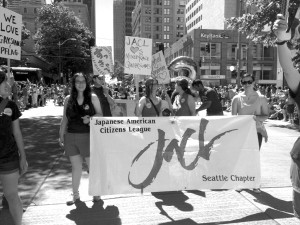 Then, in May, the first API chapter in the 40-year history of PFLAG was approved. Quite a milestone! PFLAG has over 350 chapters and 200,000 members worldwide. The San Gabriel Valley API LGBT community now has a place for support and a place to share their stories.

During the summer of 2013, a dedicated group of leaders had their first meeting to discuss having an LGBT conference in Los Angeles, starting with the Nikkei community and in the future expanding to all API LGBT families. Once again, JACL and PFLAG are working together, in addition to a number of local LGBT, API and social justice organizations. Look for more details in the future.

In September, I had the honor of going over to China to speak to Chinese LGBT individuals and their parents. I will always remember the strength in their hearts, the hope that rang out through their words and the dreams of equality for their children they worked fearlessly on.Finally and most memorably in November, my son, Aiden took his longtime partner, Mary, as his wife. He vowed to love what he knows of her and trust what he is yet to learn. Watching my son find the person he wants to spend the rest of his life with was an unforgettable day. To our family, this wedding also symbolized never giving up hope, never losing our belief in love and most importantly, we never stopped believing in each other. Tears flowed freely during the ceremony. No words can describe the pride, gratitude and joy I felt that day. My son could live in truth and still find love.

But as exciting as 2013 was, 2014 shows all indications of holding even more possibilities. Seattle JACL continues to look for ways to send the message of love and acceptance to the API LGBT families in their area. We will be meeting once again in 2014 to formulate more plans.

Work is being done all around the country to bring greater awareness and understanding to API LGBT families and individuals, including API parents doing public service announcements, and organizations translating LGBT documents into multiple Asian languages. The Rainbow Mothers from China are waiting to see firsthand the work we are doing in Los Angeles and New York City for the API LGBT community. We hope to see their courageous faces in the U.S. very soon.

The momentum for marriage equality continues to gather speed. Who would have thought a few years ago that so many states would stand on the side of love?

The Nikkei LGBT conference in Los Angeles will be held in late 2014 or early 2015. We have secured two generous donations — one monetary and one for donated space — to begin our planning. Thank you to Linda Aratani and the Japanese American National Museum.

And who knows what new dreams will be coming true for Aiden and Mary. All I know for sure is this: If you have a strong passion and unwavering belief, anything is possible.

And so that is my wish for all of you in 2014. May you find a passion that is unstoppable and a belief that fills your soul, so at the end of the year, you can look back and say: This has been my greatest year!