A Mother’s Take: Sakaye Aratani — A Shining Light of Love

Many of us that are doing work to bring greater visibility and voice to issues have people who quietly give in ways that empower and encourage us to keep moving forward, even when faced with adversity. They are the “wind beneath our wings.”

They just give from their heart and because it is the right thing to do. My husband is one of these people in my life, and I would like to highlight another special lady to me: Sakaye Aratani.

Both personally and through her foundation, Sakaye and her wonderful daughter, Linda, have provided financial and name support to “Okaeri: A Nikkei LGBTQ Community.” Linda Aratani said that when she first approached her mom about helping Okaeri, without hesitation, Sakaye said, “This is an important issue that we need to support.”

For those of you not familiar with Okaeri, we have mainly organized a large conference every two years but are now pivoting to more virtual programming due to COVID-19. In September, we are starting an Intergenerational Support Group for LGBTQ individuals, their parents and allies. And we hope to have another conference in 2021 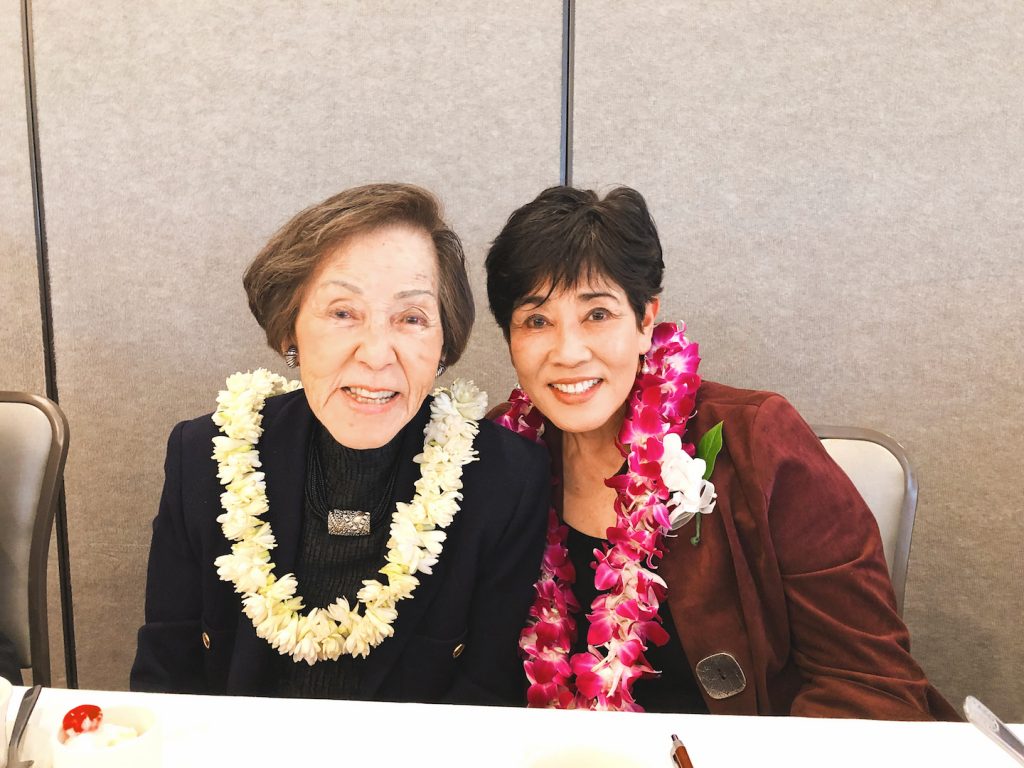 We all know that Sakaye’s husband, George Aratani, was a hard-working businessman and philanthropist who wanted to provide for his family and the Japanese American community — he loved both so deeply. But most people might not know a lot about Sakaye Aratani.

Sakaye grew up in Hollywood, Gardena and Los Angeles. She was a pitcher on a baseball team but said she didn’t have a lot of hobbies outside of her interest in sports and poultry. She was so interested in poultry, she went to live with a Japanese family for one year to learn all about raising chickens and selling eggs.

“Later on my father started his own farm, and we sold eggs, too. We had about 1,500 chickens,” Sakaye explained. “When [World War II] broke out, my uncle wanted us to move to Reedley, which was near Fresno because he thought it would be safer than to live in the Los Angeles area. I had to sell 1,500 chickens to other farms, and eventually, I gave away about 50 percent of them, since we were moving to Reedley. But I found every chicken a new home.”

Sakaye was 19 or 20 years of age, yet even at that young age, she had the determination and laser focus to accomplish this goal. Although Sakaye’s family moved to Reedley, they could not escape the evacuation order. They were interned at Poston Camp in Arizona.

Sakaye met her future husband when the flower shop owner she worked for asked Sakaye to drive her to Little Tokyo. It was there where she first met George. When I asked her, “Was it love at first sight?” Sakaye laughed and immediately said, “Yes, I thought he was cute.”

Listening to Sakaye talk about her past made me feel that it was natural that she and George should fall in love. George’s father was a beloved and respected businessman who taught his son well. And then there was Sakaye, who learned about business at an early age.

Linda shared that her father’s dream when he started Mikasa was “to make a lot of money so he could give it away to the JA community. He knew that our community would need help to do the work that needed to be done.” The Aratani Foundation currently gives away grants to support around 50 Japanese American organizations.

I have always been so curious about where Sakaye’s attitude came from regarding the LGBTQ community. She explained that her grandfather was a very positive, loving and open-minded man, and so he passed this on to his granddaughter.

Linda observed, “There must have been a trickle-down effect that influenced my mom.” And those qualities are also so apparent in Linda. Being open and giving was just part of who they were and are today. Sakaye also said that George was equally as giving, especially when it came to the JA community and others who needed help.

Sakaye remembers traveling to Japan and making friends with those from the gay community. She said there were so many gay bars in Japan. I asked, “Did you ever go to any gay bars?” Instantly, she perked up and said, “Oh, yes!!” There was not a hint of judgment or discomfort in her voice. You could tell those were good memories.

I learn so much when I interview guests for my column. From Sakaye, I learned the importance of teaching our children what is right, just and kind because those lessons get handed down to generations that follow.

I learned that having a positive attitude can add years to your life. At 100 years of age, she radiates so much love and happiness. When I asked her how she was doing during COVID-19, she didn’t lament about how hard life is right now, but said to me, “No problem!”

Finally, I learned that bringing your voice to any community can change the trajectory of any movement. The Aratanis have made such a difference in the Nikkei LGBTQ community.

Sakaye’s final words to me were, “We should all be open minded and helpful to other people and our community.”

This is the legacy the Aratani family and their foundation have brought to our Nikkei community. They are a shining light of love to all who meet them and for many of us that can call them our friends.