A Mother’s Take: Seeing the Good

As much as LGBTQ+ individuals and their families can be a visible voice for the LGBTQ+ community, I believe that allies who are not LGBTQ+ have the most powerful voices. The following experience to me is a perfect example of one voice that has made a difference in her community.

I have a friend who lives in a small community in Arkansas. She is 76 years of age, and we have been friends for over 40 years. Recently, she shared that a local 84-year-old chaplain wrote a negative article about being transgender, and “I was upset  …   so, I ordered another copy of your book and mailed it to him.”

My friend, who I will call “Penny,” told me she scanned the local newspaper weekly hoping to see some type of response from the chaplain, but nothing appeared. Perhaps he tossed the book in the corner or threw it in the trash in disgust. She didn’t know, but each week, she opened the newspaper, hoping that her action would make a difference.

And then after two months, Chaplain Box finally wrote an article about receiving this anonymous book. Here is what he said:

“After writing my last article, someone whose identity is unknown sent me a copy of Marsha and Aiden Aizumi’s book, ‘Two Spirits, One Heart.’  … I was so impressed that someone would make such an effort to help me better understand the issues of a transgender person instead of just condemning my efforts to deal with the subject that I immediately read the book in the next six hours.” 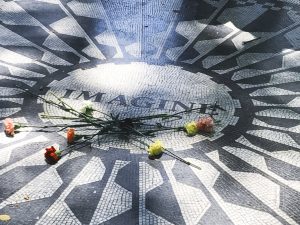 Chaplain Box continues by saying, “Loving parents who have a child who is struggling with his/her sexuality do not need the support of people who want to condemn their child or send him/her to hell; they need the help of people who are willing to walk with them through the valleys of life. … My generation may be too old to comprehend the complexities of life today, but we are not too old to love our children. … ”

Through this incident, I realized how I often stereotype people and situations. I know Penny and her husband are supportive of Aiden and me, but on some level, I don’t feel that way about all people in Arkansas or the South.

Also, I know that there are churches and temples that are supportive of the LGBTQ+ individuals and their families, but my immediate reaction when someone says they go to church regularly or are religious is to put up my guard.

In a world and country that is so polarized, I am also reminded that I have a responsibility to NOT contribute to this division but do whatever I can to bring greater humanity into what I write, speak and do.

That is not always easy for me when I see inequality, hatred and violence in every news cycle.  But like Penny, I need to have faith and see the best in people. I need to believe that most people are basically good human beings who might have a different perspective than I do. That in every state that may vote red, there are people who are supportive of the LGBTQ community. That in every church that is not open, affirming or reconciling, there are people who want to be inclusive, warm and welcoming.

Recently, I also received a negative post on my Facebook page. I immediately deleted it. It condemned me as a parent. The person criticized me for allowing Aiden to transition, saying that I did not want him to be a lesbian.

And yet, I realize that I could also judge others whose families I do not know. Rather than delete her post, I wish I responded in a caring way and perhaps educated her. If she was open, maybe we would have learned something from each other. If she continued to be toxic, then I could have stopped our interaction.

So, in the future, I hope to hear other points of view. By listening to them, maybe, just maybe they will listen to me, and we will have contributed to people coming together and not judging each other.

I am growing and changing. And as I am becoming more compassionate and loving, I am reminded that faith is important, and acceptance of others and their journeys is also part of my growth and learning.

I want to contribute to a kinder and gentler society, country and world.

Thank you Chaplain Robert and Penny for helping me see the light … .

EPILOGUE: I received Chaplain Robert’s address and sent him a note. He emailed me, and we are now corresponding. I have a new friend in Arkansas!!