A Mother’s Take: The Power of Storytelling

The week of the JACL National Convention really reinforced to me the incredible power of storytelling. Listening to the stories in favor of Resolution 3, asking for JACL to apologize to those imprisoned in Tule Lake, really opened my eyes to the negative impact and intergenerational trauma of being in Tule Lake, perceived as disloyal or called “No-No Boys.”

And yet, those on the opposing side told emotional stories of fighting for their country and now feeling not respected and valued.  So many stories just tore at my heart.

What I was equally moved by were the  people who dedicated hours, late into the night, trying to bring the two sides together, so that if Resolution 3 was passed, both sides would have felt seen, heard and respected.

I hope that goal was accomplished, but I had a sense there might still be some hurt feelings, which over time can possibly be healed.

After an emotional morning of hearing  stories from camp, it was off to my  workshop called “Intersecting Identities:  Nikkei LGBTQ Stories.” 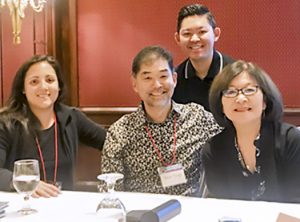 I was so honored to be on a panel with Stan Yogi and Sarah Baker. Introduced by our moderator, Michael Iwasaki from Salt Lake City JACL, Sarah, Bill and I shared our stories of feeling invisible and not whole, but finding a place at “Okaeri: A Nikkei LGBTQ Gathering” in Los Angeles and realizing how empowering it is to be seen at the intersection of being Japanese American, mixed-race JA or gay, queer, transgender or, for me, as a mother and an activist.

When people see all of you and love you anyway, the feeling is overwhelmingly affirming. Having JACL provide a workshop on LGBTQ identities within the Nikkei community made me feel that here was another safe space that was being created. Thank you so much, David Inoue!

While in Salt Lake City, I also had an opportunity to meet with a Mormon podcaster, Richard Ostler, whose podcast “Listen, Learn, Love” opened up my heart to the LDS (Latter Day Saints) community.

I took a Lyft to his home 20 minutes from SLC, and then we dialed up Aiden, who was just getting off work in California. It was 90 minutes of storytelling with much laughter and a few tears … from me, of course.

I walked away with a whole different perspective of the Mormon community. Richard, a devout Mormon, is bringing our LGBTQ stories to over 7,000 listeners. As I left his home, this plaque that was hanging in Richard’s home seemed to remind me of who I need to be as I do this work

Go! Oh Go!
Go out to see the world!
And wherever you go … be brave
To whomever you meet … be kind
With whatever you have … be good

I am now a regular listener of “Listen, Learn, Love,” and because of my time with Richard and the JACL National Convention, I will continue to strive to be brave, kind and do good.

Thank you to all the people who shared their stories so that I could leave Salt Lake City a more enlightened, empowered and loving human being.