A Mother’s Take: Your Visibility and Voice Matters

I am reminded of the importance of having our Asian faces, names and thoughts out in the world because of two events I recently participated in. In October, Aiden and I attended the PFLAG National Conference, where we led a workshop called “Collaborations With Local and National Partners.” Aiden and I shared how we leveraged our time and resources by partnering with other LGBTQ+ and social justice organizations. JACL was one of our examples!

As we set up our session, a Japanese mother and her son walked in. The typical participants in this workshop were leaders of PFLAG chapters, so I was pleased that Asian leaders wanted to learn about this subject.

I also considered that they came to the wrong workshop because we had a few people stand up and say, “Oops,” because they were in the wrong room after they saw our workshop name displayed on the PowerPoint screen. But this mother and son sat down and settled in, so I knew they were there to stay.

Following the workshop, I made a point to connect with them. I found out that they specifically came to our session, not because of the subject, but because they saw our names and faces in the program booklet. 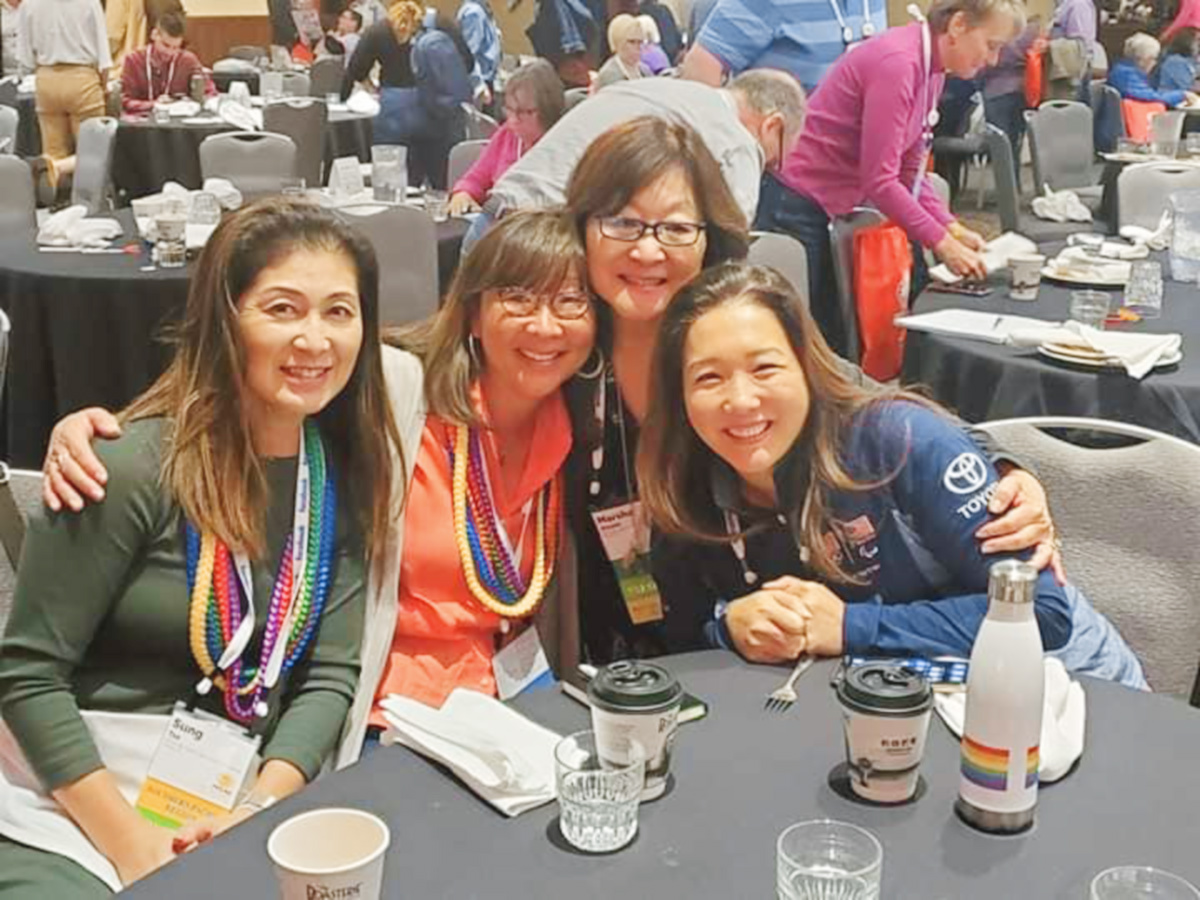 The son was transgender like Aiden, and the mother I could feel just wanted to find another mother who looked like her. The beautiful part of this encounter was learning that they had already mentally marked their calendar to attend “Okaeri 2020: A Nikkei LGBTQ Gathering,” since this was an example of work Aiden and I are doing. They would be coming to Los Angeles all the way from New Orleans. Visibility matters.

Also at the conference, I discovered visibility is not always enough. A chapter from Vancouver, Canada, informed me that they have a 30 percent population of Asian families in their city. However, they lack resources and support in native Asian languages for these families because their chapter members are mainly Caucasian.

It took another individual who came to the workshop that Aiden and I led the day before, who then tracked us down and then connected us with this Vancouver leader. Now, a Chinese-speaking PFLAG mom from Southern California is going to help Vancouver with support and resources. Sometimes, we need others to help us be more visible and connect us to others.

One week later, I was participating in a program that I helped organize called “Walking in Love.” It was a daylong symposium centered around finding ways to be more welcoming and inclusive of LGBTQ+ individuals and their families in the Christian churches.

We had a number of denominations present … Methodist, Universalist Unitarians, United Church of Christ, Latter Day Saints and even Catholic and Jewish individuals attended. As we were doing outreach for the program, the faith leader from the LDS church felt it might be best to have other denominations speak in his place, since he was not able to enroll very many LDS members to attend. But a number of us felt that Emerson Fersch’s story about his work would be inspirational, regardless of who was there.

We could not have anticipated the reaction we received from Emerson’s story. I heard positive comments of surprise that someone from the Mormon community was doing this work. In the audience, two gay men stood up and shared that they attended a Mormon church in the past but moved away from the LDS faith and were now attending other churches. You could tell it was healing for them to hear the work of this LDS leader. Our voices and stories matter, even if the communities we are representing are not present.

And so, these experiences continue to drive home the message that speaking out and being visible is important. Are you folding cranes for the Tsuru for Solidarity project? Are you bringing in speakers to educate your organizations or faith institutions on issues regarding LGBTQ, immigration, census or registering to vote? And are you educating yourself on some of the issues that touch your heart, so you can be a better advocate?

Whatever you are doing, I thank you for your visibility, your voice, your time and your presence. You truly matter to me and so many others.

“The planet does not need more successful people. The planet desperately needs more peacemakers, healers, restorers, storytellers and lovers of all kinds.”