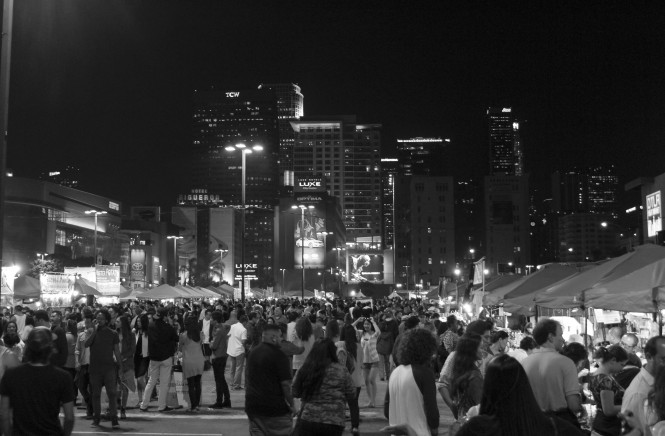 Folks at the 626 Night Market continued their culinary domination in downtown Los Angeles at the Staples Center last week June 20-21. The San Gabriel Valley locals visited downtown for the first time in Lot 7 outside the Staples Center, featuring new foods, artists and performers.

“The skyline played a big role in the event in setting the ambiance, energy and the vibe,” founder Jonny Hwang explains. “Like all of our events we try to incorporate as many local vendors as we can, bringing in a lot of local merchandise, food, performers, artists from downtown.”

The weekend included an Art Battle with contestants Chris Ouk, Darren Inouye, Eddy Lee, Geoff Pascual, Gmonik and Keenan Chapman. Attendees were allowed to vote on their favorite live art demonstrations from each artist while listening to the DJ Dance Floor.

In the latest foodie trend, seafood poke made a splash at the DTLA Night Market. Mama Musubi and chef Jay Terauchi whipped up together a secret menu featuring a wasabi poke. The petite serving packs a punch with sweet onions, sesame seeds and green onions with rice taco-style with a lettuce leaf. This vendor and chef team also served up currywurst rice balls with smoky Berkshire pork sausages and a tangy Japanese curry aioli, adding in that extra twist.

A few tents down from Mama Musubi was Sticky Rice Burger. As the name implies, the Stick Rice Burger is built between two stick rice buns, perfectly shaped and perfectly sticky, sandwiching together a house sauce, cabbage and a generous gooey beef patty.

This time around the 626 Night Market spiced things up with less Asian inspired vendors and opening its doors to other international foods. Unfortunately, the ever-smelly stinky tofu tents did not attend the weekend’s festivities but flavors from India, Mexico, the Middle East, Indonesia and Europe arrived.

From our neighbors up north the famous Japadog from Vancouver, Canada made a splash with their Japanese fashion hot dog truck. Attendees had a chance to take bite into yakisoba noodle fillings, bonito flaks, radish, kimchi, seaweed, Japanese mayonnaise and teriyaki. This remixed classic pleased crowds, bringing a fresh kick to the Night Market.

Not to say that hungry eaters didn’t have a chance to eat fusion foods as the intersection between ramen and everything else was bustling this weekend. Delicious hybrids included platters from Umaya Ramen’s ramen pizza and Keizo Shimamoto’s Sriracha Ramen Burger.

On the classic side the historic Formosa Café from West Hollywood offered up delicious drinks and dishes. The restaurants movie history includes Frank Sinatra’s late night dinner runs and Clark Gable visits along with James Dean and Elizabeth Taylor.

For a different taste palette, attendees had a chance to try boba and hookah in an odd but exciting marriage by Boba Bear. The hookah garden gave patrons a chance to sip on boba and puff on one of their 20 tobacco flavors.

Be on the look for more exciting and odd fusions at the next 626 Night Market July 18-19 at the Santa Anita Park, Arcadia. For more information visit their website at www.626NightMarket.com. The market may return back to the OC after a great turn out back in May. Though no official releases have been made at this time, Hwang and his team are looking to return in October.