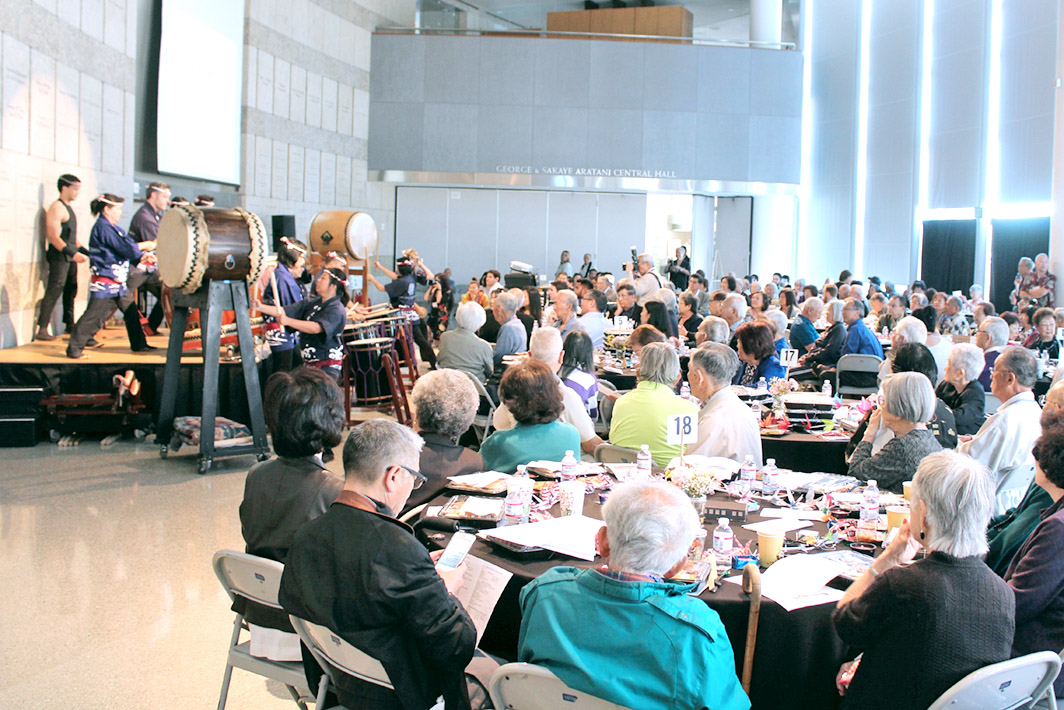 More than 200 attendees gathered at the Japanese American National Museum to recognize and recall their time at the Santa Anita Assembly Center on the 75th anniversary of the incarceration experience. (Photo: Charles James)

The Japanese American National Museum in Los Angeles welcomed more than 200 Japanese Americans and their guests on April 15 to acknowledge the 75th anniversary and remembrance of the Santa Anita Assembly Center and recognize the 75th anniversary of President Franklin D. Roosevelt’s signing of Executive Order 9066, which resulted in more than 19,000 Japanese Americans being evicted from their homes and incarcerated on the grounds of the Santa Anita Race Track between April 1942-Oct. 27, 1942, following the outbreak of World War II.

These gatherings and reunions are very much family affairs. And while they are occasions of solemn remembrance, they are also joyous meetings between old, dear friends as well. There is laughter and tears of joy as fellow incarcerees see each other for one more time. Over the years, many friendships and close bonds have been formed between them. They share an easy comradery that comes from being among others that shared a common injustice and suffered the hardships of being sent to the concentration camps.

Often, they have very fond memories of their stay in the camps.

Among those attending the Santa Anita Remembrance were a dozen descendants of Rafu Shimpo editor and journalist Shiro Fujioka, his wife, Chiyo, and their nine children.

Camp records show that Hiro Fujioka and his family arrived at the Santa Anita Assembly Center on April 29, 1942. Hiro and Chiyo were later sent to Heart Mountain in Wyoming with their nine children, arriving there on Sept. 4, 1942.

Jack Yoshisuki Kunitomi, who is 100 years old, attended the event. He was incarcerated at Heart Mountain with his wife and later was drafted to serve as an interpreter with the Military Intelligence Service during the war and then later in the post-war occupation of Japan. His oldest son, Dale, who born in the Heart Mountain concentration camp, along with his brother, Darrell, and sisters Colleen Miyano and Kerry Cababa also joined their father at the event.

Best known for thoroughbred horse racing, the Santa Anita Race Track in Arcadia, Calif., hosts some of the most prominent racing events in the United States. Not surprisingly and largely unknown to most Americans and racing aficionados, it also served as an assembly area for seven months after President Roosevelt issued Executive Order 9066 on Feb. 19, 1942.

Santa Anita’s parking lot was filled with row after row of 500 tar paper-covered barracks. Some internees were housed in the 64 converted horse stalls. The camp was divided into seven districts, which held several mess halls, a hospital, stores, a post office, classrooms, recreation buildings, laundry, showers and latrines. Bachelors were housed in the grandstand building.

The camp had its own newspaper, the Pacemaker, and church services were held in the track’s grandstand.

Executive Order 9066 (the original is on temporary display at the museum until May 21) authorized military commanders to exclude “any or all persons” from certain areas in the name of national defense. It cleared the way for the internment of Japanese Americans, German Americans and Italian Americans to concentration camps across the United States. Eventually, more than 120,000 people of Japanese ancestry — most were Japanese American citizens — to concentration camps in isolated parts of the country.

There were 17 temporary “Assembly Centers” designated to house the evicted population until construction on the more permanent and isolated concentration camps was finished. Most, like Santa Anita, were converted from race tracks or fairgrounds.

The JANM hall in which the remembrance was held was a fitting place to hold this year’s event. The museum sits on the site of one of the pickup points where Japanese Americans were ordered to report to be bused to the concentration camps.

The Saturday program was a busy one. The Bombu Taiko Group from Higashi Honganji Buddhist Church performed on drums to kick off the event. The group was followed by the Rev. Dr. Alfred Tsuyuki of the Konko Kyo Church, who then led an opening prayer to celebrate the 75th Remembrance.

A traditional bento lunch was served, and a video greeting from actor-activist George Takei was shown.

Entertainment included a very poised Veronica Toyomi Ota, the 2015 Nisei Week Princess, who sang the much-loved song during WWII “I’ll Be Seeing You.” It became an anthem for those serving overseas for both British and American soldiers.

The Hon. Akira Chiba, Consul General of Japan in Los Angeles, was met with much applause. He told event attendees that his goal is to visit all the former camps and honor as many of the former camp internees as possible during his tenure.

Ann Burroughs, newly named president and CEO of the Japanese American National Museum, delivered the keynote address. She praised all those detained for their resilience.

The gathering was also treated to a moving musical performance given by Darrell Kunitomi and Scott Nagatani of the Grateful Crane Ensemble. Photos were shown of many former incarcerees and scenes from the camps.

Toward the end of the official program, veterans of World War II were honored, as were veterans of all of America’s wars since WWII.

Notably and with great enthusiasm from the audience, Bacon Sakatani was honored for his tireless efforts over the years on behalf of the Santa Anita Assembly Center Committee and Heart Mountain. Stories of his work bringing together former incarcerees are legendary among those familiar with his work.

The program ended with a sentimental journey as everyone joined together to sing “Don’t Fence Me In,” “Shina No Yoru” (China Nights) and the famous Japanese American Infantry Unit fight song “The Four-Forty-Second.” The 442nd Regiment was the most-decorated unit for its size and length of service in the history of American warfare.

Most survivors attending Saturday’s event at the museum were only children during World War II, and many have little or no memory of their time there. The question increasingly being asked is: Will current and future generations continue to keep the memory of the camps and the lessons learned alive?