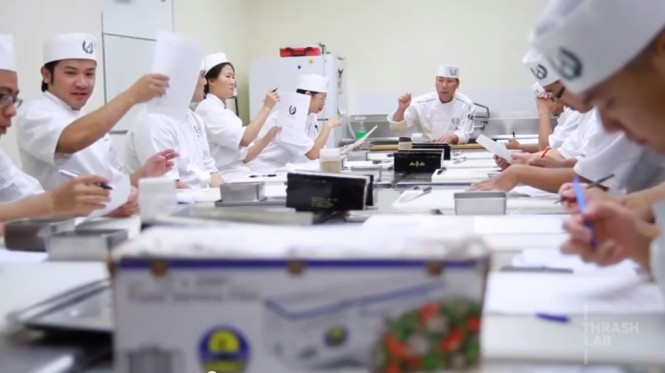 A new California law mandating restaurant workers and bartenders to wear gloves has left many sushi chefs feeling that they have lost their ‘connection’ to their culinary works of art.

Taste. Smell. Touch. These are all important senses for chefs, particularly those who have mastered the fine art of making sushi. However, a new law in California has made it mandatory for restaurant workers to wear gloves. The law was first passed on Jan. 1 and impacts everyone who touches food in any way, including bartenders and sushi chefs.

Those in the food industry have rallied together to repeal the law. At the end of March, the state’s Assembly Health Committee voted unanimously to reword sections of the law that made disposable gloves mandatory. This is the first step in the repeal process and, in the next step, AB 1252 would move to the floor of the state assembly for a vote. 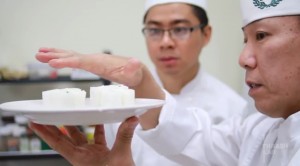 Chef Andy Matsuda of the Sushi Chef Institute with a student doing a demonstration.

Chef Andy Matsuda is just one of the sushi chefs who has been vocal about AB 1252; he has spoken to a number of media outlets regarding petitions to repeal the law. Matsuda has extensive experience, having worked in sushi bars in Aspen, Colo.; New York City and Santa Monica, Calif. In 2002, he opened the Sushi Chef Institute, a sushi training school for beginners and professional chefs that is currently based out of Torrance, Calif. He shares his knowledge of sushi with people of all backgrounds and has provided insight on how the California glove law will impact sushi chefs in particular.

For Matsuda, there are both positive and negative effects of the law. 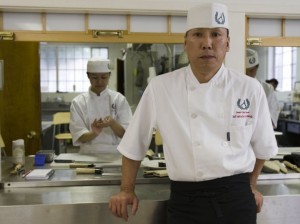 The potential negatives of glove use include higher risks of not having a firm grip on the knife, making it an unsafe cooking situation. Other potential negatives include bacterial growth within the glove, the possibility of accidentally cutting and serving part of the glove, loss of appetite from customers at sushi bars and the continuous use of the same glove despite the need to change out gloves.

“So many people come to us to talk about the law,” Matsuda said. “A lot of people are calling us and asking for updates.”

Matsuda notes the history of sushi, in particular how it’s a culinary art that has been done for hundreds of years in the same fashion, repudiating the argument that the use of gloves will bolster food safety. He also points out how sushi chefs wash their hands frequently and use kitchen towels kept in sanitizing water to kill bacteria.

Morihiro Onodera, chef of Mori Sushi from 2000-11, also waxes on the health aspects of the California glove law.

“I understand how the health department decided to use gloves because it’s safe and a health issue,” said Onodera, whose restaurant served handmade ingredients and locally harvested rice. “But not a lot of people are using gloves right now, (and) I go to sushi restaurants all the time.” (Since the law took effect Jan. 1, restaurants have at least six months to comply with the new mandate.) 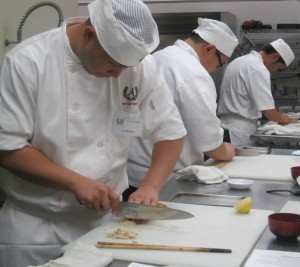 A class during session at the Sushi Chef Institute.

For Onodera, who was trained as a sushi chef in Tokyo and has worked at renowned dining establishments such as Los Angeles restaurants Katsu, Matsuhisa, R-23 and Takao, the California glove law impacts the process of putting together the pieces of sushi.

“This is not very comfortable because it’s such a delicate job making rice and cutting the fish, and (wearing a) glove is not really feeling the small details,” Onodera said.

Jay Terauchi, a food marketing consultant, heard about the law early on. A number of Terauchi’s clients are sushi chefs themselves, and he understands their disdain and suspicion of the law.

“For some of the older, traditional chefs, they do a lot of things by touch, by feel, to make a piece of sushi. It’s not about squeezing the rice together to form it, it’s all about the light touch. For them, it’s like trying to type with ski gloves on. Yeah, you can do it, you can type with very heavy, thick gloves on, but are you going to be as accurate? Are you going to be as fast? Just losing that sense of touch, maybe for them it might be relearning — it’s all about the touch, it’s all about the feel, it’s all about the right amount of pressure to form a rice ball like that,” Terauchi said. “Because I had done more production stuff where I have worked with gloves, I’m not as fast, the sushi didn’t come out really uniformly because of it being different, having to wear gloves to do something that you have done with clean hands before.”

Terauchi intricately knows the food industry, having taught sushi classes in the past and worked as a chef in restaurants. As a food marketing consultant, he helps a number of businesses on their social media marketing and communications strategies. 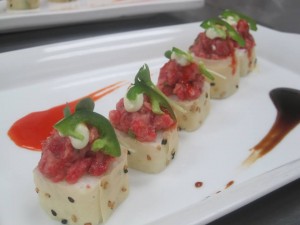 “I’ve heard a lot of, ‘It’s added bureaucracy’ or, ‘Do they really understand what we’re doing at this level?’ I can also understand the flipside. There are a lot of places that, for sanitary reasons or unsanitary reasons, I understand. But I think, for the most part, I’ve been in a lot of kitchens, I’ve been to a lot of restaurants, and I would say, for the most part, I don’t see a lot of health code violations,” Terauchi said. “I’m not a health code inspector, I don’t pretend to be or even acknowledge the fact that I’m an expert. But on the other hand, common sense type of stuff, I don’t see a lot of places where I think, ‘I would never eat here.’ I think there are other things we should worry about in the food industry versus does everybody have on gloves. I think that creates a false sense of food safety.”

Terauchi also brings up the environmental impact that the law could have.

“My first thoughts were thinking about how California is usually one of the leaders — here we are trying to reduce the number of things that we throw away: rubbish, garbage. We’re talking about recycling, we’re talking about reusing things — and here we’re creating more to fill these dump sites,” Terauchi said. “I know that, in a sushi bar, when I was working behind the bar, I don’t know how many times I’ve washed my hands, I’ve washed out my towels, I’ve kept things clean versus having to wear gloves, whether it’s been in the front at a sushi bar or in the back kitchen because of cross-contamination. Having to change gloves each time you touch something different, taking out the gloves to go out to the dining room because somebody would like an explanation — I was thinking how many times you would have to change gloves, and it’s kind of creating more trash for me personally.”

He believes that more education could be done, highlighting the importance of keeping things sanitary and washing hands.

“I’m not sure if this has been thought out because just the amount of gloves I know I would’ve gone through in a dinner shift, multiply that by the number of people who work in restaurants in California — that’s a lot of gloves,” Terauchi said. “I thought the movement and the ‘recycle, reuse’ kind of thing — if that’s the direction we’re trying to go to reduce the waste, to reduce the greenhouse gases, to reduce all that, it doesn’t sound like that’s a solution or that that solution is a Band-Aid, but there’s a much larger issue out there.

Apart from the environmental impact, Terauchi sees an economic impact from the California glove law.

“From the industry perspective, I think that putting restraints like this make it tougher. To be a business here in California, with so many businesses closing, with a lot of big business leaving the state, whether it’s taxes or regulation or things like that, it’s just making California a tougher place to do business,” Terauchi said.