A Remembrance of a Dear Friend, Norman Y. Mineta

I’ve been very fortunate in having many great friends during my lifetime. Norman Yoshio Mineta was very special. At gatherings, he and I would sit together, and we wouldn’t talk much. We didn’t have to. And the time was precious.

Norman passed away of a heart ailment with his family by his side in Edgewater, Md., at age 90 on May 3. He was born to Japanese immigrants in San Jose, Calif., on Nov. 12, 1931, and was the youngest of five children. He was 10 when Japan bombed Pearl Harbor, drawing the U.S. into World War II and changing his life forever.

He was wearing his Cub Scout uniform and clutching a baseball mitt and bat when he and his siblings boarded a train in San Jose to Heart Mountain, Wyo., following the issuance of Executive Order 9066. He recalled a U.S. soldier confiscating the bat, calling it a deadly weapon.

“Some say the internment was for our own good,” Norm later recalled. “But even as a boy of 10, I could see the machine guns and the barbed wire faced inward.”

They stayed at Heart Mountain for only 18 months. The Mineta family had to be removed for their safety. “No-Nos,” the pro-Japan [faction] and others broke the windows of their barrack room when it became known that Norm’s older sister, Etsu, was engaged to Mike Masaoka, the executive director of the JACL. Their misguided anger blamed Masaoka and the JACL for the incarceration. 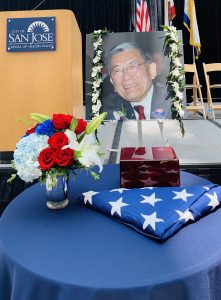 Norman Mineta’s ashes were placed to Rest in Honor, the first such ceremony in the San Jose’s history. (Photo: Tammy Matsumoto)

Norman Mineta was a teenager when his family returned to San Jose. Norm graduated from the University of California, Berkeley, in 1953 and then served for three years as an Army intelligence officer. He then worked for his father’s insurance company in San Jose before being prepped by the city’s Japanese American community leaders for political office.

I asked Norm, “When you sold your first insurance policy, did you ever think that you would … ” He started to laugh because he knew my next words “ … become secretary of Commerce?”

During his tenure in Congress representing Silicon Valley from 1975-95, he championed civil liberties and played a key role in the passage of the Civil Liberties Act of 1988.

President George W. Bush, tapped him as secretary of Transportation in January 2001. His career was most sharply defined by the terrorist attacks on Sept. 11, 2001.

While some in the nation wanted all Arabs and Muslims in this country rounded up and placed in concentration camps, to his credit, President Bush stated that we weren’t going to do to the Arab and Muslim Americans in this country like we did to Norm and his family. Norm was in the right place and at the right time.

Bush awarded him the Presidential Medal of Freedom, the nation’s highest civilian honor, saying Norm was “a wonderful American story about someone who overcame hardship and prejudice to serve in the United States Army, Congress and the Cabinet of two presidents. As my secretary of Transportation, he showed great leadership in helping prevent further attacks on and after 9/11. Norm has given his country a lifetime of service, and he’s given his fellow citizens an example of leadership, devotion to duty and personal character.”

San Jose’s airport had been named in his honor in 2001 — Norman Y. Mineta International Airport. “What an honor, I told him.” He replied, “Yeah, but this little old lady came after me at the airport. ‘You, Mineta?’ she asked. ‘Yes.’ ‘Well, there’s not enough ladies’ rooms in this airport!’ ”

Today, there’s the Norman Y. Mineta Highway (a portion of Highway 85 in San Jose). Light-heartedly, he told us not to call him if we get a speeding ticket on that stretch of the road.

When Norm was serving in Congress, a Los Angeles man sent him a token gift to make up for what he had lost as a boy. It was a bat that had belonged to and was signed by Hall of Famer Hank Aaron. It was worth $1,500 — more than the $250 a House member could accept as a personal gift, according to federal rules — and Norm had to return the bat to its sender. “The damn government’s taken my bat again,” he said at the time. Post script: When he worked briefly at Lockheed-Martin as a civilian before becoming secretary of Transportation, the U.S. government returned the bat to Norm, saying they had no use for it.

Norm and I were on the same frequency, and at gatherings, dinners and conventions, we would gravitate toward each other, for we were both the youngest in the family, experienced “camp,” our families were threatened by the pro-Japan [faction] and No-Nos, served in the U.S. Army, worked for JACL’s basic mission and became public servants. In my role as a public school teacher, I, too, served the public.

One of the last remembrances that we have of our dear friend was when he stood up with our Watsonville-Santa Cruz JACL chapter at the 2019 National Convention in Salt Lake City, in support of our Nisei 100th/442nd/MIS’s opposition of an apology resolution to the Tule Lake No Nos. We lost that vote.

I asked, “Of all the assignments you’ve had, which did you enjoy the most?” Without hesitation, he replied, “Mayor of San Jose. I saw things getting done!”

Think of Norm when you’re at the Norman Y. Mineta International Airport in San Jose or at any airport, at the National Japanese American Memorial to Patriotism in Washington, D.C., on the light rail in San Jose, on Highway 85 or when you think of our JACL mission for civil and human rights, for social justice and equality and educational outreach on our Nikkei history.

Norm helped to break the color-race-political barrier for Asian Americans in this country, for which we are eternally grateful.

“Hey, Uncle Mas!” Oh, that is how Norm greeted me, and that’s another story …

(EDITOR’S NOTE: Mas Hashimoto passed away on June 20. The world has lost another legend.)