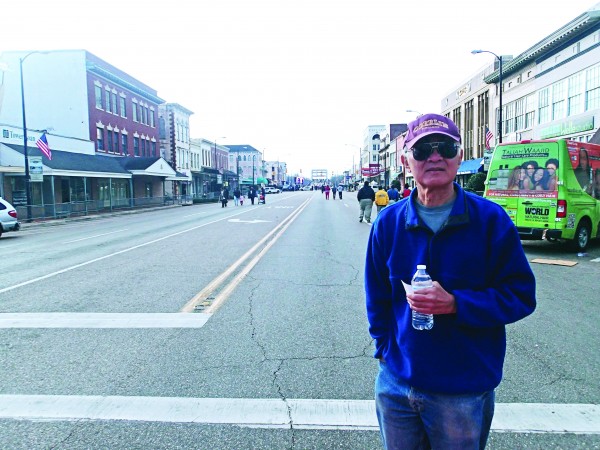 A Return to Selma

‘Selma is a strategic battleground for the civil rights leader, a source of indignation and commitment for the outsider.” These were the words by Todd Endo, an Oberlin graduate and JACLer who participated in the Selma to

A commemorative plaque marks the site where marchers rallied for civil rights.

Montgomery Freedom Marches in 1965. Along with planning protests with members of the Student Non-Violent Coordinator Committee and the Southern Christian Leadership Conference, Endo wrote about his experiences in Selma, Ala., in the Pacific Citizen in 1965. He returned to Selma earlier this month for the 50th Anniversary Selma Bridge Crossing Jubilee.

Held from March 7-8, the jubilee included a variety of programming, including a speech by President Barack Obama and a walk across the Edmund Pettus Bridge. Endo made the trip with his wife, Paula, and met up with his three grandchildren in Georgia, some of whom had watched the film “Selma” prior to the anniversary event and had some context as to what the milestone was all about.

“I went for two reasons. The more philosophical reason was to see what changed and what hasn’t,” Endo said. “The second was more personal in that I hadn’t been there in 50 years, and it was like, ‘How am I going to feel in Alabama 50 years later?’ I could go back to places I had been to 50 years ago. It wasn’t nostalgia but reliving an event and wondering how it was different now and then.”

During this year’s trip across the Pettus Bridge, thousands of people walked over the structure, lined up shoulder to shoulder. One of the things that struck Endo on this visit was that there were more Asian American-led delegations, including the JACL, commemorating the work in Selma in 2015 than in 1965. A highlight for him was speaking with Vincent Wu, another Asian American who had been involved in the 1965 marches in Selma.

(From left) Vincent Wu, Todd Endo, Paula Endo and their two grandchildren. Wu and Endo met for the first time at the Jubilee; Wu also participated in the original Selma march.

As a young adult, Endo learned early on about Japanese American internment during World War II from his family, and his mother stressed to him that Japanese Americans should not only focus on the injustices faced by them but also the injustices against all ethnic groups. Endo’s family was incarcerated in Rohwer, Ark., for more than two years before moving to Ohio in 1944.

“I didn’t realize at that time, but it wasn’t the usual practice for adults to tell Sansei of what the experience of being interned was,” said Endo, who was born only 23 days after the attack on Pearl Harbor on Dec. 7, 1941. “My family was very open about that, we had a lot of discussion, had stories from a lot of different aunts and uncles and parents. I was well-versed by the time of Selma, about the Japanese American experience in World War II and the injustices of it.”

In 1965, Endo traveled from Boston to Selma to participate in the 1965 Voting Rights Demonstrations, spurred on by the death of his friend, Rev. Jim Reeb, and the want to stand against discrimination of ethnic groups.

Following the 1965 marches in Selma, Endo pivoted from aspiring history professor to activist. Apart from the piece about the 1965 marches, Endo continued to contribute as a columnist for the Pacific Citizen from time to time.

“I have always liked to write, so I would either write about things I read or things I experienced,” said Endo. “Three or four or five columns on Japanese heritage or Asian American heritage or what is my heritage — that was the big theme. Another part of it was about the JACL and how we should be using our experiences and history to work with other people.”

He highlighted his motivations for pursuing activism in the Pacific Citizen.

“I hope that my thinking aloud echoes the thoughts of many readers, because I feel that we all should be seriously weighing the importance of the civil rights movement in our lives. The biggest hurdle to our involvement is ourselves, for mountains of work are waiting for people of all talents, immense or meager, specific or general,” wrote Endo in 1965. “So, the question is not, ‘What is there for us to do?’ Rather, the question is, ‘Do we care enough to rise from our complacency and comfort?’”

In that same article, Endo described a unified community of blacks working toward voter rights.

“Now most of this community has fallen into ranks behind Martin Luther King in this monumental campaign. Unity has be seen in the ease with which the thousands of outsiders are transported, housed, and fed,” he wrote. “Unity can be seen in the friendly way each one greets you as welcome brother in the movement.”

He believes that a unified community is still important and saw the importance of unity at the 50th Anniversary Bridge Crossing Jubilee.

“We got a lot of attention of photographers and interviewers and individuals that came up. Some of it was the signage, one that got the most attention was Asians for Black Lives, and I think that was probably a theme of camaraderie along the different groups, along racial and ethnic lines,” said Endo. “There were a lot of positive statements and questions that they received from other marchers, a lot of singing and chanting, and that was good and enthusiastic and built on one another. It was a very friendly crowd and purposeful, the idea of working across lines, whether it was race or ethnicity or age.”

From his experience at the 50th Anniversary Selma Bridge Crossing Jubilee, Endo believes that there is still much work to be done. To him, Selma hasn’t changed much in that there continues to be many people in need in the poor, rural community. His experience in Selma reaffirms the work that he has been doing as an activist. 