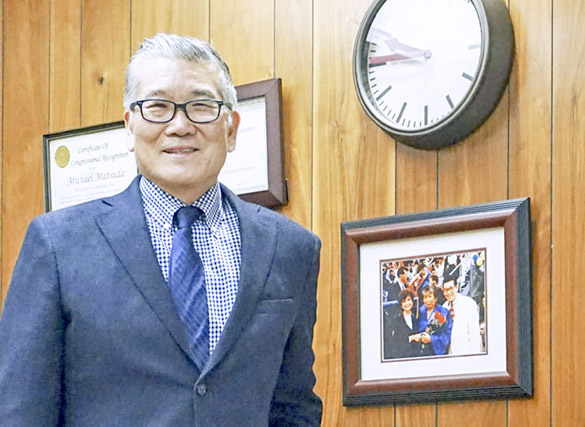 A Success Made in Anaheim

AUHSD Superintendent Michael Matsuda in his office. On display on the wall is his mother’s Anaheim High School graduation photo, which serves as a reminder of how much she inspires him every day. (Photo: Patti Hirahara)

For Anaheim Union High School District Superintendent Michael B. Matsuda, his inspiring family story all begins with his mother.

In looking for stories related to the Japanese American incarceration experience across the country and ones that are especially timely due to the 77th Anniversary of the signing of Executive Order 9066 during World War II, the Ikeda-Matsuda family history, in Anaheim, is a truly amazing story.

In 1942, a young Anaheim High School freshman named Ruth Ikeda was a member of the school’s Japanese Club, but her time there was short-lived since she had to leave her friends due to the Japanese American incarceration during WWII.

It was also a difficult time since her mother had recently passed away, and the family was grieving. The Ikeda family lived in Stanton, Calif., and Ruth rode several miles by bicycle to school each day; that bicycle was her pride and joy since she saved enough money to purchase it.

But when the U.S. government ordered the forced evacuation of Japanese Americans in May 1942, Ruth along with her five sisters, two of whom had already graduated from Anaheim High, and their father had to abandon everything except what they could carry. Ruth’s new bicycle, which was considered quite a luxury during those days, was gone forever.

In looking at the 1942 Anaheim High School yearbook, one can see a group photo of Ruth with other Japanese American and Japanese school members, but that is the only evidence that she ever attended school there.

There were more than 30 students from Anaheim High that were incarcerated behind barbed wire between 1942-45. In those days, Anaheim High School was the only high school in Northern Orange County where Japanese American and Japanese students, living in that area, could attend.

Orange County families were sent to the Colorado River Relocation Center, more commonly known as Poston in Arizona, which had more than 1,600 people sent there from the area. Covering 71,000 acres, Poston was the largest of the 10 American concentration camps, having a total of three camps in one location.

According to information in a story carried in the Anaheim Union High School District’s “Good News” newsletter in June 1997, “One person who eased the pain and confusion for many of the evacuees was the principal of Anaheim High, at the time, Mr. Paul Demaree. He displayed great sensitivity and courage in dealing with the incarceration.”

The article continued, saying that “he corresponded with many of his students and gave them a sense of dignity and hope for the future.” Mr. Demaree held a special assembly on campus and explained to the rest of the school what was happening to their fellow Japanese American students.

“He did not tolerate prejudice and was upset that the [incarceration] was going on. On top of that, this kind man actually took the time to write to tell us that he cared. It was really a brave gesture,” recalled Ruth Ikeda Matsuda, whose husband’s family was also sent to Poston.

Demaree, who was born in Japan to missionary parents, was named principal of Anaheim High School in 1941. He continued in that position as principal/superintendent until 1955, when he vacated his post to become the full-time superintendent of the Anaheim Union High School District in 1956. The first Japanese American students returned to Anaheim High in 1947, and Demaree retired from his position in 1958.

Ruth Ikeda Matsuda didn’t realize it, at the time, but she was putting her family mark on Anaheim, Calif., history for future generations.

In the late 1990s, her son, Michael Matsuda, then a junior high school teacher in the Anaheim Union High School District, heard about an initiative in San Francisco to present diplomas to former Japanese American students who were sent to incarceration camps during WWII.

Michael Matsuda wanted to hold the same ceremony here in Anaheim for his mother and others who had experienced the same ordeal at Anaheim High.

His mother resisted the idea initially until the Anaheim Union High School District agreed to posthumously honor her former Anaheim High School Principal Paul Demaree for everything he had done for his Japanese American students during WWII.

Said Michael Matsuda about how strongly he felt in pursuing the long-overdue recognition for his mother, Demaree and other classmates: “It’s about justice and making a wrong into a right.”

“She could have said no, but she totally embraced the idea and felt that it would send a message to young people in the district of what America stands for,” he said.

At the age of 71, Ruth Ikeda Matsuda and her former Anaheim High School classmates Toru Sugita and Ruth Watanabe Shingu received their diplomas 52 years later, marching alongside hundreds of seniors from the AHS Class of 1997.

“It was a proud moment,” Michael Matsuda said, and he is reminded of that moment each day when he walks into his office and sees his mother’s graduation photo on his wall at the Anaheim Union High School District headquarters. It is an inspiration of what he was able to achieve for his mother and her classmates while she was still alive 22 years ago. This proud moment also reminds him each day of the experiences she faced during the incarceration and what he never wants to see happen again.

“Only in America could a son grow up to become the superintendent of the school district from where his mother was forcibly removed and incarcerated because of her place of birth,” he said. Today, Michael B. Matsuda is a nationally recognized 21st-century educational leader who leads the Anaheim Union High School District as its superintendent, 77 years after his mother’s principal, Paul Demaree.

Matsuda assumed the role of superintendent in March 2014, having previously spent 22 years as an educator in the Anaheim Union High School District. He began teaching at Orangeview Junior High School, where he was twice selected as “Teacher of the Year.” There he taught multiculturalism to students from countries all around the world. He also taught honors English classes at the Oxford Academy. However, it was an honor that his mother was unfortunately never able to witness, since she passed away before his appointment.

Known for his leadership in creating innovations, entrepreneurship and building creative collaborations with private, public and nonprofit sectors, Michael Matsuda has transformed and extended educational opportunities for all students in Anaheim.

In his five years as superintendent of AUHSD, he has been honored as one of the 12 national “Leaders to Learn From” awardees from Education Week Magazine, the “Visionary Education Leadership Award” from California State University, Fullerton, and the California Association for Bilingual Education 2017 Administrator of the Year award.

In addition, he received an honorary “Doctor of the University” from Chapman University in 2017, and in 2018, he received the State Administrator for Social Studies Diane L. Brooks Award.

Michael Matsuda’s passion and energy in creating new programs for Anaheim is a labor of love, especially when listening to him explain each new endeavor he is now implementing when I met with him at his office.

The new Anaheim Union Educational “The Pledge” program through the Anaheim Union High School District has created an impressive list of accomplishments:

With more than a century of serving students, AUHSD is the premier school system in Orange County in the state of California. Founded in 1898, the AUHSD has a student population of approximately 31,000, making it one of the largest school districts in the state.

The district covers 46 square miles and stretches across the cities of Anaheim, Buena Park, Cypress, La Palma and Stanton. Its students, who speak 49 different languages in their homes, attend 21 campuses that equal the size of two Anaheim stadiums plus parking lots. It also employs almost 3,000 employees, making AUHSD the third-largest employer in the City of Anaheim.

AUHSD is proud of the many academic accomplishments of its students and teachers. Thirteen AUHSD campuses are designated as California Gold Ribbon Schools for their academic excellence, and they join seven California Distinguished Schools and five California Democracy Schools. Additionally, Oxford Academy, which is representative of the entire district as it draws students from across the district, annually is ranked as the No. 1 or No. 2 school in Orange County and the state, and ranks near the top nationally. Oxford also earned National Blue Ribbon status from the U.S. Department of Education, while Savanna High School was designated as a National P-21 Exemplar School.

It is also the first school district in Orange County to offer graduates a “Seal of Biliteracy” on their diplomas. To attain the seal, students must show mastery of English and Spanish, Japanese, Mandarin, French, Korean, Vietnamese or Arabic. The program recognizes that the mastery of two languages is a valuable asset for graduates to be able to participate in this diverse 21st-century economy. During its first academic year 2010-11, about 200 students earned this special recognition; that number swelled to nearly 1,200 in 2017-18.

In 2017, Michael Matsuda led two busloads of students from the AUHSD to witness the commemoration of the 75th anniversary of E.O. 9066 by visiting Manzanar. While on a tour of one of the rebuilt barracks, which depicted the horrible conditions of open toilets and rickety beds with nothing but straw mattresses, a student behind him said, “Wow, this is pretty nice.” Matsuda then turned around and asked him to explain what he meant. The student said, “At least they had a place to sleep, while I sleep with my brother on the garage floor.”

For Matsuda, this is one of the challenges he faces — the reality of how some of his students live today. He is happy he is able to provide educational experiences, for these students, that they may never experience in their everyday lives. In addition to showing them his own family’s personal experiences 77 years ago, he also reflects on today’s current times.

With his energetic compassion, Matsuda continues to make new strides in promoting his “Anaheim Kindness Project,” as well as his new program “Unlimited You.”

For the Matsuda family, starting with a mother who was educated in Anaheim, only to have her learning experience cut short due to the incarceration of Japanese Americans during WWII, to raising a son who would become head of the entire AUHSD, their story is one that clearly shows how diversity, hard work and a love of giving can overcome adversity and bring about change to an entire community. Ruth Ikeda Matsuda would have been so proud.