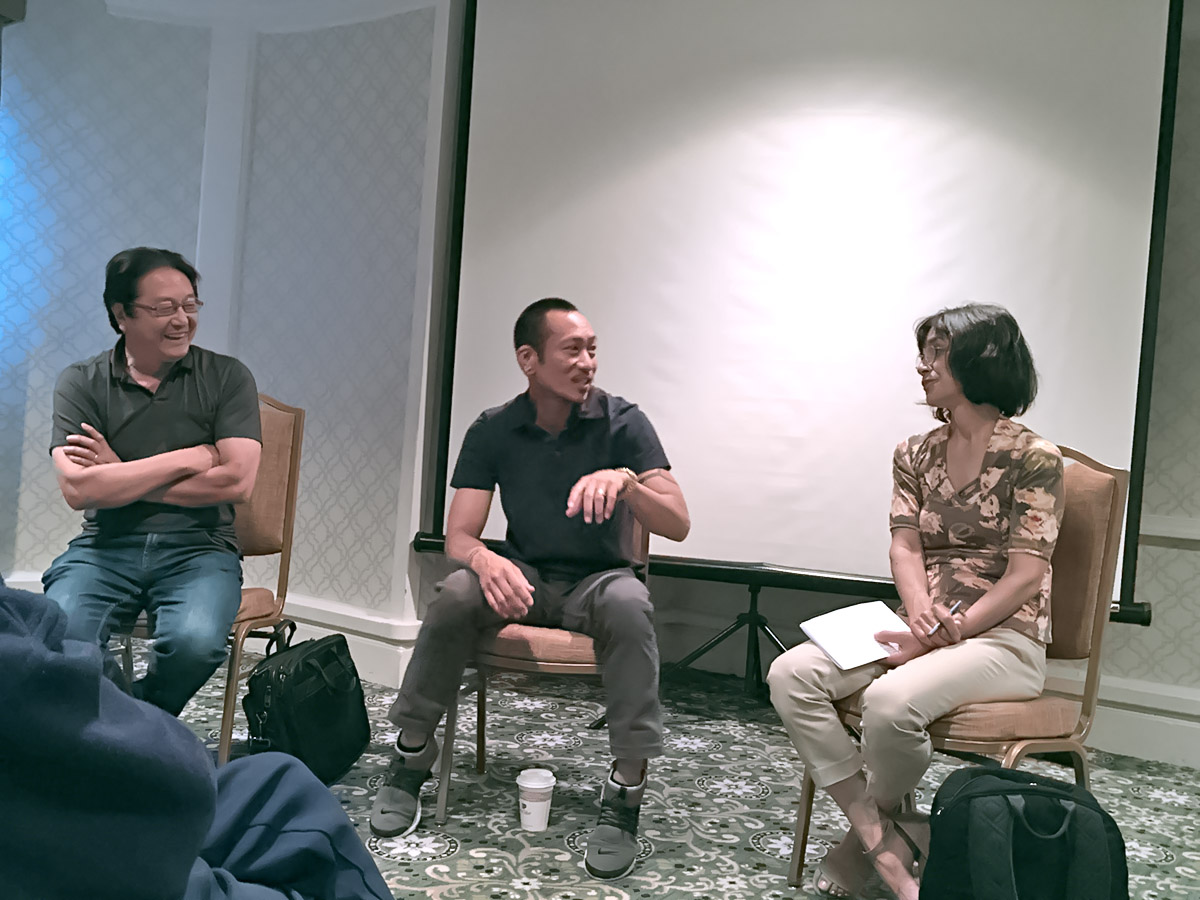 In 1919’s “Broken Blossoms or the Yellow Man and the Girl,” the man who played the Chinese character was a Caucasian actor employing prosthetic makeup, a practice later known as yellowface.

Anna May Wong, a Los Angeles-born Chinese American actress who started her career in silent movies, was denied the chance to play the lead role of a Chinese woman in the China-set “The Good Earth” in 1937. That part went to white actress Luise Rainer, in yellowface. She won the best actress Oscar.

Fortunately, nearly a century after those early cinematic efforts, practices like yellowface became a thing of the past.

In 2015, Japan-based Sony Pictures Entertainment’s Columbia Pictures released “Aloha,” in which Emma Stone played a woman of mixed Asian, Pacific Islander and white ancestry. In 2016, Disney’s Marvel Studios division produced “Dr. Strange,” and a few months later in 2017, Paramount Pictures released “Ghost in the Shell,” a movie adaptation that deviated from source material by, respectively, changing an elderly Tibetan man into a younger white woman (Tilda Swinton) and a female Japanese character into, yet again, a white woman (Scarlett Johansson).

It was in this milieu that a workshop titled “AAPI’s Portrayal in the Media & Arts” was held on July 8 at the JACL National Convention in Washington, D.C. The informal panel was moderated by Rob Buscher, Philadelphia JACL chapter board member and director at the Philadelphia Asian American Film Festival.

On the panel to address those and other issues were playwright Rick Shiomi, choreographer Makoto Hirano and journalist Kathryn Tolbert. Buscher noted that each one had a slightly different trajectory and perspective as Nikkei people — for Hirano as a Shin Issei, for Tolbert as a person of mixed Japanese ancestry and for Shiomi as a Japanese Canadian.

For Hirano, a Philadelphia-based dance, theater and spoken-word artist — and former Marine — his outlook was influenced by being born in Japan, having Japanese parents and speaking Japanese as his first language, but also by growing up in Chicago.

He said that looking back on his early years as an artist, it’s much clearer now than at the time why he took the direction he did.

“I think I had to figure out how much of my identity was going to be placed in being Japanese or Japanese American because that was the obvious place to come from,” Hirano said. “I felt very Japanese, but not Japanese American. I had to consider all these things early in my career, and it was kind of a weird, uphill battle.”

Ultimately, Hirano realized that everything he created was, by default, going to be Asian American or Japanese American.

Tolbert, the deputy editor of the Washington Post’s Talent Network for freelance journalists, has spent most of her nearly 40 years as a professional journalist with mainstream newspapers.

She described her native Japanese mother who married a white U.S. serviceman after World War II as a “tiger mom” who wanted to be a writer or a journalist, and she pushed her first-born daughter in that direction.

As it turned out, Tolbert’s Japanese ancestry helped in her quest to become a foreign correspondent when, early in her career, Japan’s then-roaring economy was a hot topic. She landed jobs with the Associated Press, the Boston Globe as foreign editor and at the International Herald Tribune as deputy Asia editor.

Still, Tolbert said she never considered herself a minority.

“For me, the fight was really for women’s positions,” she said. “It was less about being part-Japanese than being a woman.”

For the last few years, however, as Tolbert worked on a documentary titled “Fall Seven Times, Get Up Eight: The Japanese War Brides,” she seemed to reassess her identity.

For Shiomi, writing plays for the Asian American theater world was key for his professional development.

“It wasn’t until I really learned my own history about the Japanese Canadians and the Japanese Americans that I really found my voice as a writer,” he said, “and then going down to San Francisco [where] I was able to get involved in the Asian American Theater Co. there and write my first play called ‘Yellow Fever.”

As for why Asian Americans and Asians have been misrepresented since the earliest days of Hollywood, Shiomi —whose résumé includes co-founding Theater Mu, receiving a 2015 McKnight Distinguished Artist award and serving as the co-artistic director of the new Full Circle Theater Co. in St. Paul, Minn. — referred to his experience in Asian American theater and asserted that for the past 200 years in the U.S., “the premise of existence is that you’re white, you’re of European American culture.”

Shiomi noted that Asian American movie actors face a similar situation, but that theater actors at least have the Asian American theater world to get the opportunity to hone their craft and gain legitimacy.

When an audience member asked how long it might take for acceptance by American audiences for actors of Asian descent on stage and screen, Hirano said, “The way that America looks right now, if it continued on this path, it will never change.”

Citing how demographic changes are trending right now, Shiomi said he disagreed with Hirano’s assessment, saying that it would happen — but that it would take 50 years “if we’re lucky.”

Shiomi also cited a different trend that has emerged in recent years that bodes well for the improvement of the status quo, namely young Asian Americans —who have gained fans on YouTube, i.e., American comedian-actor Ryan Higa, who supposedly has more than 4.8 million followers under his username “nigahiga.”

“There’s this whole online, Internet world that’s happened in the last 20 years. What’s interesting about that is Asian Americans are doing extraordinarily well in that medium,” Shiomi said. “That’s because it’s a medium that doesn’t have a producer who’s going to say who’s going to have an appeal. It just says, ‘You put your video up on YouTube, and we’ll see how many people look at it.’

“If 200,000 people are looking at an Asian American person in their bedroom talking to the camera, something’s going on, something that the people who are running the [entertainment] industry don’t understand,” he concluded.

As the panel wound down, Buscher urged those in the audience to support Asian Americans in the arts and with regard to movies by and/or starring Asian Americans.

“Do your best to try and go see that movie in theaters, and if you can, go on opening weekend,” Buscher said, “because that’s a surefire way to send a message to the theater, to the company distributing the film and even to the filmmakers themselves that this is something people care about.” 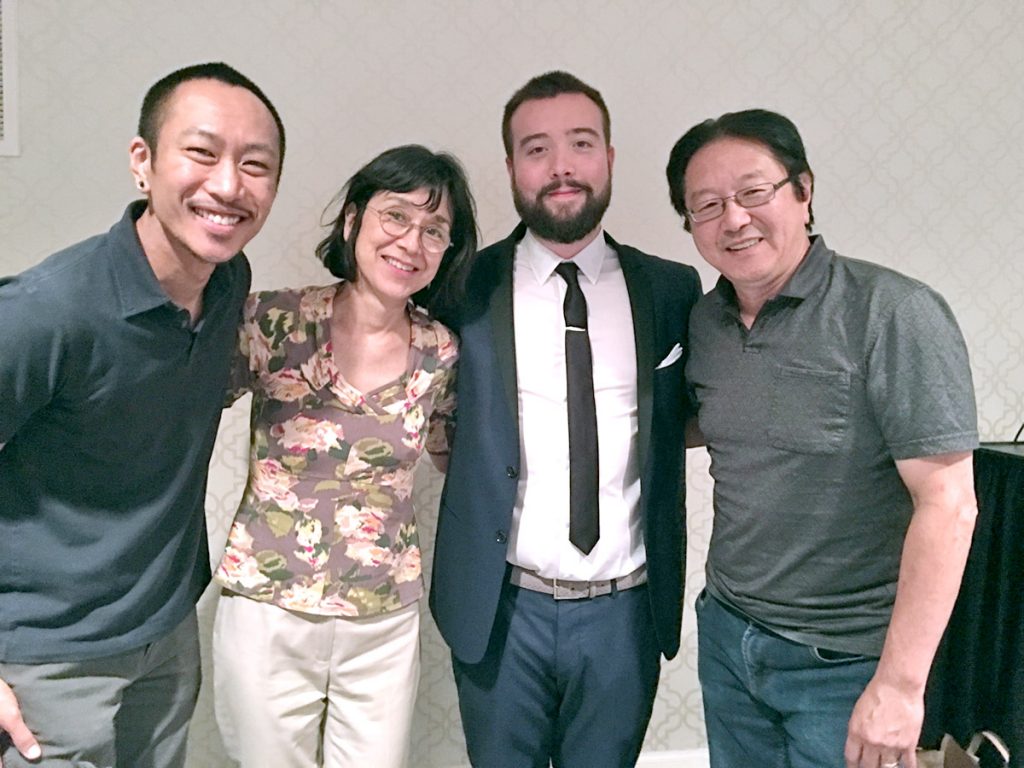