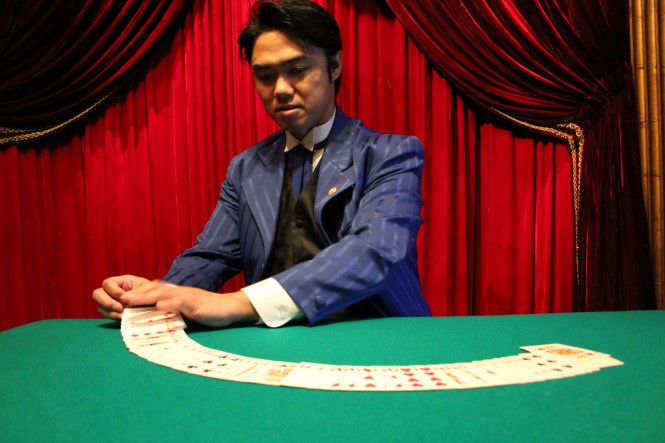 All it Takes is Magic

Around 1 a.m. at the illustrious and haunted Magic Castle in Hollywood, Calif., sat Shoot Ogawa recently after his final performance in one of the famed venue’s small showrooms. He’s tired and satisfied with the shows he performed that evening. He’s finally ready to head back to his apartment, located only a few minutes away.

But the 38-year-old magician, born and raised in Tokyo, Japan, calls the Magic Castle his true home. Over the course of his 28-year career with cards, rings, stages and spotlights, Ogawa stands with one foot in Tokyo and the other in Hollywood, bridging the two worlds together. 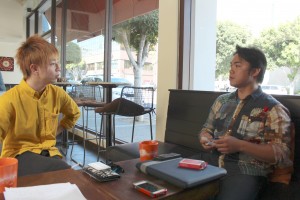 Today, Ogawa mentors Akinobu Mitsui, an up-and-coming slight-of-hand magician who also performs at the Magic Castle on a weekly rotation.
“He’s really one of the premier performers,” Ogawa admitted about his student. “He’ll spend days or months perfecting the same trick over and over again because that, to me, is talent — to be so dedicated.”

At the Victorian-era mansion, which has hosted some of the greatest magicians in the world since it first opened its doors in 1963, Ogawa coordinates shows for the Academy of Magical Arts, a nonprofit organization whose members include some of the most celebrated magicians and illusionists in the world.

Last month, he curated the fourth annual “Magic of Japan Week,” where magicians from Japan came to perform their unique style, humor and Japanese magic to Castle guests.

“It is my honor to work with each performer,” said Ogawa. “I am very excited to bring some of the best magicians from Japan to perform at the Magic Castle — some of whom are appearing in America for the first time.”

In the early years of Ogawa’s career, magicians tried to soil his name, calling him a masked magician who exposed secrets and tricks. In 2001, magic societies in Japan branded the TV series Ogawa performed on as dangerous because he explained how tricks were done. The show, in fact, was a kids’ program. Ogawa wanted to inspire future magicians and allow them to witness the possibilities of magic, inviting everyone to participate. Unable to deal with the gossip and the belief that all Japanese magicians hated him, Ogawa looked across the Pacific, where the Magic Castle had approached him.

When Ogawa first arrived in America, he struggled with custom and culture changes. He didn’t have another Japanese magician to help him transition easily. Japanese mannerisms didn’t have a place on an American stage for him, but it never changed his magic.

“I just want to be me,” Ogawa explained. “On and off the stage, I’m the same person.”

He was following his dream of performing magic, recognizing from a young age its ability to bring people together and bring wonder to their worlds.

Now in Hollywood, Ogawa explained to members of the Magic Castle that he wasn’t destroying magic, despite what others said. With VHS copies of his video programmed and a word-for-word translation on the screen, Ogawa landed a job at the Castle and a world tour to Europe and South America.

In 2002, he took first place at London’s MacMillan International Magic Convention with his double-hand matrix and ninja rings routine, making him world renown for his slight-of-hand techniques. No fancy stage props or flashing lights needed. The following year, the American Academy of Magical Arts awarded Ogawa as its “Magician of the Year” in the Close-up Category.

Since then, Ogawa has been mentoring up-and-coming magicians like Mitsui, and he is proud of his transitional leap from Japan to America,
all while keeping his magic intact.

To this day, Mitsui continues to wow American audiences at the Magic Castle, and he is grateful to Ogawa for imparting his knowledge of the industry on to him.