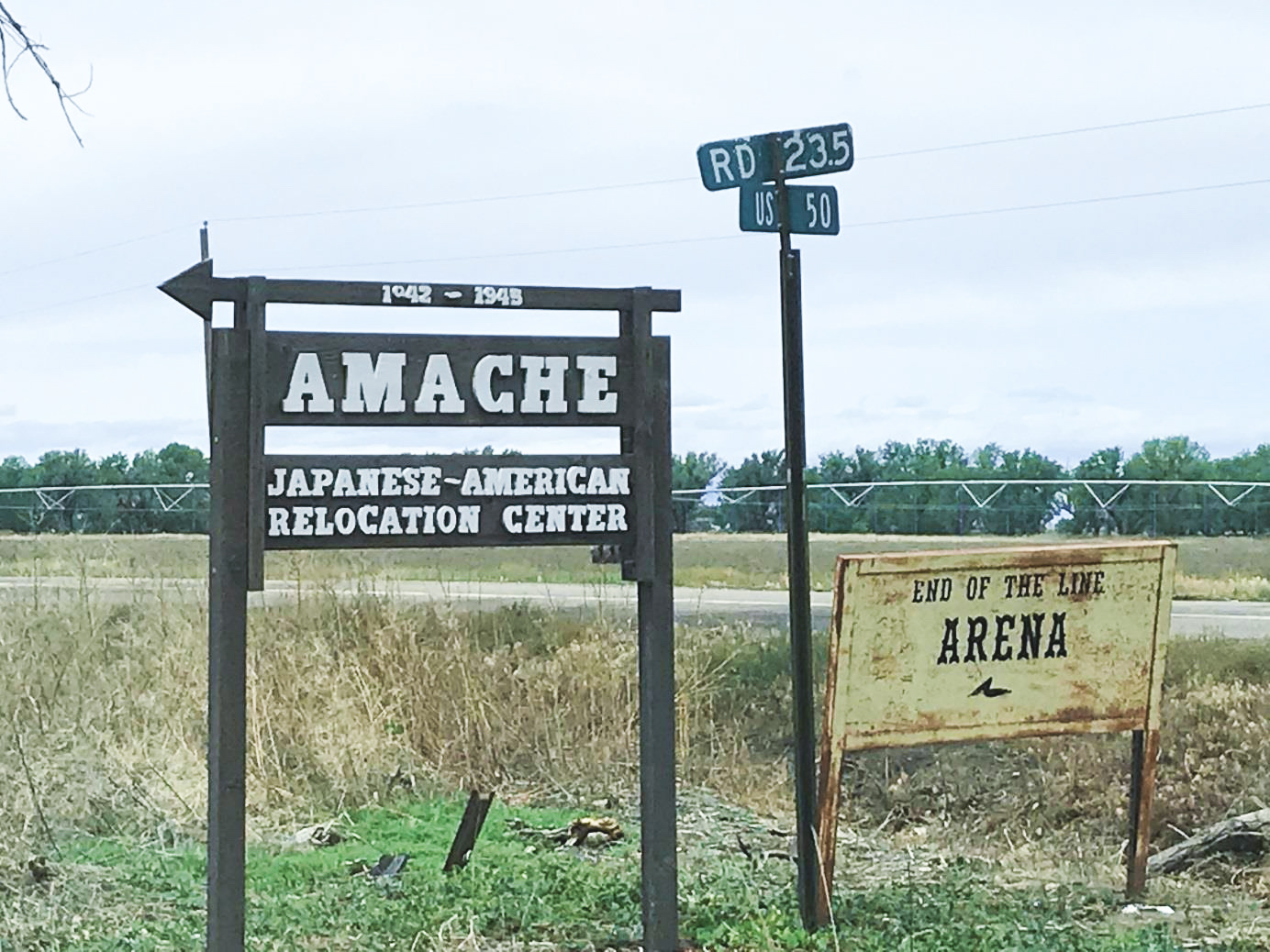 Once signed into law, the former incarceration site in southeast Colorado will fall under the protection of the National Park Service. Survivors and descendants of Amache will have their story honored, interpreted and preserved for generations to come.

The bipartisan legislation by Reps. Joe Neguse (D-Colo.) and Ken Buck (R-Colo.) overwhelmingly passed the House by 416-2 in July 2021. In the Senate, with leadership from Michael Bennet (D-Colo.) and John Hickenlooper, (D-Colo.), the bill passed unanimously, and slightly amended, through the Senate energy committee in the fall of 2021. The bill next heads back to the House of Representatives for a final vote.

“This continued growth of our national park system is crucial for it to preserve locations and stories in American history, including those that are not easy to hear but essential to tell,” said Theresa Pierno, president and chief executive of the National Parks Conservation Assn. “The unconstitutional imprisonment of Japanese Americans is an undeniably tragic story. But by preserving Amache, we can ensure that as a country we confront our mistakes, honor the stories of those who were unjustly imprisoned and protect the site for future generations.”

“Through bipartisan action and listening to the enduring voice of the Amache community and all of us who have called for its history to be preserved, we will soon see the Amache National Historic Site in our park system,” said Tracy Coppola, Colorado senior program manager at NPCA. “We commend Senators Bennet and Hickenlooper and Congressmen Neguse and Buck for their leadership in providing a critical opportunity for our country to respect, honor and heal at Amache.

“We are forever grateful to the Amache Preservation Society, the Town of Granada, the National Park Service, Gov. (Jared) Polis, Amache descendants and the storytellers, historians, civil rights and military veteran groups, offices of tourism, preservation offices, county commissioners and other local elected for seeing this through. Amid the tremendous local and national support, this moment stands on the shoulders of giants — the Amache survivors, who, with incredible generosity and strength have waited for this day for so long, and who now will never be forgotten,” Coppola added.

“I have waited many, many years to see the day where we can be certain that Amache, as a place of reflection, remembrance, honor and healing, is protected for our current and future generations,“ said Bob Fuchigami, an Amache survivor. “Passage of the Amache National Historic Site Act in the Senate brings me hope that we are finally closer to this certainty, and I thank Senators Bennet and Hickenlooper for their leadership. My parents did not live to see this day. The time is not only right; it is long overdue.”

“My father, David Takada, along with my grandparents, Kakuji and Fumi Takada, and my uncle, Andrew Takada, were all incarcerated in Amache,” said Michael Takada, Amache descendant and chief executive officer of the Japanese American Service Committee. “They lived for decades with a sense of shame and deep emotional pain and trauma. My grandparents have passed away, but my dad and uncle, 97 and 95, respectively, are fortunately alive and in relatively good health. But we have a narrow window to help heal these wounds and provide a sense of closure for them and the few remaining Amache survivors. With each day, we are losing survivors and descendants. Thanks to bipartisan leadership in the U.S. House and Senate, the Amache bill is very close to the legislative finish line.”

Nearly 80 years ago, President Franklin D. Roosevelt signed Executive Order 9066, putting in motion one of the most shameful events in U.S. history that forced over 120,000 Japanese Americans — mostly U.S. citizens — from their homes. The men, women and children were sent without trial into incarceration sites and detention centers located primarily in the West and Southwest.

Japanese American incarceration was a part of the United States’ unconstitutional treatment of people of Japanese descent during WWII and a symbol of anti-Asian sentiment before, during and after the war.

The Amache incarceration site was only half-built when the first prisoners arrived in 1942, forcing many to construct the very housing units in which they were imprisoned. Taken from Colorado farmers by eminent domain, the site covered 10,000 acres on the high, desolate plains of Colorado close to the town of Granada. Surrounding the site was barbed wire and guarded watchtowers.

The government finally closed Amache on Oct. 15, 1945, after more than 7,500 Japanese Americans had been taken from their homes and incarcerated there.

Amache has the distinction of having the highest rate of military volunteerism per capita than any of the other incarceration sites and its prolific silkscreen shop created more than 10,000 war posters, a likely reflection of ongoing efforts of Japanese prisoners to actively prove their patriotism. Thirty-one Amache men were killed in the war, including one Medal of Honor recipient.

Survivors and descendants of Amache have worked for decades to honor and preserve the land at risk of being forgotten, with assistance from the Amache Preservation Society, civil rights groups, veterans’ groups, academics, public lands advocates, the Town of Granada and other local and state elected officials.

Once signed, the Amache incarceration site will be protected as an official site of the National Park System, with other Japanese American incarcerations sites such as Manzanar, Tule Lake, Minidoka and Honouliuli.

“As a young boy at Amache, I never thought I’d see an America that cared about my story. I am now a 91-year-old veteran who served in the U.S. Air Force during the Korean War, 1950-54. Thank you, Senators Bennet and Hickenlooper, for your leadership and the great decisions made regarding Amache as a National Park Historic Site. When signed by the president, long-lasting U.S. history will be made.”

“Many young men at Amache served in the U.S. Army, though their country incarcerated them for their Japanese ancestry. I was 10 and incarcerated along with my mother and siblings at Amache, where I was also a Boy Scout. In 1943, our camp troop went to the Granada Railroad Station at four in the morning to see the young enlisted men off. Our scout commissioner told us to play as loud as we could. Years later, I served as a medic in the U.S. Army Korean War. In the 1980s, I worked to preserve Amache, organizing reunions and working on various preservation efforts. Thank you to the Senate for passing the Amache National Historic Act so that these efforts are not forgotten.”

“Amache should be considered a National Historic Site as well as a WWII memorial to honor the 120,000 individuals who served our country through incarceration.  My grandfather died there; my cousins were born there, and all left after ‘serving’ the U.S. in a time of war. When I think of Amache, I am proud of all those who sacrificed their lives with humble dignity and courage beyond anything I have ever had to endure. And, yes, proud that America could recognize its mistakes and provide the opportunity for the descendants to fulfill many of the dreams that were stolen. Today, we are one giant step closer to seeing this through.”

“My father, Fred Korematsu, was an American civil rights hero who bravely resisted the Japanese American incarceration during World War II and dedicated his life to protecting the civil liberties of all people. His story resonates today as a critical example of the lifelong impacts of losing one’s fundamental rights and freedoms. Now, more than ever, the lessons of history need to be learned.

I commend the Senate, and the leadership of Senators Bennet and Hickenlooper, for today’s vote on the Amache National Historic Site Act, and will be looking to President Biden to see this through.”

“The Amache site as a National Park unit highlights the injustices of the internment of Japanese Americans, one of our nation’s darkest chapters. Colorado is home to world-class national parks and adding the Amache site honors those values and our history.”

“Japanese American incarceration was part of the U.S. government’s racist and xenophobic policies throughout history. By acknowledging this part of our past, we can continue the process of healing and reconciliation. The passage of the Amache National Historic Site Act will help to ensure that the history of Amache in Colorado is not forgotten.”

“The Amache Preservation Society has always wanted to do what was best for the Japanese American families that had to endure Amache. It is for this reason that we feel that it needs to become a part of the National Park System. For the sake of our country and the future of our children, the Amache National Historic Site Act needs to become law.”

“The Japanese American Confinement Sites Consortium is proud to support the Amache National Historic Site Act, which reaffirms the National Park Service’s commitment to preserving and interpreting sites that convey difficult chapters in our nation’s history. The Japanese American story illustrates the rich cultural heritage of the nation spanning generations, while the incarceration of over 120,000 people of Japanese ancestry in violation of their civil liberties provides lessons today in learning from history and correcting our mistakes to prevent them from happening again. Because of today’s Senate passage, we now look forward to building upon a legacy of government and community partnerships to protect Japanese American confinement sites with the designation of Amache National Historic Site.”