An Open Letter on the Murder of George Floyd

We as an organization are sending our thoughts and prayers to the family and friends of George Floyd, a beloved member of the community who was callously murdered by members of the Minneapolis Police Department (MPD) on Memorial Day last week. But thoughts and prayers are not enough. We need action, and we need reform. We join the black community in calling for an actively anti-racist system that seeks out racism and works to eradicate it. 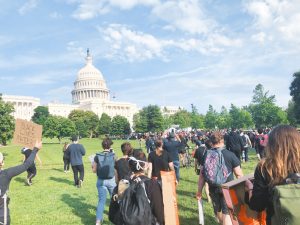 Japanese Americans have known what it is like to be unfairly persecuted by authorities on the basis of their appearance, as was the case during World War II. More recently, Asian communities around the world have been unfairly targeted by heightened xenophobia related to the COVID-19 pandemic.

And yet, we cannot pretend that Asian Americans are immune from being racist simply because we are People of Color.

No evidence of this is clearer than the role of former MPD Officer Tou Thao who willfully failed to intervene while former MPD Officer Derek Chauvin pressed his knee into George Floyd’s neck. It is the duty of all humans to actively confront racism and prevent it from claiming more innocent lives.

While many law enforcement officers are committed to protecting and serving all those within their communities, we need them to step up, speak out against and stop those who are not.

A single “bad cop” is too many, and those who allow them to remain in uniform are also at fault. It is therefore necessary for all four of the MPD officers responsible for George Floyd’s murder to be brought to justice. And, we call for concrete steps to be taken to prevent unwarranted, excessive police violence which too often results in the tragedies of officer-involved killings.

We call for the Minneapolis Police Department to transparently communicate acceptable and unacceptable officer behaviors so that civilians can report them to supervisors when necessary. To facilitate this, we call for the institution of an emergency hotline so that inappropriate or dangerous police behavior can be immediately reviewed and stopped before it’s too late.

This immediate accountability and oversight was a crucial missing piece in the murder of George Floyd. Concerned civilian bystanders were helpless to stop actions that they knew to be wrong and life-threatening. The tools we have now in some cases, including body cameras and cellphone footage, are valuable only after the fact. By then, it is too late.

Just as it is now too late to save George Floyd’s life, but it is not too late to prevent other unnecessary violent acts and murders. Now is the time to be proactive and usher in concrete reforms, reforms that extend beyond Minneapolis to the rest of the country.