It’s been a tragic and depressing couple of months. Amidst the rising numbers of anti-Asian hate incidents, including harassment, verbal assaults and physical attacks, a March 16 mass shooting in Atlanta targeted Asian-owned spas, and six of eight murdered victims were Asian women.

The attacks continued, and media covered them, and President Joe Biden spoke out against anti-Asian attacks and on March 30 released new actions to fight the violence, xenophobia and bias. The U.S. Senate passed the COVID-19 Hate Crimes Act on April 22, aimed at strengthening efforts to fight hate crimes, especially against Asians. The House will vote on the bill in May.

Also in April, a bipartisan group of Colorado’s congressional representatives and senators penned legislation to make Amache, the Japanese American wartime concentration camp in southeast Colorado, a National Park. There’s been a lot going on in the AAPI and JA communities!

Amidst all the news — both good and bad — Denver’s Asian American and Pacific Islander community got a surprise blast of bad: a rude reminder that anti-Asian hate can take many forms. 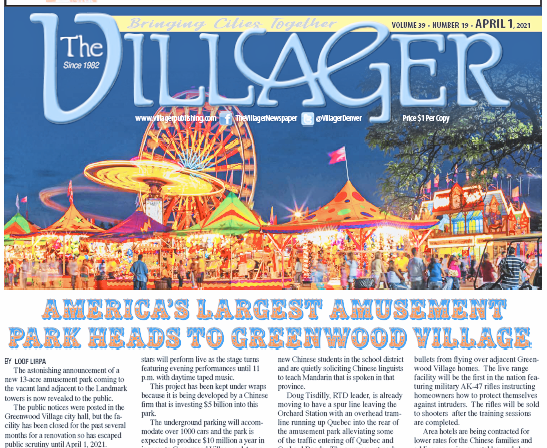 The Villager’s inappropriate April Fool’s Joke edition was met with heavy outrage from AAPI organizations and across social media for its inappropriate and racist content.

“This project has been kept under wraps because it is being developed by a Chinese firm that is investing $5 billion into this park,” the article said. “Because of the recent Asian alleged hate crimes, the planning commission and council have moved quietly through confidential Zoom meetings with Chinese officials to complete the contract.

“Several city planners traveled to Wuhan, China, to work out the details that include bringing over 1,000 Chinese workers and their families to the area for the two-year construction period.”

The article was outrageously inappropriate given the context of the attacks against Asians across the country.

But wait, there’s more! It went on to say that the area’s schools are expecting over 1,000 students from China and that the district was seeking Mandarin teachers to accommodate them. The piece also added that “area hotels are being contracted for lower rates for the Chinese families and adding more rice, vegetables and chopsticks to their morning breakfasts.”

Not surprisingly, the AAPI community, both individuals and organizations, were outraged by the publication and responded on social media. The daughter of the family run newspaper replied to comments but never apologized, just defended the article as a spoof and a joke — the old, “It’s your problem if you can’t take humor” line.

Two weeks later, the Villager published an op-ed on its cover saying it was defending the tenets of free press. At the top of the home page for that issue online, the Villager posted a note that included a nonapology apology: “The Villager would like to acknowledge our April Fool’s spoof may have been construed or perceived as inappropriate and offensive and for that the Villager is sorry. It was absolutely and sincerely not the papers (sic) intent.” The old, “We’re sorry if you were offended” excuse.

The Mile High Chapter of JACL sent its own scathing letter to the Villager, along with other area AAPI organizations.

An advertising boycott was launched by a group called Colorado Asian American Response Committee (CARC), which was formed last year when anti-Asian incidents were first reported in the state (full disclosure: I’m a member of CARC), and to date, 12 advertisers contacted us to say they’ve pulled out of the Villager, and 30 advertisers are no longer in the past two editions of the weekly. One advertiser, a real estate agency, sent a scathing letter to its clients and business networks decrying the racism of the Villager’s article.

The media has, not surprisingly, picked up the story, adding to the Villager’s embarrassment, and it was published across the country over the Associated Press wires.

If nothing else, this past year of hate against Asians has awakened the country to the constant presence of racism against Asians and helped the media begin to seek out better, deeper and more important stories about our communities. For that, I suppose, we owe the Villager a small bit of acknowledgment for its ill-timed and stupidly conceived blast of racist humor.