LOS ANGELES — The Manzanar Committee announced March 26 that Arthur A. Hansen, a renowned scholar and co-founder of the Japanese American Oral History Program, and educator Mas Okui are this year’s recipients of the Sue Kunitomi Embrey Legacy Award. 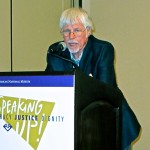 Hansen, 75, a native of Hoboken, N.J., began his work at California State University, Fullerton’s Department of History in 1966, where he would later immerse himself in the field of ethnic studies.

“In the early 1970s, I was provoked by the upsurge of protest and dissent on the campus and in the outside world, along with the rise of ethnic consciousness and Ethnic Studies, to redirect my attention to Asian American Studies and, in particular, the social disaster inflicted by the U.S. government upon Americans of Japanese ancestry during the Second World War,” Hansen wrote. “However, convinced that the standard historical version of what Japanese Americans had experienced during America’s so-called ‘good war’ was severely compromised by a criminal neglect of the voiced perspective of the victimized population. In 1972, I launched, in concert with one of my graduate students, Betsy Mitson, the Japanese American Oral History Project within Cal State Fullerton’s Oral History Program.”

A pioneering effort over four decades that focused on the unjust World War II incarceration of Japanese Americans, the Japanese American Oral History Project recorded and transcribed hundreds of interviews and, periodically, illuminated their contents and perspectives in published anthologies and unpublished theses.

Hansen, along with Embrey and Mitson, co-edited “Manzanar Martyr: An Interview With Harry Y. Ueno,” who was the principal figure in the Manzanar Riot.

“My work has embraced the full extent of Japanese American history, society and culture, [but] the lion’s share has riveted upon the protest, dissent, and resistance of Japanese American individuals and groups in relation to the history and legacy of the World War II Japanese American experience,” Hansen noted. “This is rooted in my impassioned belief that, contrary to popular belief, Japanese Americans possess a robust tradition of active opposition to unbridled, unjust and unprincipled authority.”

“One of the Japanese American community’s most ardent and consistent allies, Art Hansen is one of our country’s leading scholars on the forced removal and incarceration of the Japanese American community,” said Bruce Embrey. “Working to capture and record the history through oral histories of all who suffered, including residents of the Owens Valley, Art is known for his thorough and democratic approach.

“Art is no mere academic,” Bruce Embrey continued. “As a scholar, his focus is to get to the underlying truth. But his thorough research is imbued with fierce and tireless advocacy for social justice. He was a colleague, friend and confidant of my mother, Sue Kunitomi Embrey, and it is both fitting and long overdue that he is recognized for his role in our long struggle for justice.” 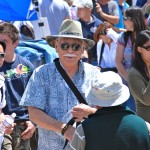 As a 10-year-old boy, Okui, 82, spent more than three years behind the barbed wire at Manzanar. That experience — the unjust incarceration of more than 110,000 Americans of Japanese ancestry during WWII — shaped his life’s purpose and dedication to keep the story alive.

Active in Asian American issues since the 1960s, Okui initiated the Asian American Studies course at Gardena High School in Gardena, Calif. He was also involved with the Yellow Brotherhood and worked with the City of Gardena’s teenage drug avoidance program.

Since the 1970s, Okui has conducted tours of Manzanar and for more than 30 years led the United Teachers Los Angeles seminar on its annual trip to the Manzanar Pilgrimage, the purpose of which was to educate teachers on how to teach their students about the Japanese American incarceration. Dozens of other groups, including the Japanese Consulate, the Japanese American Citizens League, the Los Angeles Department of Water and Power, CNN, CBS, public and private schools and civic organizations were among those that visited Manzanar with Okui.

At the Eastern California Museum in Independent, Calif., Okui has led school groups and worked with the Shiro Nomura Manzanar exhibit. During the 1990s, he served as a docent at the Japanese American National Museum in Los Angeles, talking to scores of groups about the Japanese American experience, and, as part of JANM’s outreach program, has spoken to groups throughout the nation.

For 10 years, Okui served on the Manzanar National Historic Site Advisory Commission. What is on display in the exhibit at the Visitors Center is, in part, the product of their efforts.

Additionally, Okui served on the board of the Friends of Manzanar, playing a key role in raising funds to rebuilt Block 14 (demonstration block).

“Mas Okui has been a tireless advocate and educator, telling the story of Manzanar and the forced removal of the Japanese American community to literally thousands of people, including many Los Angeles Unified School District teachers,” said Bruce Embrey. “With humor, wit and poise, Mas is one of the most ardent advocates for keeping our story alive.

For more information on the Manzanar Pilgrimage and the popular Manzanar at Dusk program, including bus transportation to the afternoon Pilgrimage program, visit the Manzanar Committee’s official blog at http://blog.manzanarcommittee.org or call (323) 662-5102.