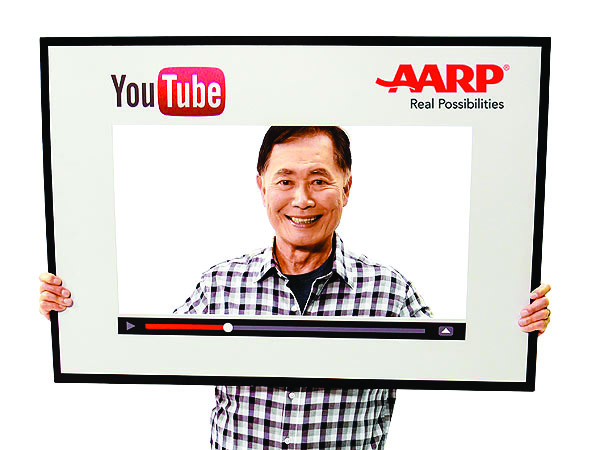 George Takei hosts “Takei’s Take,” an award-winning series on YouTube that looks at the Internet and technology through the eyes of a senior. Photo by AARP

As a journalist, I’ve been really lucky.

I started my career as a music critic and then a reporter, so I’ve always been able to write about pop culture — especially the pop culture of my generation, the baby boomers. Then, when the Internet came along, I was able to move over to work almost exclusively in digital media, and these days I work in and speak about social media. Since I started writing my “Nikkei View” column and blog, I’ve been part of a growing chorus of Asian American voices (like the Pacific Citizen) covering issues and stories that mainstream media frankly tends to ignore.

So, I couldn’t believe my great fortune last month when I was named the 2014 Asian American Journalists Assn.’s AARP Social Media Fellow.

If you aren’t familiar with the organization, AARP’s members are 50 years old and older. That means that this year, the youngest baby boomers are turning 50 and can join AARP (the baby boom went from 1946-64).

This fellowship is perfect for me because it combines the three passions that fuel my soul: my love for the era I grew up in, my embrace of online journalism and my involvement with and support for Asian Americans.

I’ll be posting messages on AARP’s Twitter (https://twitter.com/AARPAAPI) and Facebook (https://www.facebook.com/AARPAAPICommunity) pages, and I will also write articles for AARP’s page specifically for Asian Americans and Pacific Islanders (http://www.aarp.org/asiancommunity).

AARP is making serious efforts to reach out to Asian Americans. The organization describes itself as “a collection of diverse individuals and ideas working as one to influence positive change and improve the lives of those 50 and over. AARP members reflect a wide range of attitudes, cultures, lifestyles and beliefs.”

That range includes issues of health care, elder care, retirement planning, social security, legislative agendas and lots more that affect Asian Americans. There are lots of ways AARP accomplishes these goals, and one of them just won a prestigious award.

George Takei, the most famous Japanese American, thanks to his stint as “Hikaru Sulu” on the 1960s “Star Trek” TV series and ensuing hit movie franchise, speaks publicly about his childhood in an internment camp and his support for LGBT issues. He is now a video star on YouTube and throughout various social media sites. Among his online avenues, he hosts “Takei’s Take,” a funny look at the Internet and technology through the eyes of a senior who embraces the cool new stuff, and he inspires other seniors to do the same. “Takei’s Take,” which is produced by AARP, was named the “People’s Voice” winner in the Technology category for the Webby Awards. That’s proof that old dogs can(ITAL) learn new tricks.

Within our community, Asian American Pacific Islander Heritage Month is the perfect time to think about the issues that AARP highlights. Most older AAPIs were born outside the United States, and many don’t speak English at home, even if they’re naturalized citizens. So, if you’re an “Issei” Asian American, you have different needs and challenges when it comes to services and information to live up to AARP’s motto, “Real Possibilities.” If you’re a baby boomer Asian American, you share the cultural highlights of the generation (like growing up with rock ’n’ roll, and the pop culture of the 1960s, ’70s and ’80s), and you should be thinking about your life after retirement or how to stay healthy as you get older.

And, if you’re an Asian American from the younger generations, you may be thinking now about the responsibilities of caring for your parents and grandparents — because Asian culture emphasizes respect for elders, and lots of us have grandparents living with us at home.

This is an important time of generational transition for Asian Americans, so I’m thrilled to be working with AARP on these issues.

As part of my duties for the AARP Fellowship, I’ll be moderating a plenary panel about social media at JACL’s National Convention in San Jose, which will be held July 9-12. The good news is that more 50+ Asian Americans are online and on Facebook than older non-Asians. So, I may not be telling you anything you don’t already know.

I hope you attend, and come say, “Hi” after the panel!

Gil Asakawa is a member of the Pacific Citizen Editorial Board, and the author of “Being Japanese American. He blogs about Japanese and Asian American issues on his blog at www.nikkeiview.com, and he’s on Facebook, Twitter and lots of other social media. He was recently named the 2014 AAJA-AARP Social Media Fellow.