Asians Have Always Embraced Technology Early, and So Should You 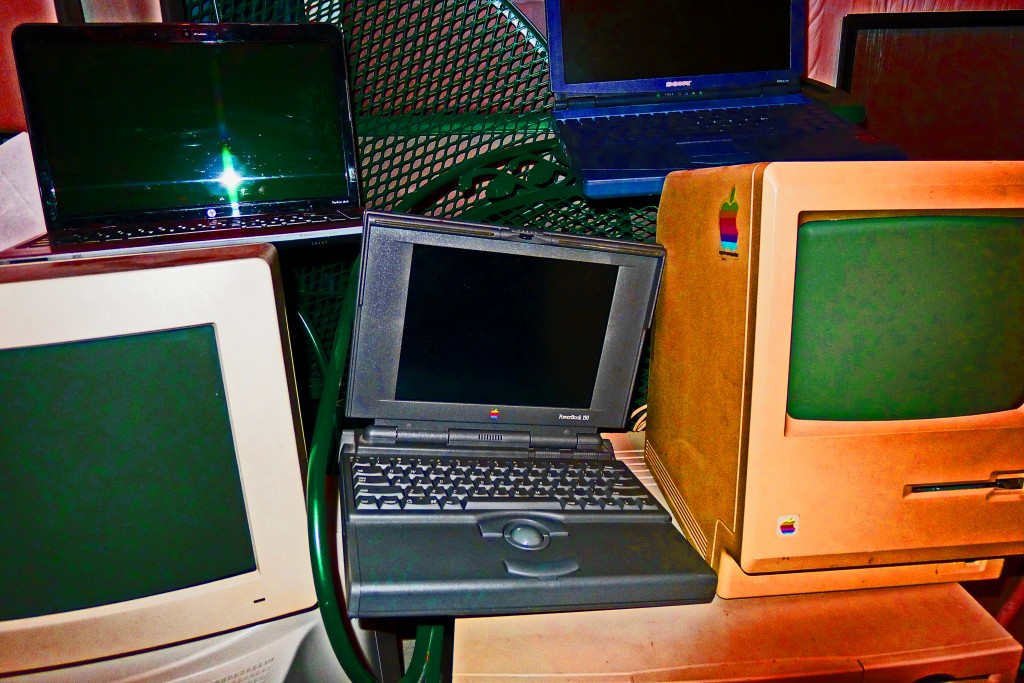 A sampling of Gil Asakawa’s old computers that are in his basement at home. Photo by Gil Asakawa

I make a living using technology, so maybe it’s not fair for me to say it, but I will anyway: We all should have computers and smartphones, and we should embrace technology, not be scared of it.

This is a mantra I’ve said for years, going back to the start of my career in the early 1980s. Back then, I was a journalist who typed on an IBM Selectric typewriter — anyone who’s a baby boomer or older remembers those — and I thought I was going to get my butt fired when the weekly newspaper I worked for went to a computer system. I didn’t think I could adapt. Or evolve. I thought the newfangled stuff would be too complicated, and I couldn’t learn it.

You know what? I did learn it. Not just because my job depended on it, but because I found I liked(ITAL) it!

The fact is, I’ve always been a gadget geek, since my childhood. It’s a stereotype, but maybe there’s some sociological reason for it: Asians (certainly Japanese) seem to have an affinity for high-tech stuff. Even today Japan leads the world in robotics, and one museum in that country just introduced robot docents who explain the exhibits and look eerily like human beings. Another Japanese robot senses, and displays, emotions. The sci-fi era of androids among us is not far off.

But that’s today. Back when I was a kid in Tokyo, I loved watching “Astro Boy” (Tetsuwan Atomu in Nihongo) and “Eighth Man” and “Gigantor,” all futuristic cartoons several decades ahead of anime’s popularity in the U.S. And as I grew older, I loved cameras, and radios, and hi-fi sound systems.

I survived the transition to computers. By the time the Internet became a consumer phenomenon in the mid-1990s, I was completely hooked, and every job I’ve had since then has been for an Internet company, or somehow related to digital media.

I’ve had a slew of computers, laptops, digital cameras, portable hard drives (I’m seriously addicted to hard drives of all sizes) and external batteries. I had an early “smart” phone that was sort of dumb, a Palm Treo. I’ve had half a dozen smartphones since then, and my wife can’t understand why I’m always dying to upgrade my phones.

Mottainai(ITAL), I know, to toss aside a perfectly good phone just because a new model is available.

All of which brings me to my current gig as the Asian American Journalists Assn.’s first-ever AARP Social Media Fellow. I post to AARP’s Facebook and Twitter accounts and write articles for AARP’s website to reach out to Asian Americans who are over 50 years old, because AARP is involved in so many issues that are related to this age group — not just elder care, health care and traditional Asian family issues, but for Asian American baby boomers who grew up in the 1950s, ’60s and ’70s, AARP is a veritable celebration of the coolness of our generation, because the last boomers are turning 50 this year.

So, I moderated a panel that AARP sponsored at the recent V3 conference of Asian American digital media in L.A. (see article this issue), and my panelists and I had a rousing and entertaining but hopefully thought-provoking conversation about having your Asian parents move in with you (and writing about it online), sharing stories about depression and suicide online and using social media and a documentary film to get the evangelical church to accept LGBT members.

These are serious issues, and because they concern Asian Americans, they’re too often missing from mainstream media. But within the Asian American blogosphere, they’re discussed far and wide, and they resonate among an admittedly young demographic of computer-savvy web surfers.

It doesn’t have to be so. I think even older Asian Americans, including many JACLers, have the capacity — and dare I say duty — to log on and get the hang of using computers. It’s the way the world now communicates, after all.

At the JACL convention, which is in a week as I write this, I’m moderating another panel sponsored by AARP’s AAPI Community team, this time featuring people like Jeff Yang, the Wall Street Journal(ITAL) columnist whose son is starring in the new ABC sitcom “Fresh Off the Boat.” Our community has kept up with news of this show for almost a year thanks to social media, and Yang’s savvy use of it. My other panelists include a diversity officer from CBS; a spokesperson for 18 Million Rising, a powerful Asian American Pacific Islander social activism website; and a former YouTube VP who was in charge of channel strategy during a time when Asian Americans became some of the most successful video producers online.

My goal is not to host a hands-on training program (something that AARP’s TEK group does very well for older folks, by the way). I want to show how much is going on in online media and how you can tap into the energy of the future — today.

You can’t stop the march of technology. Just keep up the best you can, and you’ll be introduced to a whole new world of knowledge and action. Remember, I thought I’d be fired when my newspaper switched to computers. But I’m still here!

Gil Asakawa is a member of the Pacific Citizen Editorial Board and the author of “Being Japanese American.” He blogs about Japanese and Asian American issues on his blog at www.nikkeiview.com, and he’s on Facebook, Twitter and lots of other social media. He was recently named the 2014 Asian American Journalists Assn. AARP Social Media Fellow.