Spc. Dennis M. Fujii and the late-SSgt. Edward N. Kaneshiro, both of Hawaii, are recognized during the July 5 White House ceremony.

WASHINGTON (AP) — President Joe Biden on July 5 bestowed the nation’s highest military honor to four Army soldiers for heroism during the Vietnam War, bravery that he said had not diminished even with the passage of time.

“It’s just astonishing when you hear what each of them have done,” said Biden. “They went far above and beyond the call of duty. It’s a phrase always used but … it takes on life when you see these men.”

Addressing the three living soldiers and relatives of Kaneshiro, who is deceased, the president said, “I’m proud to finally award our highest military recognition, the Medal of Honor, to each of you.”

Biden noted that more than 50 years had passed “since the jungles of Vietnam where, as young men, these soldiers first proved their mettle. But time has not diminished their astonishing bravery, their selflessness in putting the lives of others ahead of their own and the gratitude that we as a nation owe them.” 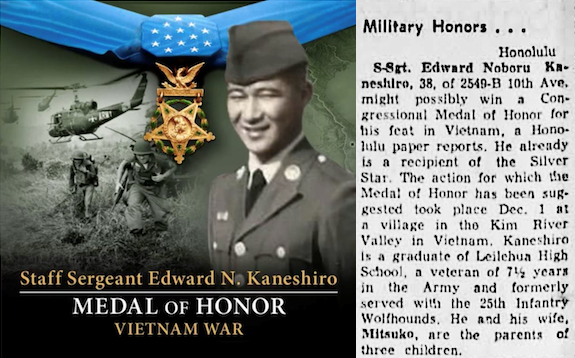 SSgt. Edward Kaneshiro, who was killed in the Vietnam War on Dec. 1, 1966, received the Medal of Honor from President Biden on July 5, 2022. In the Pacific Citizen article of Jan. 20, 1967 (above), it is noted that his actions more than half a century earlier were considered worthy of Medal of Honor recognition.

Kaneshiro, killed in action by hostile gunfire in Vietnam in 1967, received his honor posthumously for a Dec. 1, 1966, raid where his unit came under fire by North Vietnamese troops. His actions were credited with helping his unit withdraw from the village where they were fighting. Kaneshiro was born and raised in Hawaii, the son of Japanese immigrants.

Birdwell was honored for his actions helping to head off an assault and evacuate wounded at Tan Son Nhut Airbase near Saigon on Jan. 31, 1968.

Duffy was recognized for leading troops who came under ambush after their commander was killed in action.

Fujii received a Medal of Honor for actions over four days in Laos in February 1971 treating the wounded and directing air strikes against enemy positions after his air ambulance was forced to crash land. Staying behind to administer aid, it would be several days before he was airlifted to safety. Upon completion of his tour, he joined the Army Reserve; today, Fujii currently resides in Hawaii. 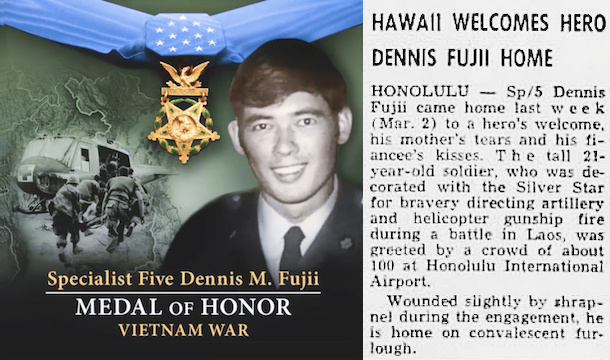 Spc. Dennis M. Fujii attended the July 5, 2022, White House ceremony at which he was awarded the Medal of Honor by President Biden for his actions and bravery during the Vietnam War. Above is an article from the March 12, 1967, Pacific Citizen about Fujii receiving a hero’s welcome upon his return home to Hawaii.

“Servicemembers like Mr. Fujii and Mr. Kaneshiro risk their lives to protect our nation, and we have an obligation to support them following their service,” U.S. Sen. Mazie Hirono (D-Hawaii) said in a statement.

According to an official White House statement, the Medal of Honor is “awarded to members of the armed forces who distinguish themselves conspicuously by gallantry and intrepidity at the risk of their own lives above and beyond the call of duty while engaged in an action against the enemy of the United States.”

Since its inception in the 1860s, more than 3,500 service members have been awarded the Medal of Honor.