One day after California Gov. Gavin Newsom declared Feb. 19 to be “A Day of Remembrance: Japanese American Evacuation,” the California Assembly made official an apology on behalf of the state for its historic role in discriminating against residents of Japanese ancestry before World War II (See Pacific Citizen, Feb. 7-20, 2020, issue). The vote was unanimous, 72-0.

HR 77, which was introduced by Assemblymember Albert Muratsuchi (D-Torrance) on Jan. 28, saw to it that the state legislature’s lower house apologized for California’s historic role in unfairly discriminating against California’s Japanese Americans and legal resident aliens of Japanese ancestry who were, along with Japanese Americans from other Pacific Coast states, unjustly forced to move from their homes, farms and businesses to 10 War Relocation Authority Centers and other detention camps as a result of President Franklin D. Roosevelt’s Executive Order 9066 on Feb. 19, 1942. 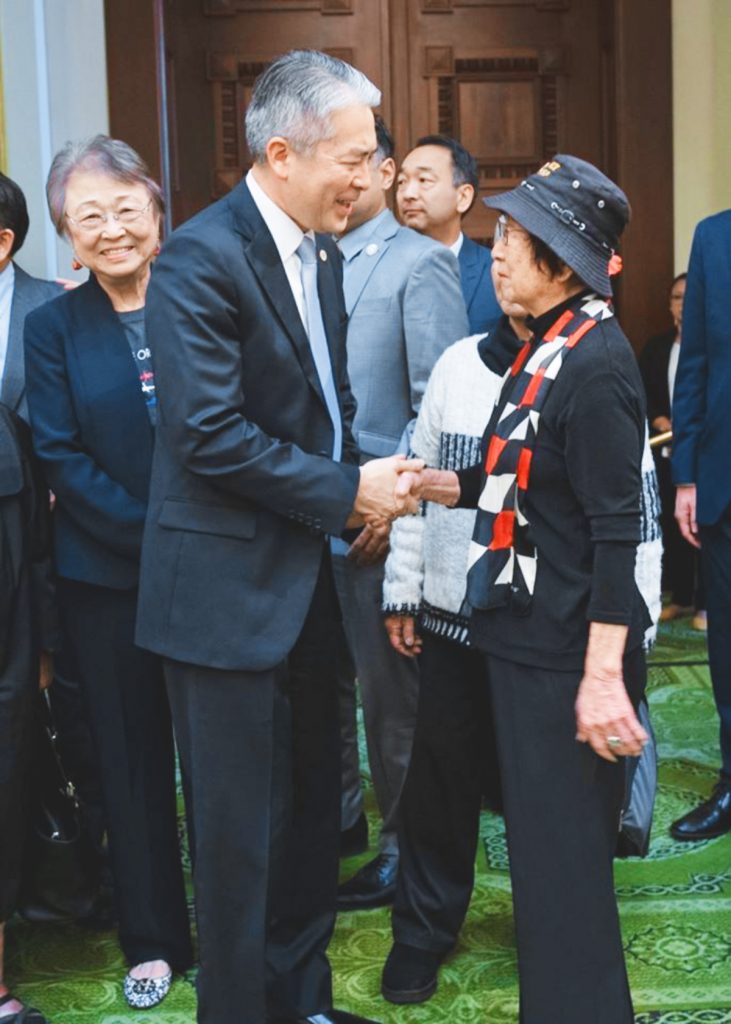 California Assemblyman Al Muratsuchi (D-Torrance) greets Kiyo Sato, 96, a USAF Nurse Corps veteran, at the Capitol on Feb. 20, the day the Assembly made an official apology.

While the federal government apologized for its role in the treatment of Japanese Americans — and issued $20,000 in token restitution to still-surviving victims — with the Civil Liberties Act of 1988, signed by President Ronald Reagan on Aug. 10, 1988, Muratsuchi was compelled to have California, which is home to the largest population of Japanese Americans in the U.S. mainland, revisit its own past and apologize.

In an interview with National Public Radio, Muratsuchi said, “We like to talk about how as California goes, so goes the nation. Unfortunately, during the years leading up to World War II, California was at the forefront and led the nation in so many ways in fanning the flames of racism and immigrant scapegoating against Japanese Americans. Specific actions that the Legislature took included passing the Alien Land Law of 1913.”

Amy Watanabe of the Mineta Legacy Project was present when HR 77 was approved, and in a Facebook post, she wrote, “It was a privilege to observe this historic moment in our state’s Capitol. I was moved by many of the Assemblymembers’ remarks that emphasized that HR 77 is not only an apology for our state’s mistakes and wrongdoings in the past, but is a reminder to never again let this happen and of the responsibility of the current Legislature to make sure future generations do not need to make an apology for their decisions/policies today.”

In related news, the governors of two other states that had camps that also detained Japanese Americans — Idaho and Arkansas — similarly proclaimed Days of Remembrance.

Issued on February 19, 1942, Executive Order 9066 authorized the forced evacuation and incarceration of thousands of loyal United States citizens because of their Japanese ancestry.

Over two and a half years, the U.S. government removed Japanese Americans from their homes on the West Coast — without a trial or due process — forcing them into concentration camps in unfamiliar lands. Uprooted from their lives and livelihoods, they endured miserable conditions and treatment by military guards.

Despite these experiences, thousands of young Japanese American men enlisted in the U.S. Armed Forces, bravely fighting to defend the nation that was abridging their own freedoms at home. We honor their sacrifice, as well as the resilience that made it possible for thousands of Japanese American families to reclaim and rebuild their lives after the war.

A decision motivated by discrimination and xenophobia, the internment of Japanese Americans was a betrayal of our most sacred values as a nation that we must never repeat. This stain on our history should remind us to always stand up for our fellow Americans, regardless of their national origin or immigration status, and protect the civil rights and liberties that we hold dear.

NOW THEREFORE I, GAVIN NEWSOM, Governor of the State of California, do hereby proclaim February 19, 2020, as “A Day of Remembrance: Japanese American Evacuation.”

IN WITNESS WHEREOF I have hereunto set my hand and caused the Great Seal of the State of California to be affixed this 19th day of February 2020.