Calif. State Assembly Apologizes to JAs for Past Injustices

LOS ANGELES — The California State Assembly has apologized for its past role in abetting the abrogation of constitutional and civil rights of Americans and legal permanent residents of Japanese ancestry before and during WWII. 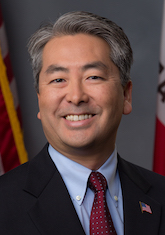 California State Assemblymember Albert Muratsuchi (D-Torrance) introduced HR 77 into the lower house on Jan. 28, just weeks before the 78th anniversary of President Roosevelt’s Feb. 19, 1942 Executive Order 9066 and the 37th anniversary of the report issued on Feb. 24, 1983 by the Commission on Wartime Relocation and Internment of Civilians.

“Every year during the years I’ve been in the California Legislature, I’ve introduced a resolution to commemorate the Day of Remembrance, that I know many communities across the country observe to remember the lessons of Executive Order 9066,” Muratsuchi told the Pacific Citizen.

“But this year I wanted to do something different and have California lead by example. While our nation’s capital is hopelessly divided along party lines and President Trump is putting immigrant families and children in cages, the California Legislature, with HR 77 will be issuing an official, bipartisan measure for its own actions taken that led to the incarceration of over 120,000 loyal Americans of Japanese ancestry behind barbed wire.”

In addition to acknowledging and apologizing for California’s role in the U.S.’ treatment of Japanese Americans during WWII, HR 77 also does the same for legislation that dates back to the state’s alien land laws of 1913 and 1920, which proscribed immigrant Asians — who were at the time ineligible to become naturalized U.S. citizens — from owning or leasing in the long-term land, especially for farming. Following California’s lead, many other states also enacted similar alien land laws until they were ruled unconstitutional in 1952.

Muratsuchi said the purpose of the resolution was to also educate all Americans on actions by “state leaders like California Gov. Hiram Johnson and Attorney General Earl Warren leading the calls for discriminatory laws and actions, and newspapers like the Los Angeles Times and the San Francisco Chronicle fanning the populist flames of anti-Japanese sentiment” while highlighting how in the present day “California leads the country in so many ways,” including by recognizing its past faults.

Weeks after the U.S. declared war on Japan following its attack on the then-territory of Hawaii’s Pearl Harbor naval base on Dec. 7, 1941, Roosevelt — at the recommendation of Army Gen. John L. DeWitt and others — issued E.O. 9066, which led to the forced removal, as well as voluntary evacuation, from the Pacific Coast of some 120,000 residents of Japanese ancestry. The bulk of that number, who were U.S. citizens, were subsequently incarcerated in several government-run camps, including 10 operated by the War Relocation Authority in remote areas of the nation.

Decades later, the report of the CWRIC, which investigated the government’s role in the treatment of American citizens and legal permanent residents of Japanese ancestry during WWII, concluded that what had occurred was the result of “race prejudice, war hysteria, and a failure of political leadership.”

HR 77 can be read in it entirety at https://tinyurl.com/qmcdwgl.