Seattle artist Tara Tamaribuchi’s art installations, inspired by the history of Japanese Americans who made camouflage nets for the U.S. Army during World War II, are on display in Seattle and Tacoma, respectively.

Two art installations from the series “Camouflage Net Project” by Seattle artist Tara Tamaribuchi are currently on display at the Northwest African American Museum in Seattle and the Pantages Theater in Tacoma, Wash.

The installation at the Pantages Theater, which is on display until July 15, is in the storefront windows on Ninth and Commerce streets and is presented by Spaceworks Tacoma and funded in part by Densho and the ArtsFund. 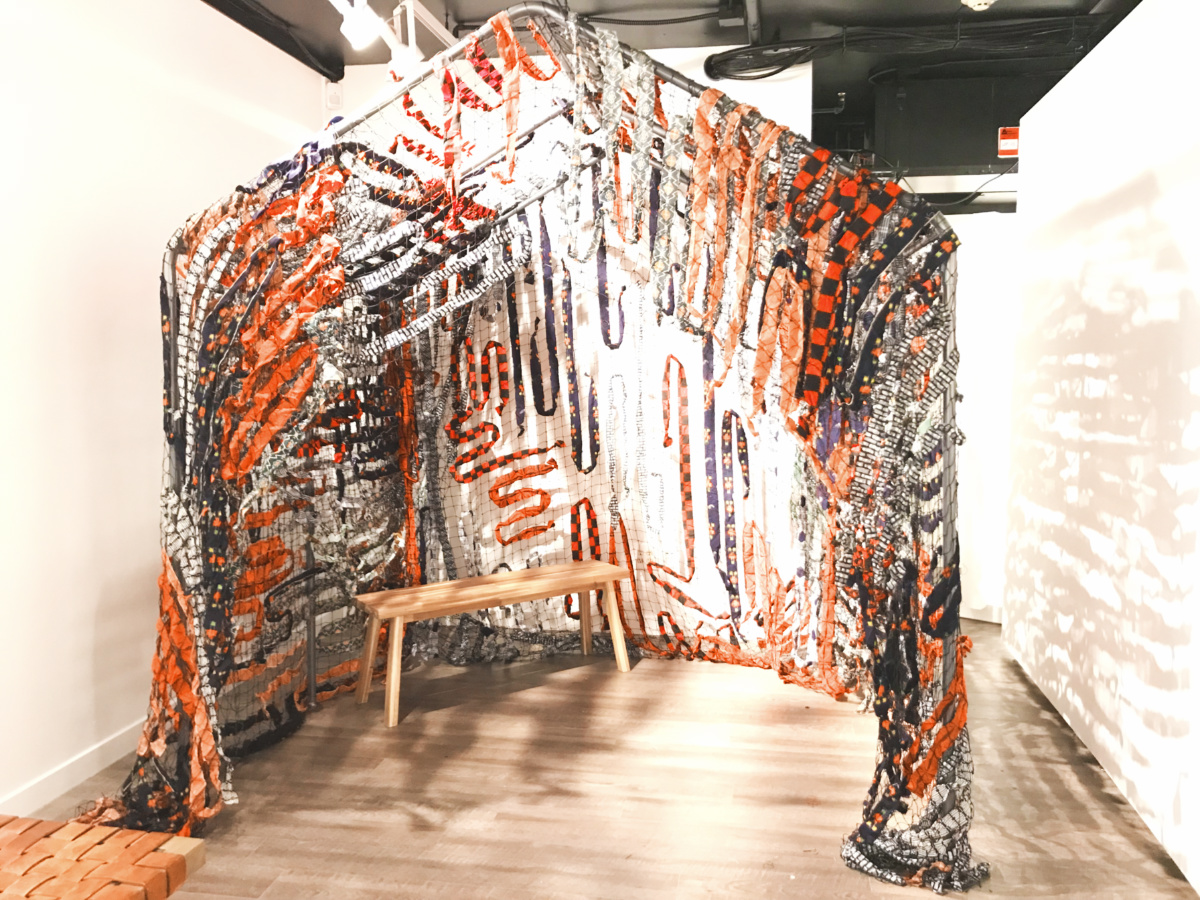 A current storefront installation at the Pantages Theater in Tacoma, Wash. The video installation with kimono fabric and netting is sponsored by Densho. (Photo: Tara Tamaribuchi)

The installation at the NWAA, which is on view until Aug. 28, is part of the group exhibition “Edwin T. Pratt: A Living Legacy,” which features several Pratt Fine Arts Center scholarship recipients honoring the work, life and spirit of the fallen Seattle-area civil rights leader.

The “Camouflage Net Project” features camouflage netting made with kimono fabric. The project was inspired by the history of the Japanese Americans who made camouflage nets for the U.S. Army, as prison labor,  during World War II.

Tamaribuchi was interested in connecting her handiwork to those who were wrongly incarcerated during the war, transcending time and place to show pride of heritage through the use of kimono fabric.

“I hope that when people experience these pieces, they learn about the Japanese American incarceration and see the connections with human rights issues of today,” said Tamaribuchi. “Doing this work has made me realize how interconnected our experience is with people outside of our community.”

The series began at the Seattle Center Sculpture Walk in 2017, in response to the Muslim Ban and the 75th anniversary of Executive Order 9066, which wrongly imprisoned Japanese Americans and those of Japanese descent living along the West Coast in American concentration camps during WWII.

“I was moved by Dorothea Lange’s photos of Niseis weaving the camouflage nets in Manzanar. I had been unaware of this kind of labor. As an artist who references the body and the working hand, I wanted to connect my hands to those who were working in the factory,” recalled Tamaribuchi. “I have gotten the sense over my life that my Obaachan held shame and trauma from living in Tule Lake for four years. When I weaved the kimono fabric, I thought of her, wishing to weave away her shame and trauma. I believe we can harness powers in the magnificence of our ancestral culture.”

Tamaribuchi made a camouflage net that tented the underside of a glass walkway to act as a visual filter through which all people are protected and seen as interconnected.

Tamaribuchi chose to include fabric from one of her childhood kimonos into the net to underline the issue of child incarceration in American concentration camps during WWII and today.

The installation in the Edwin T. Pratt exhibition features the original camouflage net from the Seattle Center, draped over a tentlike structure. Inside the tent, a sound installation features the oral histories of Japanese American internment camp survivors who made the nets, as well as Dennis Baumbauer, who is half-Japanese and half-white. He was taken from an orphanage in Los Angeles and imprisoned at the Manzanar Relocation Center for being half-Japanese.

The sound installation exhibits also feature the oral histories of Fumi Hayashi, Yoshimi Matsuura, Sam H. Ono and Kaz Yamamoto. All of the oral histories were downloaded from the Densho website. In addition, historical documentation presented in the slide show is also from Densho.

For more information about the  “Camouflage Net Project,” visit www.tara tamaribuchi.com.