Carrying On and Moving Forward

The JACL National Convention’s Legacy Luncheon awards eight chapter projects with 2019 grants and a fireside chat talks about how people today can still make a difference.

Using our voices to relay stories of strength, hope and solidarity was the primary message conveyed to attendees of this year’s Legacy Luncheon during the 2019 JACL National Convention on Aug. 2 at the Little America Hotel in Salt Lake City.

This year’s event, emceed by Sarah Baker, president of Seattle JACL and National JACL VP of public affairs, and Kurt Ikeda, chair of the JACL Young Professionals Caucus and education manager of the Oregon Nikkei Endowment, recognized the 2019 Legacy Fund grant recipients, as well as featured a fireside chat with Hon. Sec. Norman Mineta and psychotherapist/co-organizer of Tsuru for Solidarity’s Satsuki Ina and moderated by BuzzFeed’s Sean Miura.

Barton went on to show appreciation for the internees who contributed their redress monies to establish the JACL Legacy Fund endowment and grants program in 1990.

“Today’s grant recipients carry forward the legacy of these original visionaries,” she said.

Following are this year’s grant awardees:

Comcast’s Johnnie Giles then introduced the luncheon’s fireside chat participants, who began their conversation following a video presentation featured on Democracy Now! that showed Japanese Americans, among them Ina, protesting the unjust incarceration of immigrants at Fort Sill near Lawton, Okla.

Ina, who was born in the Tule Lake Segregation Center and is now a private-practice psychotherapist specializing in collective trauma, detailed Tsuru for Solidarity’s participation along with Buddhist priests at Fort Sill on July 20.

“Four days after this large protest of 500, it was announced that Fort Sill would not be housing the 1,400 children that was anticipated,” Ina declared proudly.

Miura then spoke about the importance of telling our stories and asked Mineta to talk about what drove his decision to enter politics. 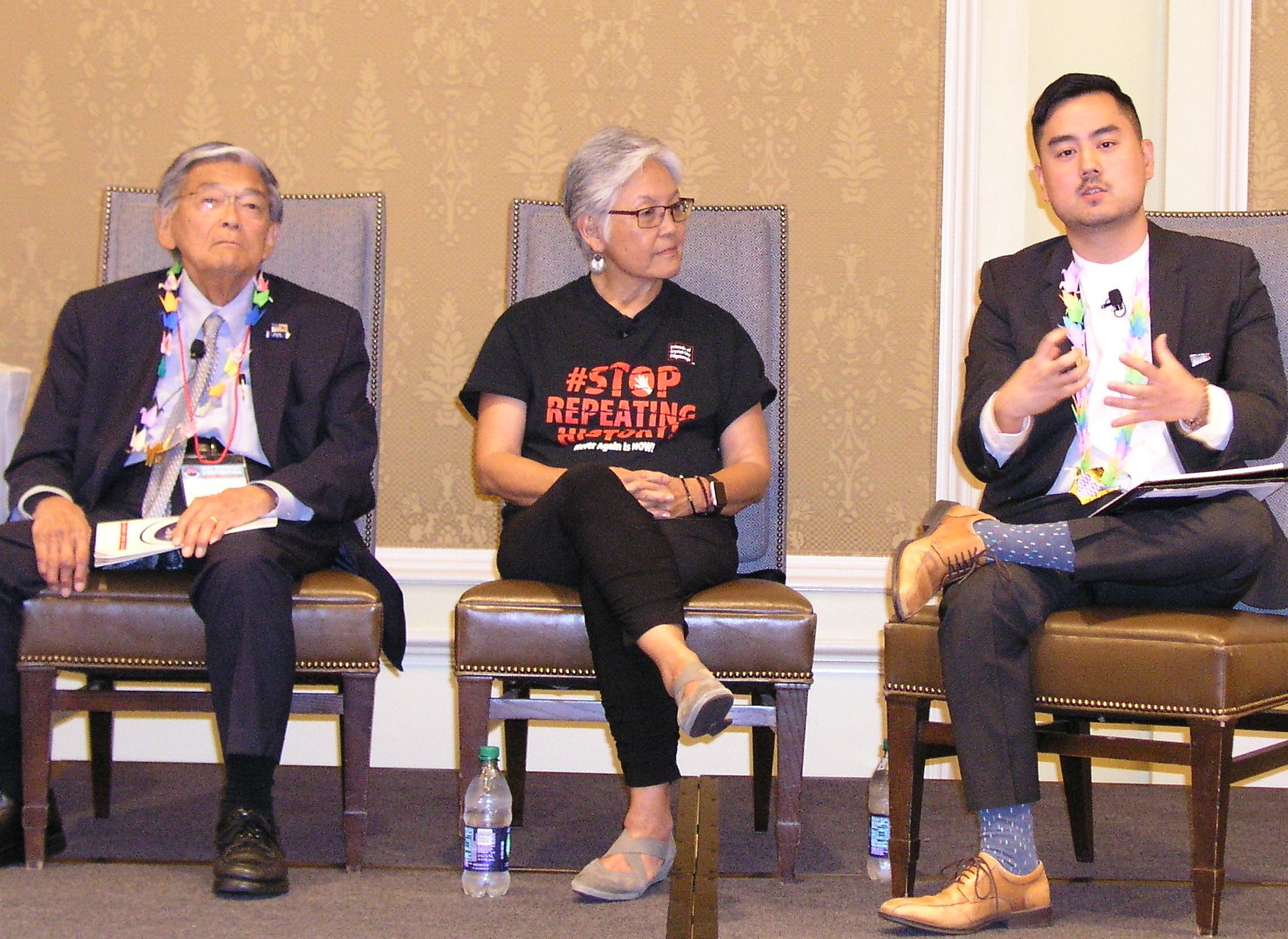 Mineta eventually went on to become the first Japanese American mayor of a major U.S. city, then was elected to Congress and went on to serve as Cabinet Secretary of Commerce and Transportation to two sitting U.S. presidents; he also played a key role in the fight for redress.

Ina, who has also produced two documentary films about the long-term impact of the Japanese American incarceration, spoke about her efforts to speak up on behalf of those who have no voices.

“When you are doing something for the common good, you are inspired to help and protect others,” she said. “Our goal is to not just be our little group (Tsuru for Solidarity) showing up at these individual actions but to have a voice to call on all Japanese Americans across the country to join us in protest. … It’s the perfect time.”

Miura then went on to talk about finding that common ground today and the important role people everywhere can play to make a statement and take action.

“We have to get people at the table where those decisions are being made to make sure it’s not going the wrong way,” said Mineta.  “… I want all of you to pursue your career goals, but say, Mr. Mayor, Mr. Governor,  Madame President, please appoint me.”

In May 2020, Tsuru for Solidarity is taking 100,000 folded origami cranes to Washington, D.C., and taking meetings with legislators.

“Those people (Congress) work there for us. And the way we have our voice is to show up and do all levels of the work that we are talking about. Those people work for us,” said Ina.

A solid sign JACL is making a difference today?

When Mineta asked the luncheon audience who has met their member in Congress to raise their hands, more than 50 percent firmly raised their hands up high for all to see.