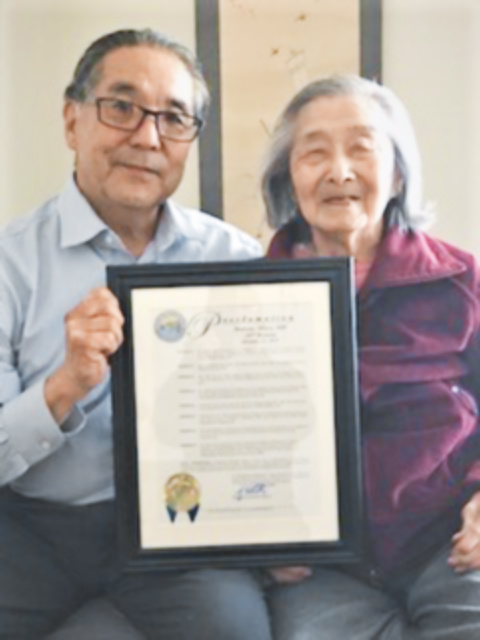 Dr. Masako Miura with her son, Hans Goto, and the proclamation given to her by the City Council of Watsonville, Calif. (Photo: Sandra Goto)

The City Council of Watsonville, Calif., honored Dr. Masako Miura, 105, with an official proclamation on Oct. 22 to celebrate her birthday and honor her lifetime work as a physician and U.S. government civil servant.

Signed by Watsonville Mayor Francisco Estrada, the proclamation was presented to Miura’s son, Hans Goto, during a ceremony that also included a speech by Watsonville-Santa Cruz JACLer Mas Hashimoto.

Miura, who also is a longtime member of the JACL Watsonville-Santa Cruz chapter, was unable to attend the evening ceremony but was presented with her proclamation the next day by her son.

Hashimoto went on to describe how Dr. Masako Miura, along with her then-husband, Dr. James Goto, protected JACLer Masaru Fred Tayama in December 1942 by hiding him in Manzanar at the “hospital,” sandwiched between two mattresses, in order to keep him safe from a pro-Japan group who was threatening him with bodily harm.

As a result of their heroic actions, the Gotos were removed from Manzanar and sent to Topaz, Utah, in order to protect them, too, from violence by the pro-Japan group.

At the conclusion of the war, Dr. Miura went on to work at Los Angeles County General Hospital, as well as the Los Angeles City School District and then from 1955 until her retirement in 1981, served as a civil service physician in the U.S. Army hospitals in Oakland and later Fort Ord (Monterey) for soldiers, veterans, retirees and their dependents.