In fall 2021, Assemblyman Al Muratsuchi (D-Calif.) secured $5 million in funds to build a World War II Camp Wall memorial in Torrance, Calif. For years, Kanji Sahara of Torrance had a vision of a memorial, complete with walls of black granite, that would honor those who were unjustly incarcerated during WWII.

Sahara dreamt of a wall for each of the 10 WRA incarceration camps, one inscribed with the names of each person forcibly held there, which includes 120,000 names. Now, that dream is becoming a reality. 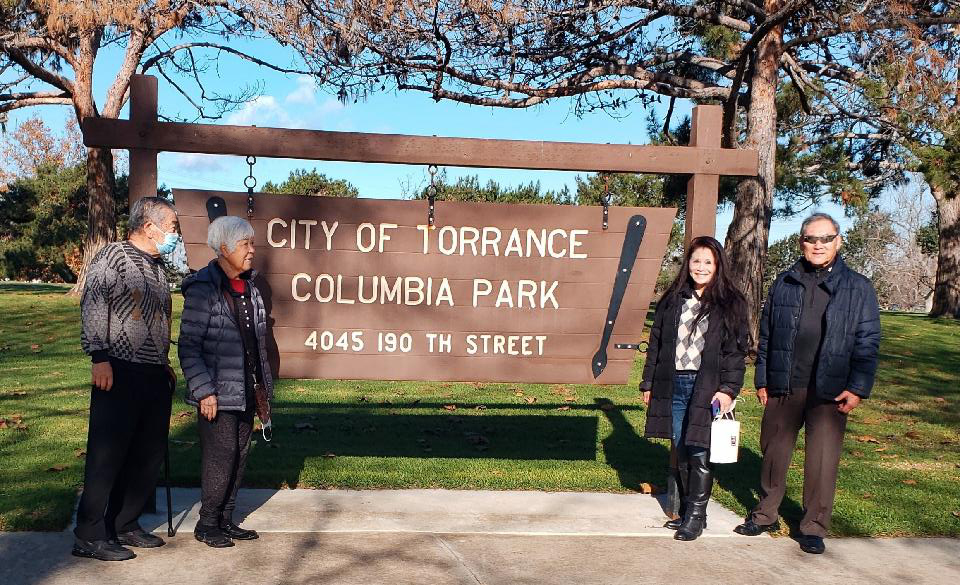 Members of the WWII Camp Wall Committee met with Paul Saito of Saito Associates-Landscape Architects on Dec. 27, 2021, at Columbia Park in Torrance, Calif. Columbia Park is the proposed location for the memorial.

Saito is the original designer of the 52-acre Columbia Park, which was built in 1983; it underwent a redesign overseen by Saito in 1984. In 1985, the California Landscape Contractors Assn awarded him with an achievement award for the design and installation of Columbia Park.

Saito now calls Fresno home and is noted there for development of the Shinzen Friendship Garden. He also designed the Fresno Assembly Center Memorial at the Fresno Fairgrounds and Remembrance Plaza at the Pinedale Assembly Center, where people of Japanese ancestry were incarcerated before being transferred to permanent incarceration camps.

He is very familiar with the camp experience, having been sent himself to the Santa Anita Assembly Center, then to the Rohwer War Relocation Center following the issuance of Executive Order 9066 by President Franklin D. Roosevelt on Feb. 19, 1942.

When the Camp Wall Committee contacted Saito, he was eager to volunteer his services and work with the current architect, Gregg Maedo of Gregg Maedo + Associates, and Maedo’s proposed memorial design.

Saito stopped by the park after visiting his daughter in Long Beach to see Columbia Park after more than 35 years.

“It’s much bigger than I remember it,” was Saito’s reaction.

The Camp Wall Committee is currently working on bringing its project full circle for Saito. He will be working on more detailed memorial design concepts, and it’s the committee’s hope to have him one day landscape the memorial grounds.

The memorial’s projected location will be on the southeast corner of the park, which allows for high visibility from traffic on two main thoroughfares in Torrance. The park is aesthetically Japanese in style; currently, a piece of artwork, “Fujimihara,” is located on this corner — it will be moved to another location in the city once the memorial is erected. In addition, the sidewalks on this corner are lined with cherry blossom trees, planted there by the local Soka Gakkai group. The city’s annual Torrance Cherry Blossom Festival is also held at Columbia Park.

For more information on the memorial wall and the Camp Wall Committee, email WWIIcampWall@gmail.com.