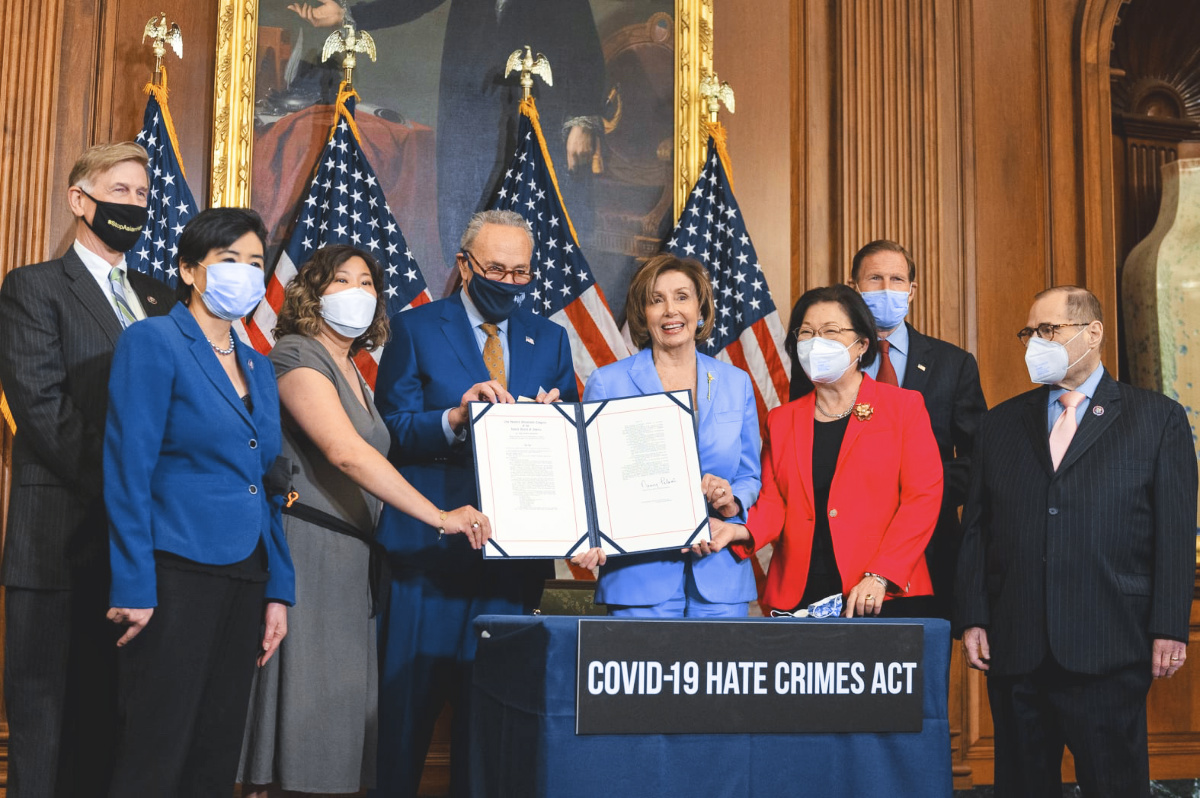 President Biden also officially signs the bill that will expedite the review of hate crimes at the Justice Department and offer grants to law enforcement to improve the reporting of incidents.

WASHINGTON (AP) — Congress approved legislation May 18 intended to curtail a striking rise in hate crimes against Asian Americans and Pacific Islanders, sending President Joe Biden a bipartisan denunciation of the spate of brutal attacks that have proliferated during the coronavirus pandemic.

The bill, which the House passed on a 364-62 vote, will expedite the review of hate crimes at the Justice Department and make grants available to help local law enforcement agencies improve their investigation, identification and reporting of incidents driven by bias, which often go underreported. It previously passed the Senate 94-1 in April after lawmakers reached a compromise. Biden officially signed the bill on May 20.

“Asian Americans have been screaming out for help, and the House and Senate and President Biden have clearly heard our pleas,” said Rep. Grace Meng (D-N.Y.), who helped lead efforts to pass the bill in the House.

To many Asian Americans, the pandemic has invigorated deep-seated biases that, in some cases, date back to the Chinese Exclusion Act of more than a century ago. President Donald Trump repeatedly referred to the virus, which emerged in Wuhan, China, as the “China Virus” or the “Kung Flu.” And as cases of the illness began to rise in the U.S., so, too, did the attacks, with thousands of violent incidents reported in the past year.

Rep. Judy Chu (D-Calif.) said it’s painful for many to “open up the newspaper every day and see that yet another Asian American has been assaulted, attacked and even killed.”

In February, an 84-year-old man died after he was pushed to the ground near his home in San Francisco. A young family was injured in a Texas grocery store attack last year. And in Georgia, six Asian women were killed in March during a series of shootings targeting workers at massage parlors. Prosecutors are seeking hate crimes charges. The women who were killed are mentioned in the text of the bill.

Yet, to some activists, including organizations representing gay and transgender Asian Americans, the legislation is misguided. More than 100 groups have signed onto a statement opposing the bill for relying too heavily on law enforcement while providing too little funding to address the underlying issues driving a rise in hate crimes.

“We have had hate crimes laws since 1968, it’s been expanded over and over again, and this new legislation is more of the same,” said Jason Wu, who is co-chair of GAPIMNY-Empowering Queer and Trans Asian Pacific Islanders. “These issues are about bias, but also rooted in inequality and lack of investment and resources for our communities. Not a shortage of police and jails.”

Meng acknowledged some of the concerns raised by the groups but countered that the widespread underreporting of hate crimes needs to be addressed.

“Law enforcement is currently underreporting these kinds of incidents and it makes it easy to ignore hate crimes all together,” she said.

Rep. Jim Jordan, an Ohio Republican, suggested that the surge in Asian American violence was tied to efforts backed by some Democrats and other progressives to decrease funding for the police.

“This violence, by and large, is happening in Democrat-controlled cities,” said Jordan. If “money wasn’t taken from police and they were allowed to do their jobs, they would probably be in an entirely different position.”

Yet, the bill also represented a rare moment of bipartisanship in a Congress that has struggled to overcome partisan gridlock, while underscoring an evolution in Republican thought on hate crimes legislation.

Many conservatives have historically dismissed hate crime laws, arguing they create special protected classes so that victims of similar crimes are treated differently.

“I’m glad Congress is coming together in a bipartisan way,” said Rep. Young Kim, a California Republican who is Korean American. “Let’s also recognize that we cannot legislate hate out of our people’s hearts and minds.”

Speaking earlier in the day, Senate Majority Leader Chuck Schumer said passage of the bill sends a “powerful message of solidarity” to those who have suffered discrimination during the pandemic.

“Discrimination against Asian Americans is, sadly, not a new phenomenon in our nation’s history, but the pandemic brought old biases and prejudices back to the foreground,” the New York Democrat said. “The Senate can be proud it took the lead.”