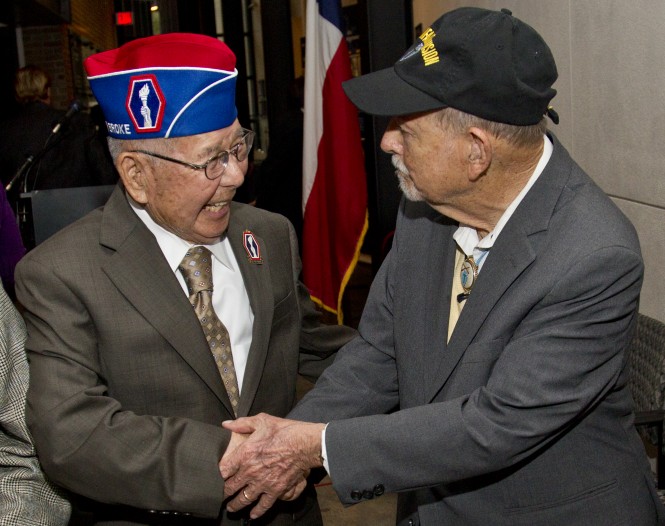 The Smithsonian’s Congressional Gold Medal traveling exhibit made its final stop in Houston, Texas, after a year of crisscrossing the United States.

The seven-city traveling exhibit “American Heroes: Japanese American World War II Nisei Soldiers and the Congressional Gold Medal” was organized by the Smithsonian and the National Veterans Network to honor Japanese Americans who served heroically in the 442nd Regimental Combat Team, the 100th Battalion and the Military Intelligence Service.

The creation of the exhibit — which highlights Japanese cultural values of courage, respect, humility, perseverance, compassion and citizenship — came after Nisei WWII veterans were awarded the Congressional Gold Medal in late 2011. The exhibit includes the medal and educational materials such as an iPad application and curriculum.

“The legacy of the men — living and deceased — whom we honor here today is a heritage of patriotism as old as the American Revolution and as new as the frontlines of freedom in Afghanistan. Their accomplishments are a uniquely American story that, thanks to the Smithsonian Institution, will be told and retold for generations to come,” said Gen. Eric. K. Shinseki, secretary of theU.S. Department of Veterans Affairs, at the Dec. 19 opening ceremony. 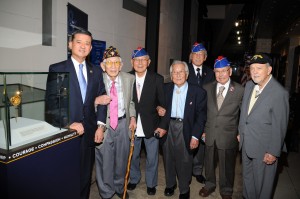 “American Heroes” leaves the Holocaust Museum on Jan. 26 and will be featured on permanent display at the National Museum of American History in Washington, D.C.

“We look forward to the opening of the Congressional Gold Medal exhibit at the Smithsonian National Museum of American History on Feb. 19 and our partnership with the Smithsonian Asian Pacific American Center to develop a digital exhibit that will interpret and bring to life the stories of the Japanese American WWII veterans,” said NVN Chairwoman Christine Sato-Yamazaki in a press release.