One of the privileges of working on the staff of the JACL was meeting inspiring and important people. One such person was Congressman John Lewis, a civil rights icon. It was with sadness that we heard that Lewis passed away of pancreatic cancer. He did not want to give up, but he lost the battle on July 17 at the age of 80. He had served as a U.S. Congressman for his home state of Georgia since 1987. 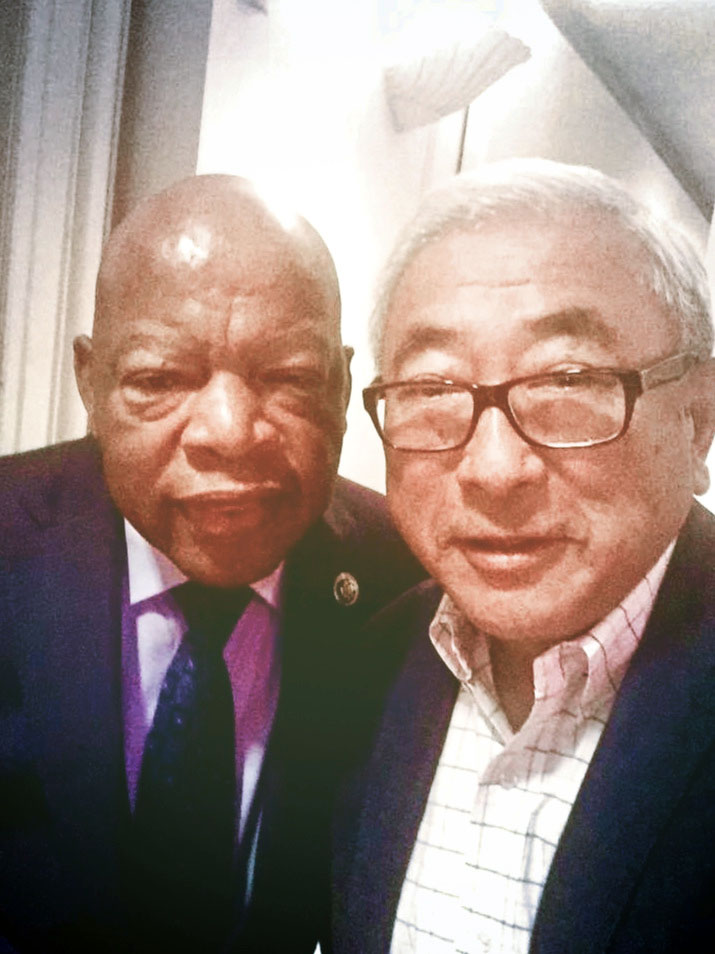 Lewis was a college student studying to be a pastor in the early 1960s. Having been born in Georgia, he had gone to segregated schools and experienced racism. At 18, he was inspired by Dr. Martin Luther King Jr. and the work he was doing for civil rights. He wrote to Dr. King. They met, and Lewis became engaged in the Civil Rights Movement.

The Freedom Riders were a group of which Lewis was a member at the age of 21. These 12 people, five of whom were Black, would ride buses together through the segregated South. They challenged the region’s lack of enforcement of a Supreme Court ruling that deemed segregated public bus rides unconstitutional. These young activists often were beaten or arrested. In one of his last tweets before his passing, Lewis reported on the 59th anniversary of his release from jail after being arrested in Jackson, Miss., for using a white restroom during a Freedom Ride.

In 1963, Lewis was elected chairman of the Student Nonviolent Coordinating Committee, an organization he helped found. He was invited to speak at the March on Washington in 1963 when Dr. King gave his famous “I Have a Dream” speech. Lewis was the youngest speaker that day and the last remaining.

As a student at Fisk University, Lewis wasted no time organizing and quickly found himself on the front lines of the civil rights movement. He led numerous demonstrations in Nashville against racial segregation, including sit-ins at segregated lunch counters.

Lewis was one of the leaders of the march in Selma, Miss., across the Edmund Pettus Bridge to Montgomery, Ala., on March 7, 1965. They were marching for voting rights and equality. After Alabama State police troopers in riot gear met the group at the other side, many of the demonstrators were beaten. Lewis had his skull fractured as a police officer beat him brutally. The event became known as “Bloody Sunday.” It is portrayed in the 2014 film “Selma.”

Lewis attended a pilgrimage every year to honor those who marched that day in 1965. He was a key figure in the march’s 50-year anniversary commemoration. Amy Watanabe worked with me on organizing a group of Asian Americans and Pacific Islanders who went from Washington, D.C., to join in the march to show our support for the fight for civil rights. These mostly young AAPI leaders are now diligently continuing the work for civil rights and equality.

Also present at that commemoration were members of Congress, including Congressman Mark Takai of Hawaii. Congressman Takai had leis sent over from Hawaii to present to major participants of that event. He was an up-and-coming leader within the Japanese American community, but he sadly lost his life also to pancreatic cancer at the young age of 49 in 2016. Takai is greatly missed, as will be Congressman Lewis. It was a distinct honor to know these two fine gentlemen and call them friends.

Lewis passed away seven months after a routine medical visit revealed that he had stage 4 pancreatic cancer. He made a statement at that time:

“So I have decided to do what I know to do and do what I have always done: I am going to fight it and keep fighting for the Beloved Community. We still have many bridges to cross.”

“He loved this country so much that he risked his life and his blood so that it might live up to its promise,” President Barack Obama said in a statement. “And through the decades, he not only gave all of himself to the cause of freedom and justice, but inspired generations that followed to try to live up to his example.”

Lewis acted as a symbol of the civil rights movement and advocated for what he liked to call “good trouble” for more than 30 years while serving in the U.S. House of Representatives. He considered the peaceful protests to bring attention to police brutality against Black men after the killing of George Floyd as “good trouble.” He was known as the “Conscience of the U.S. Congress” and was a brave advocate for justice and equality.

A lot of progress has been made over the past 60 years that Lewis has been working for civil rights, but there are still bridges to cross, as he said. Unfortunately, racism has not ended. The fight must go on, and we need to do our part to bring more justice to the world.