The surprising commercial and critical success of the 2018 feature film “Crazy Rich Asians” was a milestone for Hollywood and its baggage-laden history of warped depictions of Asian Americans and Asians — and it proved to be a breakthrough for its director, Jon M. Chu.

Now, the convergence of May’s Asian Pacific American Heritage Month with the lingering stay-at-home protocols used to combat the COVID-19 pandemic means it’s still a good time to catch up with some movies that have an Asian American connection, especially now that the PBS docuseries “Asian Americans” (P.C., April 24-May 7, 2020 https://www.pacificcitizen.org/pbs-asian-americans-is-a-binge-worthy-gift-in-trying-times/) has already aired.

With that in mind, Chu and on-demand streaming service FandangoNOW have teamed to list some of his watch-at-home picks from Asian American auteurs. Chu’s list includes personal essays expounding on what each choice means to him. The movies on his list, followed by its director, are:

All can be viewed for a fee at FandangoNOW, with the exception of “Tigertail,” which requires a Netflix subscription. Trailers and Chu’s comments for the pics on his list can be view at https://tinyurl.com/y855au24.

Supplementing that list in no particular order are some additional streaming choices worthy of consideration. 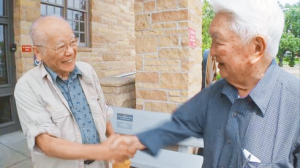 “The Registry’s” Seiki Oshiro and Grant Ichikawa meet in person.

‘The Registry’ — This documentary, directed by Bill Kubota and Steve Ozone, tells the story of a pair of Army MIS veterans — Seiki Oshiro and Grant Ichikawa — who collaborated via the Internet to compile a comprehensive list of fellow MISers. (Note: The following link https://www.pbs.org/video/the-registry-x3ilor/ — expires on May 29.)

‘Never Give Up! Minoru Yasui and the Fight for Justice’ — Co-directed by Will Doolittle and one of Min Yasui’s daughters, Holly Yasui, this documentary is the story of one of the four Nisei whose legal challenges to the WWII evacuation and incarceration of Japanese Americans reached the Supreme Court. (Pay to view at https://vimeo.com/ondemand/nevergiveup)

‘Picture Bride’ — Written and directed by the late Kayo Hatta, this is a story based on the early Japanese immigrant phenomenon of Issei men and women who met — and married — via correspondence and photographs. Stars Yuki Kudo, Tamlyn Tomita and Toshiro Mifune. (Pay to view at Amazon Prime Video, Apple TV+)

‘American Pastime’ — This baseball drama, set in a Japanese American concentration camp, was directed by Desmond Nakano, who shares a writing credit with Tony Kayden. (Pay to view at Amazon Prime Video, Apple TV+ and FandangoNOW)

‘The Killing of a Chinese Cookie’ — An exposé of sorts, directed by Derek Shimoda, about an only-in-America story behind the staple of Chinese restaurants (in America, that is): the fortune cookie. (Pay to view at Amazon Prime Video)

‘Days of Waiting,’ ‘Unfinished Business,’ ‘The Mushroom Club’ and ‘Mifune: The Last Samurai’ — All from documentarian Steven Okazaki, the first three are available at https://vimeo.com/farallonfilms. “Days of Waiting” won an Oscar, and “Unfinished Business” was Oscar-nominated; both are pay to view, while “Mushroom Club” is free. “Mifune: The Last Samurai” is pay-to-view on Amazon Prime Video.

‘Toyo Miyatake: Infinite Shades of Grey’ and ‘Manzanar’ — From Robert Nakamura, the “godfather of Asian American media,” both documentaries and two more are free to view at https://tinyurl.com/yc7cv48m.

‘The Manzanar Fishing Club’ — The Corey Shiozaki documentary, the title of which reveals its subject matter, can’t be streamed yet — but is purported to be available at an undeteremined future date as a streaming rental or digital download from Amazon Prime Video.