David Inoue: Ready to Roll in a New Role

JACL’s new executive director plans to revitalize the 88-year-old organization from the ground up. 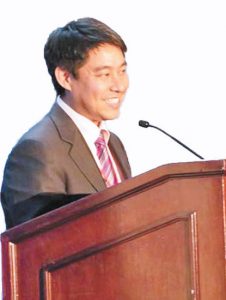 Years before David Inoue had any inkling about applying for the vacant position of JACL executive director, he worked full-time for a year at a sushi bar in Columbus, Ohio, as a sushi chef.

“It was a place my dad said was the best sushi restaurant in Columbus,” Inoue said. “He’s Japanese, so I trusted his opinion.”

This was while Inoue was doing post-graduate studies at Ohio State.

“I went up to the owner and said I was looking for a job — waiter, dishwasher, whatever. I just needed some extra money.”

Not far away was the Honda plant in Marysville, and there was a decent-sized Japanese population.

The owner asked him, “Do you speak Japanese?” Inoue answered a little, and the owner told him he was putting him behind the sushi bar. After being shown the basics, Inoue started with kappa maki, then nigiri, then ebi.

“He just had me making one nigiri after another until I got the feel for it,” Inoue recalled.

It was a combination of on-the-job training, trial by fire and performance art — but Inoue got the hang of it pretty quickly. He had to.

While that won’t necessarily be the same scenario as Inoue steps into the executive director role, vacant for more than a year, that prior experience of learning the ropes on the fly may come in handy as he hit the ground running the Monday right after the July 6-9 JACL National Convention in Washington, D.C.

One of his first priorities, however, will be getting his office in order.

“I was in there the other day, and the office is in serious need of cleaning,” Inoue said, noting that it had been sitting unused for the past year.

But once the housekeeping is in order, Inoue said his priorities will be getting to know the staff and their strengths, how they may want to develop their skills — and making connections outside the organization.

“I’m here in Washington, and a lot of our work is done through coalitions and partnerships, so it’s going to be making those connections with our partner organizations,” he said.

Another priority for Inoue is the ever-present need to keep JACL fiscally sound.

“The situation is all the more dire now since we haven’t had an executive director for more than a year now,” he said. “I think that by not having someone in the position for a year has left the organization, to be honest, kind of floundering.”

Inoue said that as executive director, he not only needs to set an agenda for advocacy as a civil rights organization, but also manage a nonprofit organization that is understaffed while getting the most out of the current staff without causing burnout.

In his remarks, Inoue also referenced Resolution 4, which passed during the convention’s National Council meeting to find a new Midwest JACL regional director with the March retirement of Bill Yoshino, who held the post for nearly four decades.

“Obviously, we have a hiring freeze right now,” Inoue noted, but when the status quo allows it, he will be in charge of identifying the right candidates and making the hire.

As for any new, out-of-the-box fundraising ideas he may want to implement, Inoue said he first wants to determine “exactly what we are doing.” He referred to fundraising software JACL is using that he said was “antiquated, to say the least.”

“Are we better off sticking with what we have or is there a cheaper solution that is also more efficient?” he mused, weighing the cost for new software vs. the return on investment for JACL members.

On the personal front, Inoue, 45, was born in Fort Wayne, Ind., and grew up near Chicago and Cincinnati.

A JACL member for more than 16 years, he has previous experience in the nonprofit sector that includes a 10-year stint at Christ House as administrative director, the National Association of Public Hospitals and Health Systems as director of grassroots and government relations and at the Centers for Medicare and Medicaid Services as a social science research analyst.

He is married, and he and his wife, Kaori, are raising two children.

One change is the amount of travel that will be necessary as executive director, not to mention attendance at evening events.

For instance, in the run-up to and during the convention, his time was taken up with JACL matters.

“I’ve seen my kids off and on, but I haven’t spent as much time with them as I typically do,” Inoue said.

But, if Inoue’s work experience — including sushi making — is any indication, he will be able to roll with the changes and see his family while getting done the work of JACL.