Day of Remembrance is a national observance that has been commemorated on or near Feb. 19 when, in 1942, President Franklin D. Roosevelt signed Executive Order 9066, which led to the incarceration of more than 120,000 people of Japanese descent. Organizations observed this day with various presentations across the country. 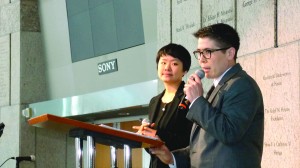 (From left) PSW’s Traci Ishigo and Riku Matsuda of the L.A. County Commission on Human Relations and host on KPFA-FM. Photo by Nancy Takayama

LOS ANGELES— Former incarcerees were asked to stand and be acknowledged during the Los Angeles DOR
program, held Feb. 15 at the Japanese American National Museum in Little Tokyo. Wearing name tags similar to the
ones they wore when they were rounded up during World War II, each internee stood when the name of the camp in
which they were held was read aloud. A moment of silence was also held for those internees who have passed away.
Serving as the event’s emcees were Traci Ishigo of JACL’s PSW District and Riku Matsuda of the L.A. County
Commission on Human Relations and host of “Flip the Script” on KPFA-FM. Also in attendance were California
Assemblymember Al Muratsuchi (D-Torrance), who announced that he and Assemblymember Mariko Yamada
(D-Davis) plan to introduce a DOR resolution “so that the entire state of California will remember the tragedy that
followed President Roosevelt’s signing of E.O. 9066.” Event sponsors included JANM, JACL PSW, the Manzanar
Committee and Nikkei for Civil Rights and Redress. 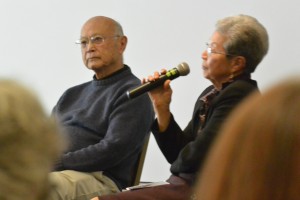 DENVER — Feb. 19 is commemorated each year within the Japanese American community nationwide as a Day of Remembrance, the date in 1942 that paved the way for the incarceration of 110,000 people of Japanese ancestry during World War II.

This year’s Mile High JACL program was held on Feb. 16 at the History Colorado Center. More than 200 people, many of whom were not Japanese American, attended the DOR event. In the museum’s adjacent auditorium, photos of life in Amache, Colorado’s internment camp, were shown on a large screen. The photos were donated to Denver University’s archeology department, which has an ongoing project digging artifacts from Amache.

Among the guests in attendance was Thornton resident George “Joe” Sakato, a veteran of the famed 442nd Regimental Combat Team and recipient of the Congressional Medal of Honor, who was recently honored by having his image featured in a U.S. postage stamp.

Mile High JACL board member Mark Shimoda, who organized the DOR event, welcomed the audience and introduced keynote speaker Patty Limerick, a professor of history and faculty director and chair of the board of the Center of the American West at the University of Colorado. Limerick gave a historical overview of the wartime internment of Japanese Americans and also sprinkled her speech with personal anecdotes of meeting and becoming friends with Gordon Hirabayashi, one of the three men who fought internment all the way to the U.S. Supreme Court.

Limerick was then joined by Min Mochizuki and Rose Tanaka, two internment survivors who shared stories of their imprisonment, including the controversial loyalty questionnaire all internees over the age of 17 were required to answer. Two questions in particular rankled Japanese Americans because they assumed these American citizens were loyal to Emperor Hirohito of Japan and asked if these prisoners would be willing to fight in the U.S. military.

Tanaka and Mochizuki’s personal perspective added a touching contemporary relevance to the historical facts and left audience members pondering the possibility of the injustice of ethnic imprisonment happening again.

It’s important for Mile High JACL to host this program — so that the lessons of the past won’t be forgotten. 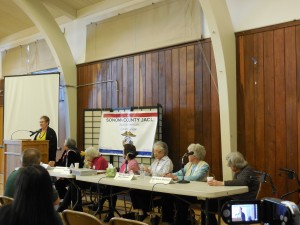 The event, held at the Enmanji Temple Memorial Hall, was attended by more than 100 community members.

Keynote speaker Susanne LaFaver shared the stories of her great aunt Margaret Matthew D’Ille, who helped Japanese internees during World War II at the Manzanar Detention Center as its community welfare director and head counselor. “Margaret loved and respected Japanese culture and people,” said LaFaver, recounting the life of Matthew D’Ille, who played a critical role in maintaining harmony at Manzanar. Matthew D’Ille was also instrumental in bridging the gap between Issei and Nisei, as well as the War Relocation Authority, because of her expert command of the Japanese language.

A panel discussion highlighting friendship stories between incarcerated Japanese Americans and non-Japanese was also held. Margaret Lowery talked about her experiences at Tule Lake, where she lived as a teenager with her father, who worked at Tule Lake Detention Center. She wrote a book “39 Months at Tule Lake,” based on her father’s journal.

Sonoma County residents Alice Kashiwagi, Margarette Murakami and Barbara Bertoli also shared their personal friendship stories and how they were supported by friends and neighbors in Sonoma County.  Elaine Richter, another local resident, reminisced about her friendship as a teen with Japanese American artist Chiura Obata and the sadness she experienced while assisting him to pack up his beloved art and art supplies as he prepared to leave for Tanforan Detention Center.

Participants were encouraged to learn from these stories of the past and carry a courageous heart forward by finding ways to support friends and neighbors in time of need.

“In many communities, people didn’t have an opportunity to learn about the prejudice. It is important that we continue this kind of conversation,” said LaFaver.