Naomi Ostwald-Kawamura will take over the reins from Tom Ikeda, founding executive director. 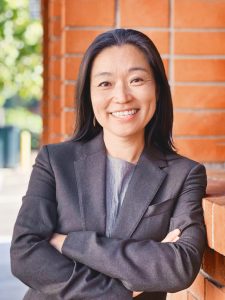 Naomi Ostwald-Kawamura has been named executive director of Densho, whose mission is to “preserve and share the history of the WWII incarceration of Japanese Americans to promote equity and justice today.” (Photo: Yumi Freitag)

After an exhaustive national and international search, the Densho Board of Directors is pleased to announce Ostwald-Kawamura as the organization’s next executive director. Ostwald-Kawamura officially joined Densho staff on Sept. 1 and will formally succeed Ikeda on Nov. 2.

“We are thrilled that Naomi Ostwald-Kawamura will be Densho’s next executive director,” wrote Densho Board Chair Ron Tanemura in an official statement. “We had a very competitive candidate pool, but as an educator with specialized knowledge of Japanese American history and with her strong background in nonprofit leadership and administration, Naomi has the rare combination of skills and experiences we were looking for. She has big shoes to fill, but there’s no doubt in my mind that she can do it — and that she’ll lead Densho, and our community, in exciting new directions.”

Until July, Ostwald-Kawamura served as the executive director of the Nikkei Place Foundation, a Japanese Canadian community-based organization in British Columbia, Canada.

Ostwald-Kawamura previously worked as the director of education at the San Diego History Center and currently serves as the board president of the Washington, D.C.-based Museum Education Roundtable. In that role, she spearheaded a three-year initiative to align MER’s organizational practices with its value commitments to equity, diversity and inclusion. She holds a master’s degree in education from the Harvard Graduate School of Education.

Ostwald-Kawamura’s deep interest in public history, collective memory practices and education led her to pursue a Ph.D. in curriculum and pedagogy at the University of British Columbia.

Her dissertation, which she will defend this fall, focuses on the intergenerational transfer of memory in the Japanese American and Japanese Canadian communities. Specifically, she focused on the unique challenges and issues that community history organizations face in light of the passing of those who survived the forcible removal and incarceration of people of Japanese descent in Canada and the United States.

“Making history relevant to people in the present is what animates the work that I do both in community and in my scholarship,” said Ostwald-Kawamura. “The executive director role at Densho bridges my personal commitments, scholarly interests and my professional experience into one unique opportunity. I feel inspired and honored to be working alongside the Densho staff and board — and cannot wait to immerse myself in the broader Densho community.”

Ostwald-Kawamura was selected unanimously by Densho’s board and staff search committee. According to Koya Partners, the firm that led the search for Densho’s next leader, this level of consensus very rarely happens in an executive search.

“There was a lot of excitement by the board and staff as we learned more and more about Naomi,” said Ikeda. “Naomi brings executive leadership, high emotional intelligence, operational experience, integrity and vision to all of her endeavors. I can’t wait to see how the organization evolves and innovates under her leadership.”

During her first two months at Densho, Ostwald-Kawamura will work alongside Ikeda. At the virtual Densho Gala on Nov. 2, she will deliver her first formal address to the Densho community and take on the role of executive director.

At that point, Ikeda will assume the role of senior adviser to the executive director through the remainder of 2022. This substantial overlap will ensure a smooth leadership transition and allow Ostwald-Kawamura time to familiarize herself with Densho operations, board and staff and the community-at-large before taking the helm.

Ostwald-Kawamura is a Shin-Nisei, born to Japanese immigrants in San Diego. Through both her work and educational pursuits, she has cultivated a deep intellectual and emotional connection to the legacy of Japanese American and Japanese Canadian World War II incarceration.

Naomi lives with her husband, Kai, who is a tenured professor at the University of British Columbia, and their daughter in Vancouver. In her role as Densho executive director, she is committed to building connection and community in Seattle.

As a graduate of the University of Washington, she has maintained a strong network of friends and family in Seattle and is looking forward to strengthening those relationships and building new ones.

“This is a once-in-a-lifetime opportunity,” said Ostwald-Kawamura. “I feel honored to have been selected to lead Densho, an organization that I have long admired and that has played such a critical role in preserving Japanese American historical memory.” 