A lot of us remember the responsibility of paying off student loans and how happy we were when that debt was cleared. We were raised with the expectation that education is the key to our futures. But along with that key comes the loans — loans that have ballooned in the years since I was in school.

New research from the Association of Young Americans and AARP shows that student loan debt is preventing Americans across three generations from saving for retirement or  buying a home.

As many students begin their academic year, nearly half of those with student loan debt say they owe more than $30,000. According to the Federal Reserve Bank of New York, borrowers have more than $1.4 trillion in student loan debt. The new research specifically shows that of those who have student debt, 45 percent of Millennials, 48 percent of Generation Xers and 50 percent of Baby Boomers owe $30,000 or more.

“AYA and AARP are working together because issues of financial security that include growing student loan debt are important to AARP’s members, their families and many Americans of all ages,” said AARP Senior VP Jean Setzfand. “Millennials, Gen Xers and Boomers have far more similarities than differences. This research highlights the long-term negative toll student loan debt has on multiple generations. The choice to fund you or your loved one’s education can boost your family’s future opportunities. However, due to the high cost of education, our joint research shows that the education decision should be considered in the context of other major financial decisions such as retirement savings, home ownership and paying for other necessities such as health care.”

Saving for Retirement — 4 in 10 (40 percent) say student loan debts have stopped him/her from saving for retirement, including 41 percent of Millennials, 38 percent of Gen Xers and 31 percent of Boomers. 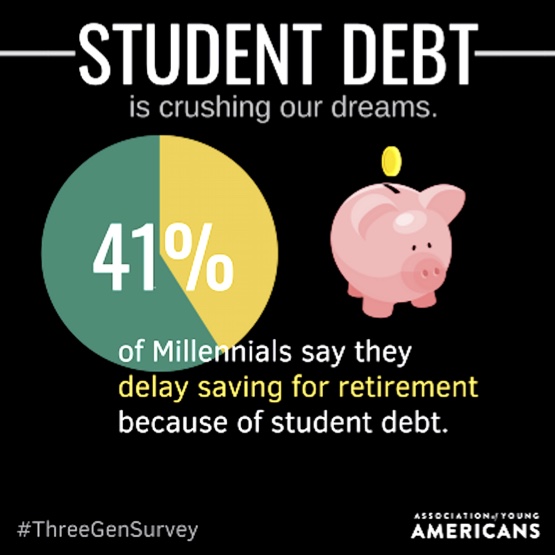 Buying a Home — 1 in 3 (32 percent) say student loan debt has prevented or delayed him/her from buying a home, including  36 percent of Millennials, 26 percent of  Gen Xers and 32 percent of Boomers.

Getting Health Care — Nearly 1 in 5 (16 percent) said student loan debt prevented or delayed him/her from getting needed health care, including 17 percent of Millennials, 16 percent of Gen Xers and 9 percent of Boomers.

Six in 10 Americans don’t view the benefits of college as worth the cost. Across generations, the views about college not being worth the cost held steady with 61 percent of Millennials,  62 percent of Gen Xers and 53 percent of  Boomers sharing the same view.

Americans believe major institutions can play a role in the cost of college and loan repayment:

3 in 4 (74 percent) agree strongly or somewhat that community colleges should be free for anyone who qualifies.

6 in 10 (66 percent) agree strongly or somewhat that colleges and universities should share the financial responsibility with students who default on their loans.

8 in 10 (86 percent) agree strongly or somewhat that state and federal government should invest in career and technical education programs as alternatives to college.

8 in 10 (79 percent) believe strongly or  somewhat that state governments should increase support for public universities so more people can afford college tuition.

These survey results don’t necessarily reflect the policy positions of AYA or AARP.

(Methodology: This poll was conducted via NORC’s AmeriSpeak nationally representative online panel for AARP from July 10-Aug. 7, 2018, with 4,862 adults between the ages of 18-74 encompassing Millennial, Generation X and Baby Boomer adults. The margin of error is +/-2.01% at the 95% confidence level.)