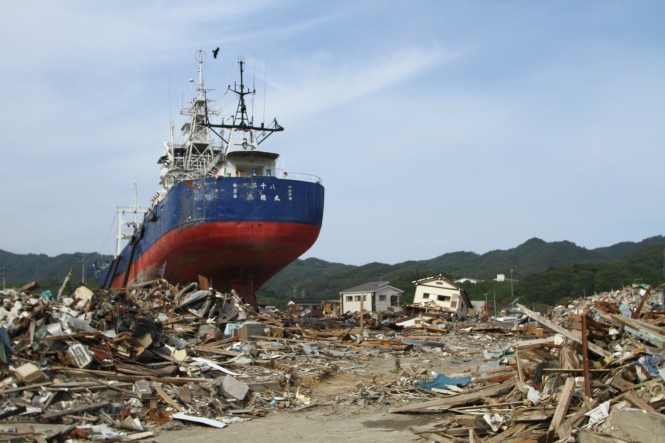 A fishing boat sits on dry land a quarter-mile from the ocean after a tsunami carried it inland after the magnitude 9.0 Great East Japan Earthquake and Tsunami that devastated the Tohoku region of Japan on March 11, 2011. Photos courtesy of ‘Stories from Tohoku”

The film ‘Stories From Tohoku’ premiered at CAAMFest 2014 and will be screened nationwide at select locations.

It was just over three years ago on March 11 when startling images of Japan’s devastating 9.0-magnitude earthquake and subsequent tsunami were broadcast around the world. Capturing personal stories of loss and resilience, those images moved a community of Japanese Americans thousands of miles away to give back.

Dianne Fukami, an independent film producer, was then board president of the Japanese Cultural Community Center of Northern California, when the calls and personal visits streamed in from those who wanted to help.

Following the lead of the community, nonprofit organizations mobilized relief efforts in the U.S. to help victims. The JCCCNC, Fukami says, raised $4 million to donate toward survivors of the devastation.

“So all of a sudden, community organizations — whether it was a local JACL group or a cultural center like us or the Little Tokyo organizations down in L.A. — were becoming repositories for donations,” Fukami said. “And we were thinking, ‘Wow! That’s amazing. What a great story. Somebody should do a documentary about it.’ Then we thought, ‘Why not us?’”

In late 2011, Fukami teamed up with co-director Eli Olson and producer Debra Nakatomi to begin “Stories From Tohoku,” a film that documents the relief efforts and stories of survivors from the northeastern region of Japan, which was leveled by the tsunami.

“I think probably the most personally riveting experience is sitting with the individuals and hearing their stories,” said Nakatomi, who served as producer. “Currently, there are still 98,000 people in the region that live in temporary housing. They will likely not return back to a more traditional home because recovery is very, very slow. So, when you see what their prospects are for the future, it’s very sad. But through it all, I think we were so encouraged, which we tried to capture in the film.”

The small film crew made four trips in total to the Tohoku region of Japan for the film “Stories From Tohoku,” which premiered March 15 at the Center for Asian American Media’s CAAMFest 2014.

“Listening to the survivors’ stories about losing everything and accepting those losses with resilience; I couldn’t even imagine. This resilience is a cultural trait, gaman — enduring the unbearable with dignity, and it became the recurring theme throughout the film,” said Eli Olson, the co-director, in a press release.

The film also captures volunteers like Olympic figure skater Kristi Yamaguchi, who traveled with an 18-member delegation from Project Aloha in October and November of 2011. The group visited Tokyo, Iwaki, Kesennuma, Sendai and Ishimomaki.

Other volunteers and philanthropists were also moved by the stories from survivors and made it their mission to make a difference in the tsunami-torn regions of Japan.

Dr. Paul Terasaki, an organ transplant scientist, sponsored 20 Los Angeles college students through the Terasaki Japan Education Tour to visit the region in June of 2012. Twenty-one-year-old Megan Ono, a senior at California State University, Long Beach, was one of those students. The trip, she says, changed her life.

“I had no idea what to expect,” said Ono. “I followed what everyone else saw on the news. When we first drove in there were just these huge stacks of cars, 10 cars high. It was like a movie of a warzone.”

Prior to seeing the devastation firsthand, Ono and her fellow college students in the Nikkei Student Union held a fundraiser called “Cranes for a Cause” that generated $14,000 for the Japanese Red Cross. Ono — who followed the news coverage of the earthquake, tsunami and nuclear disaster — says she still wasn’t prepared for the emotional impact of the trip.

“The thing that every survivor told us is that they want their story to be heard. They didn’t want people to forget. They wanted people to know that they’re still struggling,” Ono said. “So after I graduate, I definitely plan on going back, whether it’s to work there, live in Japan, to visit Tohoku and give back or reconnect with the relationships I made.”

Volunteers and the filmmakers who traveled to Tohoku took back with them souvenirs made from survivors and firsthand impressions.

“One house that I remember very distinctly looked like the people had just abandoned it very quickly,” said Fukami, of visiting Kesennuma. “There was a photo album on the living room floor, and in the dusky time of day, the wind was blowing and these pages of a photo album were sort of flapping — you could see all the photos in there. I didn’t touch them. It was just too previous for me to touch. I could see that there were family pictures in there, and I knew that those people would never come back.”

Fukami and Nakatomi, both Sansei who met in 2009 through an education delegation to Japan, say they have plans to air “Stories From Tohoku” on PBS in May. They are also hoping to get the film translated to air on Japanese television.

Nakatomi said they had ambitiously expected to finish the documentary by the first anniversary of the earthquake and tsunami. “We’re happy that it’s completed. We’re really encouraged by some of the early reviews that we’re getting.”

The film’s next stop is the Los Angeles Asian Pacific Film Festival on May 6-7 at the Japanese American National Museum’s Tateuchi Democracy Forum.

For more information about screenings of “Stories From Tohoku,” visit www.storiesfromtohoku.com.