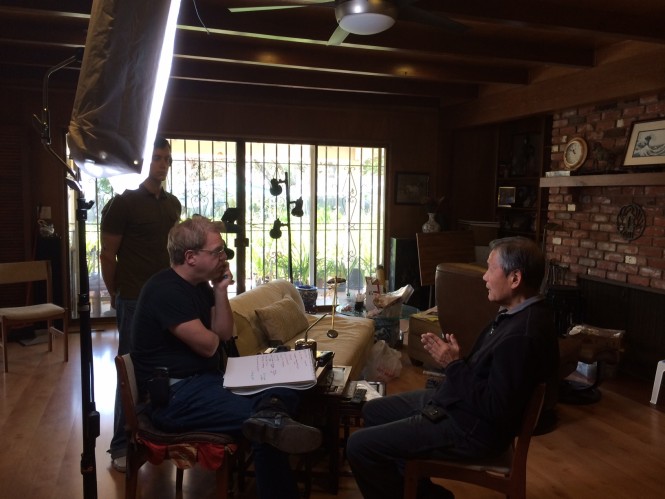 (Above) Writer-director Joe Fox, pictured at left, interviews Alan Nishio, who was the founder and co-chair of the National Coalition of Redress/Reparations and is the current Little Tokyo Service Center board president.

The Poston Community Alliance received a National Endowment for the Arts grant of $20,000 and will expand the documentary ‘For the Sake of the Children’ to include family stories from other WWII camps.

Every year since Monica Embrey was about 8 years old, she has dutifully traveled hundreds of miles from the cityscape of Los Angeles, Calif., to the desert of Manzanar. 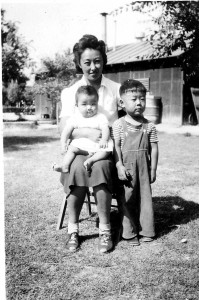 Misako Shigekawa had two children while incarcerated at Poston including daughter, Marlene, and son, Gerald. Marlene is the executive producer of a new documentary about mothers and their children. Photo courtesy if Marlene Shigekawa

Embrey, who is of mixed ethnicity, passionately recounts how the Japanese American side of her family was unjustly relocated to Manzanar after the bombing of Pearl Harbor. It is a chapter in the 27-year-old’s family history that she knows intimately thanks to her grandmother, Sue Kunitomi Embrey, who, despite outside pressures and cultural sentiment at the time, spoke out about the World War II incarceration of 120,000 persons of Japanese descent.

“I don’t think there’s a year I haven’t cried,” said Embrey, a North Carolina resident, who recently returned from the Manzanar Pilgrimage. “I definitely would not be the person I am had I not grown up learning about these experiences and hearing about my grandmother. She became the inspiration for my entire career path to be a community organizer and an advocate.”

Growing up in Chicago, Ill., Embrey’s grandmother, an activist and the former chair of the Manzanar Committee, visited her elementary school to talk about her wartime experiences. Before the war, the Kunitomis lived in Los Angeles’ Little Tokyo, where the father, Gonhichi, ran a transportation service until a truck accident ended his life in 1937. As a single-parent mother, Gonhichi’s wife, Komika, was able to scrape enough money together to purchase a grocery store in 1941.

Shortly after, however, the family would be forced to resell the store at a loss and relocate to Manzanar.

“My grandmother was 18 years old when Executive Order 9066 was signed. She and her eight siblings and my great-grandmother all moved from Little Tokyo to Manzanar,” said Embrey. “After several decades, she actually moved back to Los Angeles and became one of the foremost active people within the Japanese American community to organize and petition our government for redress. She formed in 1969 the first pilgrimage back.” 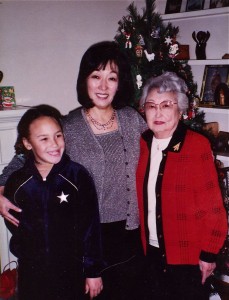 Embrey’s family story will be part of the new documentary “For the Sake of the Children,” which focuses on the multigenerational impact of the WWII mass incarceration of Japanese Americans. Produced by the Poston Community Alliance, the film originally focused on the struggle mothers endured to raise their children behind the barbwire of Poston.

“We wanted to focus in on women and their struggle. We began shooting in 2012 because we got a grant,” said the film’s executive producer Marlene Shigekawa of the National Park Service grant. “We decided to expand it to begin reviewing the descendants. So now we’re looking at four generations. The central question is, ‘What is the impact of the Japanese American internment on you and your family?’”

The film’s central focus is a topic with which Shigekawa is personally familiar. Her mother, Misako, gave birth to her and her brother at Poston in Arizona. Misako, then 103, was interviewed for the film six months before she died.

“We would hear stories about camp, and I would ask her questions, but I never really knew her underlying feelings in terms of feeling disgraced and shameful. It’s hard to articulate as a Nisei,” said Shigekawa of hearing her mother’s interview in the film. “But to have it actually expressed to the filmmakers was a bit shocking and enlightening and unbelievable. Also at the same time, very courageous.” 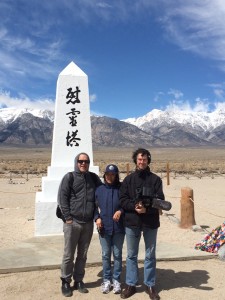 In addition to a previous grant received from the National Park Service, the Poston Community Alliance received $20,000 from the National Endowment for the Arts. The filmmakers are currently working to raise donations to match that grant. The additional grant monies will be used to expand “For the Sake of the Children,” to an hourlong film that will include family stories from other WWII camps.

“I think it’s important to capture various aspects of the camp experience and its impact,” said Alan Nishi, who was born in Manzanar and was interviewed for the documentary. “Most of the focus typically is on the camp survivors and not necessarily of the legacy of the camps on the subsequent generations.”

Nishi spoke in “For the Sake of the Children” about his personal recollections of Manzanar, where he was wrongfully incarcerated with this mother, father and sister.

“I didn’t find out that Manzanar was one of the concentration camps until I was a senior in college. At that time, the camp experience was never in history books. We’d never read about it, and it was never a discussion within families,” Nishi said. “It’s important to close some of that chapter. There continues to be Sansei today that do not talk about the camps. It continues to be a deep wound for many. I think it’s important to have a forum, have that shared, and hopefully it sets the basis for some conversation around dinner tables.”

For Embrey, the chance to participate in the documentary was an opportunity to continue the work her grandmother began decades ago by continuing to speak out about her family’s story of survival and resiliency.

“Memories can fade, especially when the people who actually lived them are no longer with us,” said Embrey. “It’s a responsibility for Sansei, Yonsei and the Japanese American community to remind the U.S. of the wrongs that were committed here and just what it took to make sure those wrongs were corrected and never repeated.”

For more information about the film, or to make an online donation, visit www.forthesakeofthechildren.blogspot.com.

For the Sake of the Children

To help the Poston Community Alliance match their $20,000 NEA grant, checks can be mailed to: