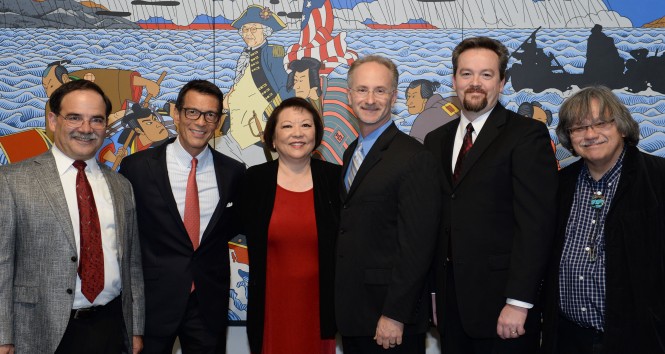 PULLMAN, WASH. — The first wet and stormy evening of fall didn’t dampen the spirits of those who watched the Emmy Award-winning documentary “Witness: The Legacy of Heart Mountain” at Washington State University on Oct. 15.

Following the special screening of the film, co-producers David Ono, a news anchor for ABC7 Los Angeles Eyewitness News, and award-winning editor and videographer Jeff MacIntyre, who also owns Content Media Group, received the question that they hoped they would hear.

WSU freshman Chandler Shannon said he was so moved by the film, and he asked the duo, “What can I do to make sure this story isn’t forgotten?”

The question provided Ono and MacIntyre the perfect opportunity to urge everyone in the audience to keep the story alive by sharing it with family members, college roommates, teachers and anyone who will listen.

The October 15 screening of “Witness” was part of an unprecedented series of campus events designed to educate citizens about the internment of Japanese and Japanese Americans during World War II. The event coincided a special Roger Shimomura exhibition in the WSU Museum of Art (closing Dec. 31), an exhibit put together by WSU’s Student Entertainment Board in the Compton Union Building Gallery displaying internment artifacts donated by WSU alumni (closing Nov 14), and a photo collection display of WSU’s George and Frank C. Hirahara Collection in the Terrell Library MASC. The father and son team snapped more than 2,000 photos of life in the Heart Mountain Relocation Camp in Wyoming while they were interned there during the war.

It was the WSU Hirahara Family Collection that inspired Ono and MacIntyre to create the “Witness” documentary.

“With the racial profiling we’ve seen since 9/11 and issues surrounding Fifth Amendment rights, this is one of those stories that should be at the top of everyone’s mind who is American,” Ono told the audience. MacIntyre added, “The lessons I learned while working on this documentary changed my life. History is not made by the weak and ordinary, but rather the strong and extraordinary.”

WSU junior Gregory Lew’s grandparents were sent to the Gila River Relocation Center in Arizona. Based upon the limited information they shared about their camp experience to Lew, he knew his grandparents had to be strong to survive.

“They told us stories of living in stinky stalls and feeling like animals,” Lew shared with the audience. “I’m so glad I came tonight to learn more about what so many Japanese Americans went through”

Prof. John Streamas said that many high school and college textbooks don’t include the topic of Japanese internment, and people are often shocked to learn something like this occurred in American history.

College of Communications staff member Jeff Snell grew up in Powell, Wyo., about 20 miles away from Heart Mountain. His family frequently drove by the Relocation Center, but said the U.S. government kept so quiet about what was happening there, the locals didn’t even know.

“Everybody called it the ‘Jap Camp,’” Snell recalled. “But it was never really talked about. In fact, it’s still not talked about much in Wyoming.”

Anna Maria Shannon, associate director of the WSU Museum of Art, said the film definitely got people talking on the WSU campus and in the Pullman community.

“Since the screening, people have been stopping me on the street and all around town asking how they can see the film and learn more about Japanese internment.”

By donating her grandfather and father’s photos to her father’s alma mater, Patti Hirahara wanted them preserved for future generations to see and learn from.

“It’s our hope that the WSU Hirahara Family Collection spurs conversations about Japanese internment for years to come,” Hirahara said. “I encourage all universities to plan similar campus-wide events.”

The day after the film screening, KWSU-TV and KTNW-TV aired the documentary on Northwest Public Television and plan to show it again in the new future.

“This has been a great series of events for our university,” said Daniel Bernardo, WSU provost and executive vp. “This important chapter of history is fading from memory, and it is important that we continue to tell the story.”

To view a complete list of Japanese internment events and activities at WSU, visit http://museum.wsu.edu/events.html.