The husband-and-wife team of Dr. Mikio Sankey and Dr. Jikun Kathy Sankey have treated thousands of patients over the past four decades. (Photo: George Toshio Johnston)

Ancient medicine techniques can help one reach a more peaceful, desirable state — healing both the mind and body.

[dropcap]I[/dropcap]t was just another, routine Los Angeles day. A young woman was driving to her administrative desk job when a thought came into her mind that would forever alter the course of her life.

Acupuncture, known as hari in Japanese, originated in China centuries ago and spread throughout Asia, but it became widely known to Westerners after President Richard Nixon famously opened the doors to diplomatic recognition for the People’s Republic of China in 1972.

The ancient approach to healing uses special needles to pierce specific points on the body to stimulate and unblock the flow of energy (chi in Chinese, ki in Japanese) to help the body heal itself. 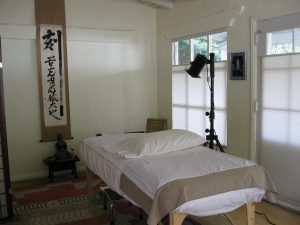 Although she didn’t know how to go about becoming an acupuncturist, Sankey’s feeling was so strong, it could not be denied.

“I had goosebumps from head to toe,” she recalled. “I thought, ‘It’s genetic, it’s in the DNA, it’s really real,’ because I had not planned on being a healer in my life. It’s just this thing that bonked me on the head.”

Fast-forwarding from when she had her “stop sign epiphany,” Kathy and husband Dr. Mikio Sankey, also a practicing, licensed acupuncturist, have over the subsequent decades treated in her estimation “thousands” of patients from their base of operations

Looking back, however, Sankey doesn’t recall from her childhood having any foreshadowing that healing would be part of her life’s path, although she does remember growing up in Okinawa, where her maternal grandmother “used moxibustion on the back of my grandfather.” She also watched her grandmother, whose name was Mahataa, prepare a bitter herbal soup that used an octopus ink sac.

“So, I had some exposure to ancient medicine from the medicine women of Okinawa,” she said. “But those are the only two things I can pluck from my conscious mind.”

A Calling to Heal

One thing Sankey did know — she had to heed this epiphany. In her ancestral homeland of Okinawa, she was told that “when a woman, usually late in life, had some kind of bizarre occurrence where they would know their calling and if they didn’t follow that calling, something terrible would happen to them.”

As luck — or destiny, perhaps — would have it, a fellow tai chi chuan student she asked for leads on a local acupuncture teacher with whom to study or a school to attend suggested she talk with a mutual acquaintance who, coincidentally, was about to begin studying acupuncture in Los Angeles. They chatted, and Sankey had a path, enrolling immediately at L.A.’s California Acupuncture College.

That was in 1981. Fast-forwarding from when she had her “stop sign epiphany,” Kathy and husband Dr. Mikio Sankey, also a practicing, licensed acupuncturist, have over the subsequent decades treated in her estimation “thousands” of patients from their base of operations in Los Angeles County. “We’ve never advertised. It’s all word of mouth,” she said.

Drs. Sankey and Sankey have treated their patients using methods derived from traditional Chinese medicine, but also by incorporating other alternative approaches, including nutritional regimens like utilizing a diet of fresh, raw, organic foods.

Acupuncture is just one of Kathy Sankey’s pillars for a healthful life. As mentioned, she has practiced tai chi chuan since 1978.

Dr. Jikun Kathy Sankey in the One Drop Zendō of Los Angeles, which opened its doors in 1997. (Photo: George Toshio Johnston)

“The other part of my path has been the Rinzai Zen training. Again, all of this has been kind of an intuitive thing for me. It pops into my head, and I just do it. I don’t question it because it’s so strong and it’s so powerful, this pull I have in these directions.”

Having studied zazen, or seated meditation, for more than 20 years with Japan’s Shodo Harada Rōshi, Sankey — who goes by her dharma name Jikun in her Zen circles — also has operated since 1997 the Los Angeles One Drop Zendō.

“I think meditation is critical,” she says. “You could sit in a chair, you could be lying in bed, because it’s about clarifying the mind. Mind precedes everything.”

Mikio Sankey, in the meantime, has developed an advanced energy healing system he calls esoteric acupuncture. According to the website esotericacupuncture.net, esoteric acupuncture uses “various means other than acupuncture needles including — but not limited to — crystal, tuning forks, magnets, Therapeutic Grade Essential Oils (especially the oils by Energy Tools), selenite tools by Tom Ledder of Colorado, gemstones, sound, toning voice and other means.”

He has also authored a series books on the topic of esoteric acupuncture — but warns that “these are not for the general public” but, rather, aimed at “people who are in the more spiritual endeavors.”

Having had a lifelong interest in music, Mikio Sankey has returned recently to focus on making music in a genre that he calls American journey — “a little Asian, a little Latin, a little jazz, a little R&B, a little rock “— and it’s part of healing, as he defines it. “Both are related, in a bigger sense,” he said.

The addition of the music he calls American journey, then, appears to be a meaningful fit.

Not that it’s a competition, but with her husband having authored seven books on esoteric acupuncture, Kathy Sankey has also authored a novel, titled “My Name Is Mahataa,” inspired by her maternal grandmother, and she is working on a prequel — when she’s not treating patients and conducting meditation sessions in the One Drop Zendō.

But having been on the path of healing for so long, is retirement something that is in the cards for Drs. Sankey and Sankey?

Drs. Sankey and Sankey can be reached via email at DrsSankeyandSankey@yahoo.com or by calling (310) 673-8225. For more information, visit onedropzen.org/community/usa/odz_los_angeles and esotericacupuncture.com/.